Feel Good of the Day: First Grader Wins National Handwriting Award, Despite Being Born Without Hands 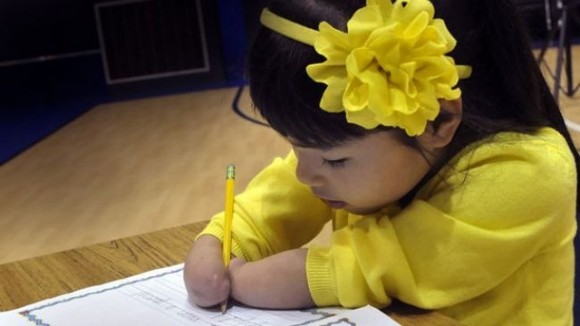 According to her mom, Annie Clark seemed overwhelmed when contest organizers from textbook publishers Zaner-Bloser announced that she was the winner of a national penmanship contest, but as the first grader received her trophy, things appeared to sink in, and a big smile made an appearance. Though Annie was born without hands, her adoptive parents say she’s determined to do pretty much anything the other kids can do, whether it’s bike riding, swimming, or even simply writing, and she’s succeeded on all fronts.

Annie’s teachers entered her writing samples in the National contest after she won her own school’s penmanship awards.

Annie’s handwriting sample was chosen as the Grade Level Winner for the first grade at Wilson Christian Academy, and when her sample was sent in along with the other grade level winners, teacher Linda Messner included a letter explaining that Annie was born without hands.

Ms. Wright said that letter prompted contest organizers to forward Annie’s writing sample to the competition for disabled students. The award was created to honor Nicholas Maxim, a fifth-grade student from Maine born without hands or lower arms, who entered the Zaner-Bloser competition last year. To be eligible, a student must have a cognitive delay or intellectual, physical or development disability.

Annie was awarded a thousand dollar check, a pretty sweet trophy, and surely the admiration of her peers. When questioned about her future plans, she agreed that she might write a book someday. About what, though? “I don’t know. Maybe… animals?”

We’d read it. You can see Annie’s cute post-award interview at Gizmodo.

(The Pittsburgh Post-Gazette via Gizmodo.)