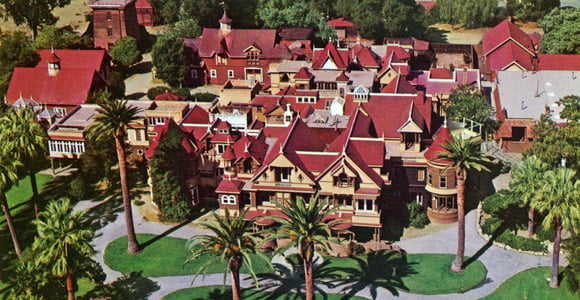 When I first heard about the Winchester Mystery House in California, I instantly fell in love. A mansion owned by the eccentric Sarah Winchester, who had construction going on the home 24-hours a day while she lived in order to fend off the curse that plagued her family (because of their work in the gun business). What? You’ve never heard about this amazing story before? Well read on folks, I’m going to tell you all about it and why a movie is long overdue.

Winchester, the wife of William Wirt Winchester, became the owner of the now famous estate and 50% of the Winchester Repeating Arms Company. Their only child passed away from the childhood disease marasmus a few weeks after birth and William died of tuberculosis in 1881, leaving Sarah the business but in a deep depression.

Winchester became convinced she was being haunted by those who were killed by Winchester rifles after visiting a medium. She moved to San Jose, California where she began building a mansion and didn’t stop until her death in 1922, disproving the theory that by continually building onto the home, she would never die.

The Winchester House started as an eight-room farmhouse, grew to over seven stories high through construction and stands at four since the 1906 earthquake. There are over 160 rooms on 4.5 acres. Among the quirks of the property are staircases that lead to nowhere, doors that lead to open space (with nothing underneath it), and the repetition of the number 13 throughout the property (she also had a dedicated séance room). Winchester purposely designed the house in such a strange manner to trap the ghosts she thought were haunting her. The house also featured numerous modern conveniences that weren’t common at the time such as forced heating, indoor plumbing and elevators. Construction immediately ceased when Winchester passed away from heart failure on September 5, 1922.

And now you understand my obsession with the story and confusion as to why a film hasn’t been made before now (although I’ve seen several documentaries).

According to Deadline the production house “Hammer has optioned the rights to the story of the San Jose, California-based Winchester Mystery House which is considered the world’s most haunted. The studio is developing and producing a feature with Imagination Design Works and Nine/8 Entertainment.”

And yes, they’re going to shoot in the real house.

The house is currently a tourist site owned by Winchester Investments LLC, and every Friday the 13th a large bell on the property is rung 13 times at 1 p.m. in tribute to Mrs. Winchester.

There was a dramatized horror film released in 2009 called Haunting of Winchester House which was not associated with the mansion and that Winchester Investments sued over copyright infringement and use of the name and story. Although Hammer has secured the rights to the story, it’s not yet clear what they’ll do with it.

I’d love it if they stuck to a true-life tale because the story sells itself. You can learn more about the Winchester Mystery House and check out some of the architecture yourself on their official website. I totally volunteer to play a really annoyed construction worker.