This Just In: William Shatner Has A Lot Of Opinions About Sailor Moon 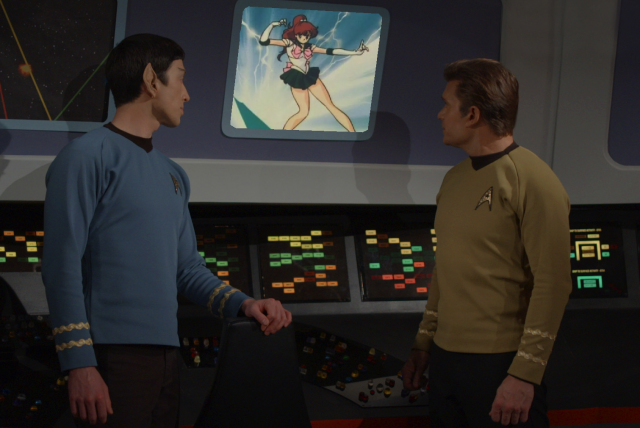 Today in “stuff that is surreally relevant to your very specific fandom interests,” Captain Kirk uses a picture of Supernatural‘s Castiel and Kevin Tran to have a conversation about Sailor Jupiter. I am not making that up. It actually happened.

I am, of course, referring to William Shatner’s Twitter, which as we all know is a minefield of hilarity and strangeness. In between livetweeting episodes of Castle and checking in on the International Space Station, the Shat took some time to tweet out this picture of Misha Collins and Osric Chau bein’ silly.

The Internet, of course, responded in kind:

You know what is even more frightening than that photo? People correcting me telling me that it’s Sailor Jupiter’s outfit!

That’s when it started to get weird:

Wasn’t Sailor Jupiter a giantess? Is that part of the ‘in joke’, too? — William Shatner (@WilliamShatner) October 19, 2014

I can’t decide which I want to believe more: that William Shatner already came into the discussion with a working level of knowledge about Sailor Moon, or that he googled Sailor Jupiter after being corrected in order to come up with more ways to make fun of Osric Chau, and then decided to keep going so he could school randos on Twitter. Either way, sir, you are my hero. Never stop tweeting.

(via William Shatner on Twitter, image via Star Trek Continues)