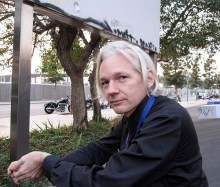 After the U.K. Supreme Court ruled against him and blocked an attempt to appeal, Wikileaks creator Julian Assange seems to be running out of options. Facing extradition to Sweden over accusations of rape and sexual molestation, Assange yesterday fled to the Ecuadorian embassy in the U.K. and is seeking political asylum.

For the past two years, Assange has been out on bail while fighting the extradition order against him. All the while he has claimed that though he did have sex with both the former Wikileaks volunteers who accuse him, that it was consensual, and that the charges are politically motivated.

In a statement, the Embassy of Ecuador announced it was extending temporary protection to Assange while considering his case.

While the department assesses Mr Assange’s application, Mr Assange will remain at the embassy, under the protection of the Ecuadorian Government.

The decision to consider Mr Assange’s application for protective asylum should in no way be interpreted as the Government of Ecuador interfering in the judicial processes of either the United Kingdom or Sweden.

Unfortunately, this may only buy Assange some more time. Even if Ecuador agrees to grant him political asylum, Assange has broken the law by skipping bail and could be arrested as soon as he leaves the embassy. From The Guardian:

It is for the Ecuadorians to decide whether they want to annoy the UK, the EU and, no doubt, the US by offering Assange asylum. But to do so might be something of an empty gesture. The police will not enter a foreign embassy to make an arrest. But short of giving Assange Ecuadorian diplomatic status or hiding him in a rather large diplomatic bag, there seems no way in which he can get to Heathrow, let alone Ecuador, without being arrested for breach of his bail conditions.

The Guardian goes on to say that Assange’s major concern might not be the charges he faces in Sweden, but rather a fear that he would then be extradited to the U.S. and face charges of espionage for all the secrets he’s spilled. However, this might be something of a moot point. Again, from the Guardian:

If it turned out that this was simply a pretext for handing him over to the Americans, Sweden would risk breaching article 28 of the EU framework decision that forms the basis of the European arrest warrant. The home secretary’s consent would be required under section 58 of the Extradition Act 2003 before Sweden could order Assange’s extradition to a third state.

That said, Assange can be less sure about what would happen to him after all legal proceedings in Sweden are concluded. But even if the Americans ask for his extradition at that stage, Sweden would not agree to extradite him unless the US undertook that he would not face the death penalty on conviction.

Once again, Assange has delayed destiny, but his options seem to be running out fast. The choice of Ecuador is also a bit odd, though it likely has to do with the country’s support of the Universal Declaration of Human Rights which deals with asylum cases. Personally, I would have thought that Iceland, which has worked to make itself a data-haven and even had a Wikileaks supporter as member of Parliament, would have made a better choice.

Stay tuned for the next chapter in this unfolding drama.

(via Wired, The U.K. Guardian)