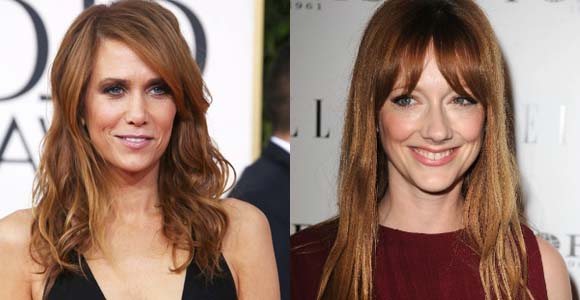 Two comediennes have reasons to smile today. Kristin Wiig has officially signed on for Anchorman: The Legend Continues and Judy Greer has just gotten a rather large advance for her new book, I Don’t Know What You Know Me From: Confessions of a Co-Star.

The Hollywood Reporter says Saturday Night Live alum Wiig will join Will Ferrell, Christina Applegate, Paul Rudd, Steve Carrell and Dave Koechner in the sequel to the 2004 comedy. No word yet on who she will play.

Director Adam McKay made the announcement on his Facebook page last night saying he “couldn’t be more excited.” Applegate took to Twitter to say, “So excited Kristen Wiig has joined our cast for anchorman2. Going 2 b best movie ever made. Besides the best movies ever made.”

Also from The Hollywood Reporter, Arrested Development and Archer actress Greer has secured a deal with Random House for her first book. Sources are saying her advance is nearly $1 million.

THR writes, “The book will include humorous essays with titles like ‘Celebrities I’ve Peed Next To,’ ‘I’m Not America’s Sweetheart, I’m America’s Best Friend’ and ‘Bad Oscar!’ that chronicle Greer’s life from her childhood in the Midwest to her success as an actress in such films and TV shows as Two and a Half Men and 27 Dresses.”

“This is who I am. This is what I think about things. This is stuff that happened to me, that could have just as easily have happened to you,” Greer said in a statement. “I think I am really lucky to be where I am in life, but I’ve never really lost that feeling that I don’t fit in, and if you have, will you please email me and tell me how you did it? I’m serious.”