Wiccans Not Thrilled With the Fictional Wiccan on True Blood 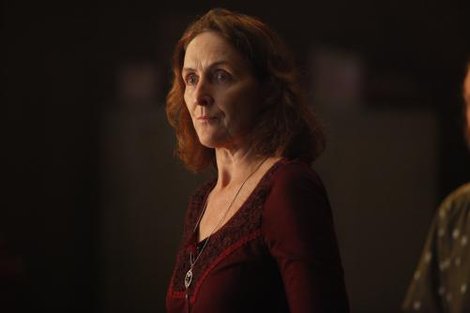 Real wiccans, upon viewing a fictional character on the fictional supernatural show True Blood, are upset about the wiccan character currently featured in the show’s fourth season, Marnie Stonebrook (Fiona Shaw). They think she’s doing things that are unbecoming of a witch, like giving up her vow to do no harm with her magic so she can allow herself to be possessed by another dead witch and forego all her own control. This would matter, if True Blood was a documentary. And it’s not.

First, this is not meant to mock the practice or religion of wicca. In fact, it was being practiced long before several other religions, and it absolutely deserves the same recognition and respect. However, when someone overreacts to a fictional portrayal of something, it’s worth pointing out some of the sillier aspects of the complaint. Like this statement from Elaanie Stormbender, a practicing witch and mom of five:

“When witches invoke a spirit, they take precautions and retain full control to banish … Marnie didn’t stay in control, so she’s entirely to blame for giving herself over to being possessed.”

Apparently, what Marnie has done on the show that has wiccans up in arms is something that no “good” witch would ever do. For one thing, she tries to do magic that is beyond her ability. For another, she allows the spirit of a dead witch (who is bent on doing harm to others) to take control of her body and possess her, relinquishing her own powers in favor of this evil spirit. That is something that is not only not typical of a witch, but against what they have vowed to do with their magical powers (to do no harm). In a nutshell, Marnie Stonebrook is partaking in unethical behavior. Says one witch, who provided her magical name Taarna RavenHawk and is also a biology professor:

“When Marnie gives up her ‘power within,’ which is a witch’s ability to practice the craft without harming others, it allows possession by Antonia who becomes the controlling entity. Marnie lets it happen. It’s unconscionable a witch would act this way.”

Wiccans have a right to be concerned with how they are portrayed in the media. But the whole point of Marnie Stonebrook is not to provide the public with a typical wiccan character — because featuring a typical anything on a show like True Blood would be boring. Nobody is typical on that show, and what makes a character exciting is that they deviate from the norm. Could True Blood eventually incorporate a witch who is more by-the-book? They could, but right now, their resident witch is flawed, and that makes her interesting to watch. And even wiccans agree with this:

“My witch friends are rabid fans of ‘True Blood,’ and watch it every week,” said Ellen Dugan, a witch and priestess of a six-member coven she co-founded in St. Louis, Missouri.

Dugan, the author of “Practical Protection Magick” and “Natural Witchery,” conceded that Marnie’s portrayal contains a sensational element, but noted that her witch friends laughed during a recent levitation scene.

“Most witches have a good enough sense of humor,” she said.

Marnie Stonebrook is a bad example of a witch. But she was never meant to set an example for other witches in the first place. Let’s not get too upset about this.