Why Sense8‘s Nomi and Amanita Are Everything (to Me) 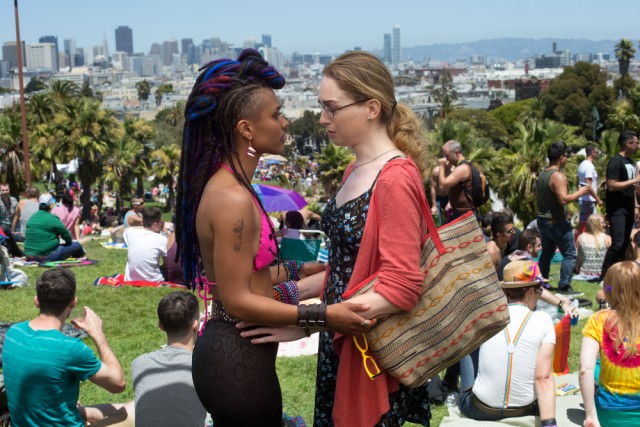 Many of you have reached out to us asking if/when we’d be covering the new Wachowski/Straczynski Netflix series, Sense8. Short answer? Yes we are! After all, it has all the earmarks of something that TMS would love (and love to talk about), right? A diverse cast, a trans female creator, and a story that digs deep into issues of race, gender, and class. There are straight-up reviews/recaps coming up. But for now, since it happens to be Trans Pride weekend in L.A, where I live, I wanted to write something a little more personal about Sense8. Specifically, about the relationship between Nomi (Jamie Clayton) and Amanita (Freema Agyeman). [If you haven’t yet watched Sense8, there may be some light spoilers! You’ve been warned.]

This isn’t something that I’ve really written about publicly before – though it wasn’t exactly a secret either – but now I’m at liberty to talk about it in my writing. My wonderful partner of two and a half years is a trans woman. I have a girlfriend!! And I announce this using exclamations for several reasons:

What one notices from the moment the couple makes their first appearance in the pilot, “Limbic Resonance,” is that they are a completely happy, healthy, completely in-love couple, that any problems they experience are external, and that they are always down to support each other. What’s more, they’re each individually awesome characters. Nomi is an intelligent, sensitive, brave human being who despite having everyone – from her own family, to Mr. Whispers’ secret organization coming after the sensates (the main characters in Sense8, who are mentally and emotionally linked to each other) – hunt her down and attack her for various reasons, has the courage and the strength to keep going and to use her brilliant hacking skills to help herself, and later, help her new sensate friends. Of course, a huge part of her strength comes from the love and support of Amanita, a woman who is so loyal and loves Nomi so much that she’s willing to start a fire in the hospital where Nomi is being held against her will to sneak her out. Perhaps due to her hippy-mom upbringing, Amanita never questions Nomi when Nomi tells her that she has other people in her head. She knows Nomi well enough to know that this isn’t “crazy.” Something real is happening, and all she wants to do is help. Their individual strengths as people make them even stronger together, and their love seals that.

It’s amazing (and it shouldn’t be such a novelty, but it is) to see such a solid romantic relationship between a cis woman and a trans woman. It got me thinking about another Netflix show that features a trans female character, Laverne Cox’s Sophia Burset on Orange is the New Black. On that show, while Sophia and her wife split up not over her being trans, but over the criminal activity she engaged in to transition, it shows a cis-trans relationship in trouble – as if to say Unhappiness for these two was inevitable if they remained together. On Sense8, we see a cis-trans relationship that works, and for this cis woman, it’s a much-needed and much-appreciated bit of representation. When I first told my family and friends about my girlfriend, the near-universal response was Are you sure you’re happy? While I was grateful that their only concern was my happiness, it also saddened me a bit that it seemed so impossible to them that this relationship could make me happy that they asked me this several times. I think that a better understanding about what being trans is, and greater visibility of trans characters in relationships in media can go a long way toward showing well-meaning people like my family and friends that being in love with a trans person is not only possible, but can be hugely rewarding. Sense8 does this. 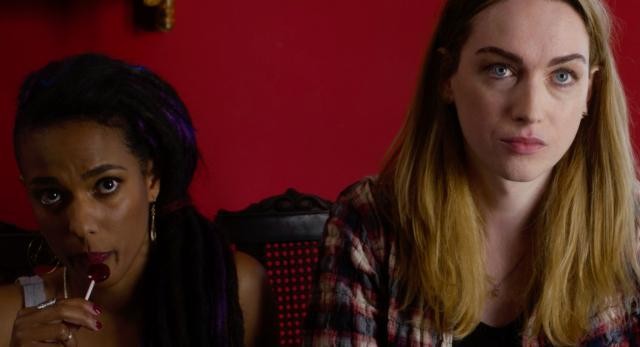 Speaking of being the cis half of a cis-trans relationship, another thing I love about Nomi and Amanita is Amanita’s honesty about the beginning of their relationship. In Episode 5, “Art is Like Religion,” Nomi tells Amanita how impossible what’s happening to her (being a sensate) seems. Amanita says:

Not so long ago, the idea of someone like me; someone with my crazy thoughts, my desires – someone with this kind of hair – would’ve been impossible in this world. Just as there was a time in my life when the idea of me falling in love with someone like you – honestly – even I would’ve said it was impossible. And yet, there we are…and from the moment my two lips touched these two lips, I learned one of the most important lessons of my life. Impossibility is a kiss away from reality.

While Amanita is a lesbian (as far as I know – so far, we haven’t seen her express interest in men or say anything on the subject other than the above quote), and I’m not, I identify with this moment so much. Because yes, there were reservations when my girlfriend came out to me. In a trans-cis/lesbian-heteroflexible relationship, there’s obviously everything that’s going on with the trans person and their transition, but there are also huge changes for the cis person. Suddenly, that person is in a queer relationship that they didn’t necessarily sign up for. For Amanita, who likely had only had experience with cisgender lesbians, falling in love with a trans woman was pretty unexpected. For me, the unexpected thing was having the person who was presenting as male to me in the beginning of our relationship tell me that she was a trans lesbian. It’s a lot to take in. But as I said above – Life’s crazy, yo. And the unexpected things are also potentially filled with unexpected joy. I love that Sense8, in one brief scene, acknowledged that, without allowing it to cast a pall over the whole relationship.

Lastly, I have to say it, the sex scenes between Nomi and Amanita are hot! Not only are they hot, but they feel real. They’re not filmed for the male gaze. They are each honest portrayals of what happens in bed between two women who love each other. It’s pretty amazing to watch.

I love Nomi’s brilliance, and I love Amanita’s respect for Nomi’s brilliance. I love Amanita’s intuition and fierce loyalty, and I love that Nomi draws strength from that. And I love Jamie Clayton and Freema Agyeman’s performances in their roles. They make me want to squee with happiness at what’s possible in this big, beautiful world. A tip for The Wachowskis and Mr. Straczynski for Season 2? My girlfriend is Jewish, and I’m Puerto Rican, and there are layers of cultural stuff that we’re now navigating in the course of our relationship. With Nomi being white and Amanita being black (with a white mother, no less), I would love to see Season 2 bring some more intersectionality into this shizz! If any show is capable of doing that, it’s Sense8.

So, thank you Andy and Lana, J. Michael, Jamie, and Freema for allowing me to see myself and my beautiful girlfriend on screen in a show that’s getting attention. It means everything.