Because the same people that go to Comic Con go to Dom Con. 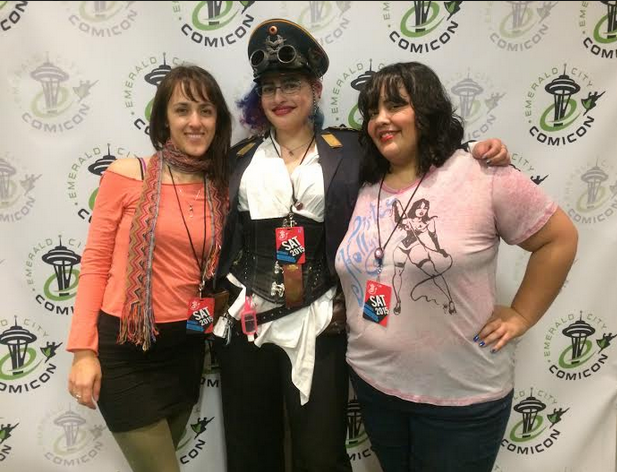 De Blas, Lady Anastasia, and me after a successful panel. 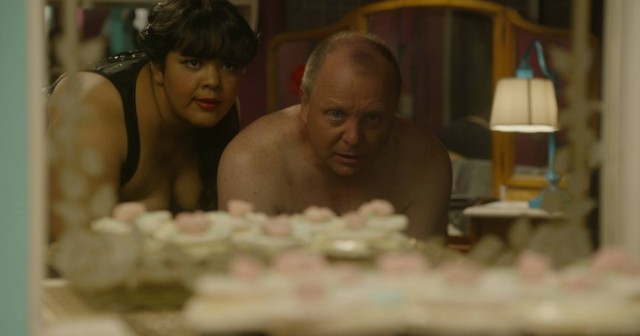 Joining me on the panel were Incredible Girl creator, producer, and one of its stars, Celia Aurora de Blas; geek, submissive, and host of the Polyamory Weekly podcast, Cunning Minx; and geeky pro domme, sex educator, and host of L.A’s only queer, pansexual kinky play party, Pangaea, Lady Anastasia (aka Communatrix, aka H.P. Loveshaft – heh). They all brought amazing insights to the discussion.

The panel seemed to agree that more people are kinky than think they are. However, Lady Anastasia asserted that identifying as kinky is extremely important because more people are kinky than think they are, yet labor under the false notion that they’re “the only weirdo. As a pro domme, I see a lot of people with super-pedestrian fetishes like – Oh, I can never tell my wife that I want my nipples played with while I tell her that she’s beautiful. And it’s like, Oh my goodness! How scandalous!”

Cunning Minx added to that point by reminding us of the power of self-identifying out loud so that we can see the diversity in types of fetishes and interests, saying “It’s on a scale, right? As you say, some people think of nipple play as super-kinky, and if it is for you – awesome! Other people who are hung upside-down and lit on fire with wax dripping off them from their nipples and their nads are like That was just a Tuesday…whatever works for you.”

De Blas added that the differences in degrees has to do with where individual people may feel, or have felt, repressed. “What are you holding back, and what is okay versus what you think is not okay. And those thresholds are completely different for every person.” As for the specific correlation between geeks and kink, Minx had this to say:

Once you have self-identified as someone who is a societal misfit by doing things like going to renaissance fairs – once you’ve thrown aside some of your typical, mainstream paradigms, it becomes easier to accept a couple of other things that are outside of the norm, like polyamory or kink. Apart from that – I’m not gonna say that kinky and poly people are more open-minded, but I think we’re just more comfortable with being weird, and liking what we like and doing what we do. As opposed to feeling like what you see portrayed on TV is the only way to be.

For Anastasia, it all boils down to fantasy, and she ended up having what we thought was the Quote of the Day:

Nerds are the people who, when we were growing up we were like Swordfights and mermaids! And then we got older, and we were like We’re gonna keep doing fantasy, just…without our pants on. And the rest of the world was like Kinky…

Where the panel really got going, though, was when we opened up into a dialogue with the audience, who by the way, were the world’s coolest people. 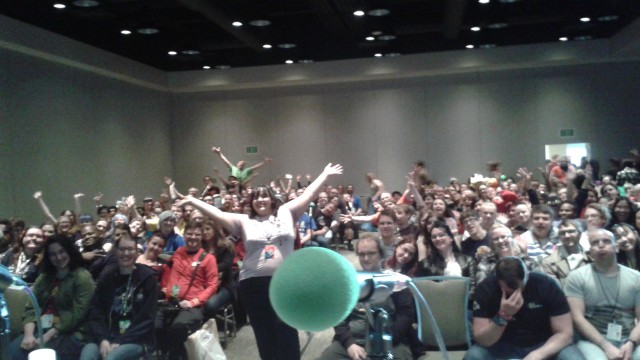 Me and the full-house just before the panel. These folks were rad.

There was a lot of talk of kink in geeky stories. We discussed Wonder Woman, and Jadzia Dax and Worf on Deep Space Nine. We talked about Buffy and Spike bringing a building down with sex. Then the audience gave us some awesome suggestions as to kinky storylines and pairings in geek properties that they identified with. It was amazing to me, not only how many people came out to this panel, but how open and vulnerable and outgoing they were with us. Minx might not have wanted to say this, but I’ll assert that I think geeks do tend to be more open-minded and tolerant than most people! So there!

And then, of course, there’s Incredible Girl, the digital series we were there to promote in the first place. We screened some teaser footage that I sadly can’t share on the internet just yet, but what I can do is tell you a little about the show. From the Incredible Girl website:

Family drama, romance and humor irreverently come together in this female-led, rite-of-passage digital series that confounds expectations about who and how you should love.

We were thrilled with how the teaser footage we screened resonated with people, and ended up hanging out outside Hall D afterward chatting and answering questions about the show, as well as how people can find more information about how to research kink and polyamory in a safe way. We not only shilled our web content, but we were providing an actual, much-needed service for the people in attendance. We reminded them they’re not alone, and that their interests don’t mark them as weirdos.

Despite the panel being understaffed and our technical snafus  (we had technical difficulties that no one from ECCC was around to fix, and some audience members ended up helping us with), the Incredible Girl Presents: Geeks and Kink panel was a huge success. We hope to take this panel to other conventions as well, so keep an eye out! Follow Incredible Girl on Facebook and Twitter, and we hope to see all you perverts soon at a con near you!