Why A Geek Site for Women?

There are a few questions that been following me around ever since ever since we decided to do The Mary Sue, even before we knew it would be called The Mary Sue, and they come up again almost every time someone that I’m talking to comes up against the idea of a geek site specifically for women.

“Why a geek site specifically for women?”

Now, some of these people aren’t putting any particular slant on these words, they’re just genuinely interested in what the nerdy female has to say that needs a whole website to contain it.  But some of these people are concerned that the entire idea of a site just for girl geeks is counterproductive at best, and sexist pandering at worst.

The Mary Sue is here to say one thing, and one thing emphatically: skeptical geek women, we know where you are coming from.

We know the point at which you would be satisfied is to just be able to geek out with all geeks, of any gender, without feeling like your femininity is front and center for scrutiny.  To not feel like you have to work harder than guys to prove that you’re genuinely into geek culture. We want simple things, like to be able to visit a comic book store without feeling out of place.  To be able to buy a video game without getting the sense that the cashier thinks we’re buying it for someone else.

But mainly we just want to be able to pursue our hobbies with the other people who share them.  We want to play with the boys.

So there are two reasons why there should be more out there devoted specifically to the female geek.

Because even if we want to play with the boys, there is a value to having our own space.

Until advertisers, producers (of, say, The Big Bang Theory), and the larger society cease to assume that if you’re into sci-fi or videogames then you’re universally male; until the Big Two of American comics figure out that the way to get women to read comic books is not to pander to the demographic, but simply to make consistently good comics; until videogame makers finally figure out exactly why booth babes are flagrantly, shockingly sexist… the voice of the female geek needs to be heard.

And not just in a weekly column on a larger site, or whenever specifically gendered news comes up, or with the occasional list of Hollywood’s Hottest Geeky Women.  (Those lists are very flattering, but they’re not for geek women.  They’re for straight geek guys.)  Geek women don’t just exist when we’re reacting to things that we find offensive, or when the more famous of us are featured in an article.  We’ve been here the whole time, watching stop-motion Lego videos, waiting for trailers, hoping for Comic Con news, picking up comics on Wednesday nights, and pressing A or X to continue.

And also, because of this: 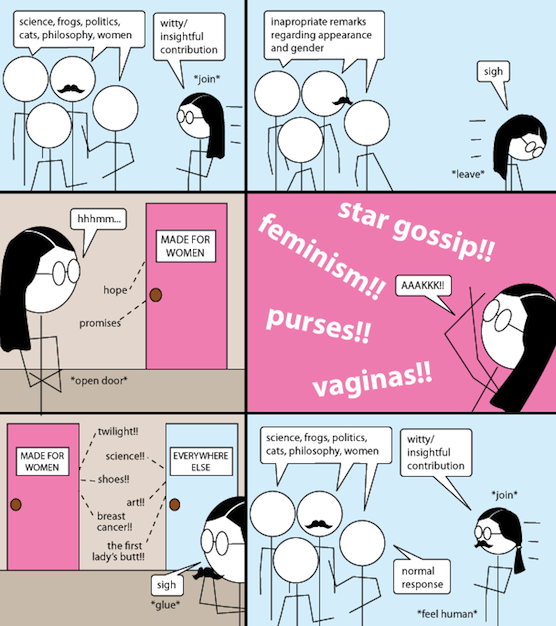 (This comic was submitted to Reddit in December of 2010, and my feeble attempts to keep track of its creator have failed.  If this is your comic, drop us a line, we’d love to credit you.)

I have never met a geek girl who was even halfway interested in almost anything Cosmopolitan had to say.  We were too busy reading Cicada and Popular Science when we were the age that Teen Magazine wanted our attention.  I’ve rarely seen a “women’s” site that seemed to report on much that I was half-way interested in.  The only celebrity gossip I care about is who’s on what project next, the only fashion I’m interested is where to get Batman shirts that allow for boobs.  It took me months to realize that Eat, Pray, Love wasn’t actually Eat, Prey, Love (“That’s sounds sort of interesting in a mantis-y kind of way,” I thought).

In fact, the only thing “women’s” sites and magazines make me feel regularly is the distinct impression that I’m not in their demographic.  Even though I’m a woman.  Not coincidentally, this is frequently how I feel whenever a game advertisement or comic book cover assumes that I am male.  Even though I am a gamer/reader.

Ideally, The Mary Sue will become an exception to the above comic: a women’s site for women who don’t feel accepted in the mainstream’s idea of what women want (obligatory).

If you’re wondering why we called the site The Mary Sue, you can find out here.