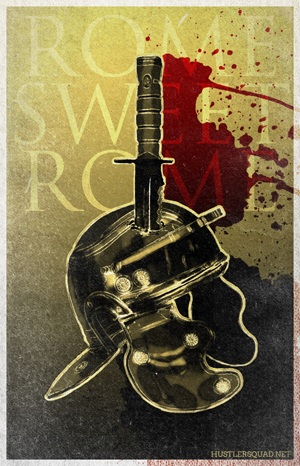 Last week we told you the story of an Iowan encyclopedia writer whose epic Reddit comment might just get turned into a big budget movie, after the concept behind the script he is developing with Madhouse Entertainment was picked up, before it has even been finished, by Warner Bros., who also claimed to have acquired the exclusive rights to the concept. Specifically, James Erwin’s story of whether a US Marine battalion could overthrow the Roman Empire if unexpectedly transported there during the rule of Caesar Augustus, Rome Sweet Rome.

But The Hollywood Reporter raises an interesting question: is it legally possible for Warner Bros. to nab the rights in the first place? Naturally, this question involves talking about Reddit’s terms of service.

you agree that by posting messages, uploading files, inputting data, or engaging in any other form of communication with or through the Website, you grant us a royalty-free, perpetual, non-exclusive, unrestricted, worldwide license to use, reproduce, modify, adapt, translate, enhance, transmit, distribute, publicly perform, display, or sublicense any such communication in any medium (now in existence or hereinafter developed) and for any purpose, including commercial purposes, and to authorize others to do so.

Certainly seems like the rights to the story might actually belong to Reddit and it’s parent company Condé Nast. Most sites out there that function mostly or entirely on user submitted content have clauses like this, that in the hands of a lawyer could be used to claim the use of anything uploaded, but are also used to secure the service’s right to push itself and its content across future platforms, operating systems, and browsers.

It’s also fair to say that a lot of sites don’t want to be held accountable for their user generated content, as four Google employees arrested in Italy in relation to a person they didn’t know uploading a video they’d never seen of bullying teens to YouTube can tell you.

Obviously, Erwin will write a screenplay and get copyright protection over that, but the question remains whether others are free to take the outlines of his story and adapt it.

Presented with Reddit’s user agreement, a Warner Bros. spokesman declined to get into any legal analysis except to say it “has obtained exclusive rights to Rome, Sweet Rome.”

The odds of Reddit itself going up against Erwin or Warner Bros. is slim to none: a service that depends on the goodwill of its many users, particularly one that received a huge bump in users when the last great social news service to go belly up went belly up, is unlikely to risk the flamewar that would result if they acted aggressively on the idea that every word published on their site was wholly theirs. But THR deftly points out that this very fact may mean that other studios may be able to use the concept, which frankly, sounds like a much more entertaining fight to me.

But still not as entertaining as Rome Sweet Rome itself. You can read the whole, very interesting, article here. For more on Rome Sweet Rome, see our article.

I believe one of the reasons for [the clause] is that we couldn’t technically host your comments as you could sue reddit for infringement if some type of usage agreement wasn’t in place. I am not a lawyer, but I’ll ping the lawyers to check.

We’re actually in the process of revamping the user-agreement, as it contains several clauses which aren’t really relevant to us…

Also it would be completely against our interests to sabotage something awesome created by a Redditor. I assured the author of RSR as much back when this whole thing started.