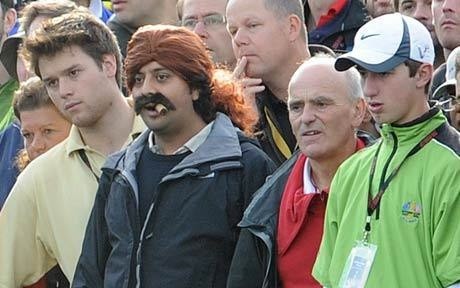 Tiger Woods Cigar Guy‘s true identity has been revealed: No, he’s not Sacha Baron Cohen. The Daily Mail, whose remarkable photo of Tiger Woods’ golf ball milliseconds before it smashed into a photographer’s camera at the Ryder Cup last week made a mustached, cigar-chomping guy a worldwide star, did some admirable sleuthwork and tracked the man down: His name is Rupesh Shingadia, and he is a 30-year-old investment analyst in London.

Shingadia, who is familiar with his viral online fame and says that “never in a million years could I have expected anything like this,” explains his costume to the Daily Mail:

Rupesh said his costume was a ‘tribute’ to Spanish gol fer Miguel Angel Jimenez. ‘I wanted to do something to show my support for the European team and I thought of Miguel. These days sportsmen have become devoid of character. But Miguel does his own thing and I love the way he walks around the course with a cigar clamped between his teeth.’

He ordered the wig and moustache from a website for £15 and bought a £14 Montecristo cigar from a tobacconist.

‘If I look goggle-eyed it was because I was stunned at the way he messed up.’

In case you were wondering, Shingadia’s favorite of the many, many Photoshops he has inspired is this picture of him with the Simpsons (h/t Out of Bounds): 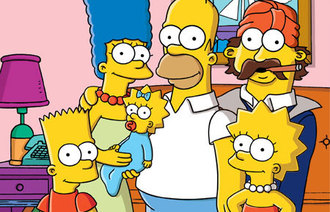