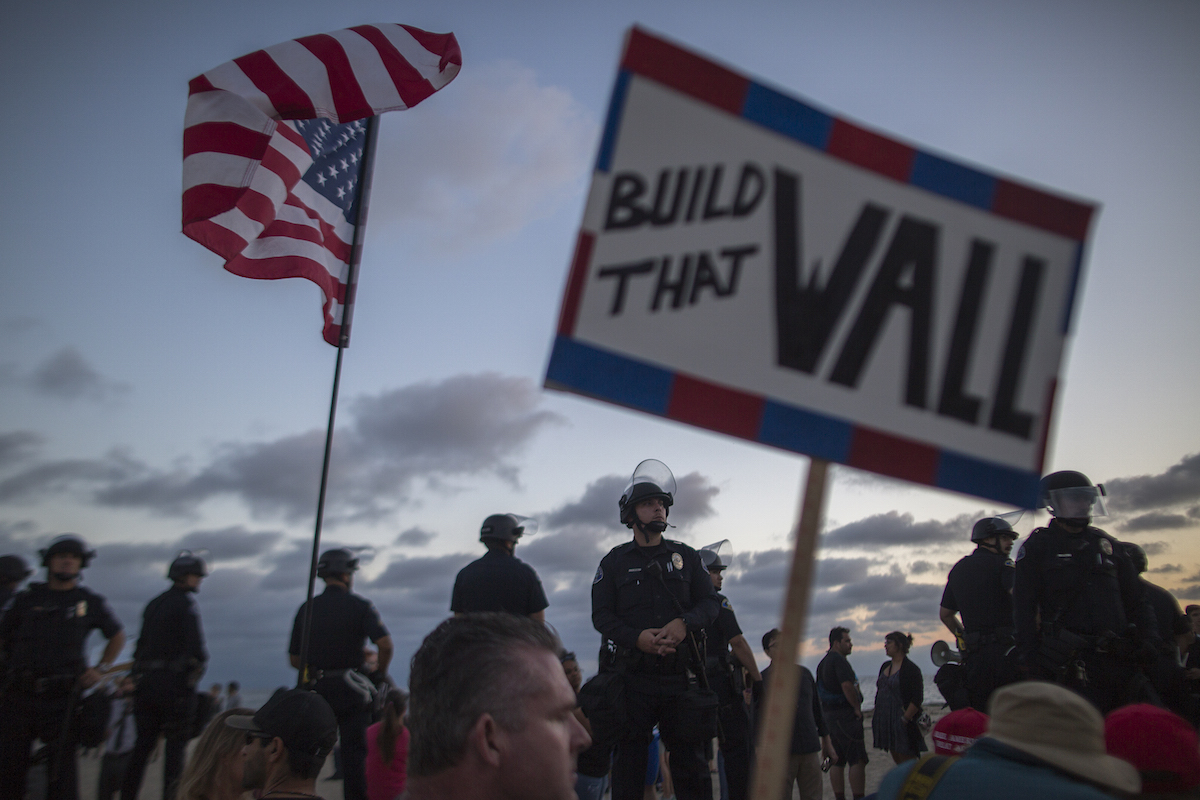 Given how strongly so many people feel about maintaining “strong borders,” you would think that when they encounter strong borders and get a chance to see immigration laws in action, they’d be thrilled. Or, at the very least, respectful. But no, that doesn’t seem to be the case with a recent wave of white racist and xenophobic public figures who are being denied entry to other countries. Because in their eyes, the separation of Hispanic families = valid immigration laws. But entitled white folk being turned away at a border = CENSORSHIP!

First, there was Richard Spencer, best known as that Nazi who got punched that one time. As you’d expect, Spencer is a big fan of Chief White House Racist Stephen Miller and the anti-immigration policies he’s crafted for Donald Trump. He’s a white nationalist who wants to end all immigration to the U.S., not just illegal immigration. (Well, all immigration by black and brown people, that is. He’s said he’s totally fine with “European immigration.”)

Anyway, a few years ago, Spencer was arrested in Hungary after organizing and attending a white supremacist gathering that had been prohibited by the government. He was banned from entering all 26 European countries of the Schegen area–states where you don’t need a passport or other documents to travel, designed to promote free and easy travel within Europe. That ban was supposed last three years, but in November, he was arrested again and banned for another five. At the time, he mourned his lack of ability to travel where he wanted whenever he wanted by 100% unironically telling the AP, “I’m being treated like a criminal by the Polish government. It’s just insane. I haven’t done anything. What are they accusing me of?”

Now Spencer is once again having trouble with the exact sort of border control he so supports. On his way to Sweden where he was meant to be a “secret guest” at a white supremacist rally, he had a layover in Poland, where Polish authorities said no thank you, and instructed him to return to the United States. It doesn’t look like Spencer has commented publicly yet, but his fellow Nazi friend Christoffer Dulney said of the incident, “The global anarcho-tyranny lives and thrives.”

Spencer isn’t the only one missing the irony of being super pissed at the idea of not being able to enter another country just because they feel like it. Racist Canadian YouTuber Lauren Southern has been planning a tour of New Zealand and Australia, where she and another white supremacist commentator were planning to charge people $80 a ticket (up to $750 for VIP) to hear them say their racist YouTube words in public.

But for someone who is so dedicated to the idea of closed borders (you probably best know Southern as that YouTuber whose boat had to be saved by a pro-refugee group while trying to stop boats full of refugees in the Mediterranean last year), Southern doesn’t seen to get why she couldn’t just show up in another country and start working when she felt like it.

According to an email from the Australian Visa Bureau, her application for an Electronic Travel Authority was denied. An ETA doesn’t permit a visitor to work in the country.

The email reportedly came just hours before her flight was supposed to take off. I’m pretty sure anyone who’s had to deal with consulates and visa applications knows how unprepared (or entitled, I’m guessing entitled) you have to be to plan so little ahead that you’re ready to board a plane going halfway around the world without knowing your visa is in order.

Southern had already been banned from entering the UK because, as a spokesperson explained at the time, the country is permitted to deny entry to any person whose “presence in the UK is not conducive to the public good.” At the time, Southern complained about the UK government quashing her “freedom of speech.”

They just locked me out and said “au revoir”… Officially banned from UK for “racism”.. doing fine though, all the cool people are being banned anyway 😉

Need to gather my thoughts and call family. Interrogation story is pretty crazy though. Will tell it soon. pic.twitter.com/mARtkyZKFm

You’d think that the right’s hypocrisy would get old. But when anti-immigration white nationalists refuse to respect other country’s strong borders (or, just taking a look around today’s news, when Stephen Miller or Mitch McConnell get so hilariously upset over people making use of their First Amendment right to say whatever the fuck they want to government officials), it’s a great (if totally unnecessary) reminder that these people are as ridiculous as they are terrible.