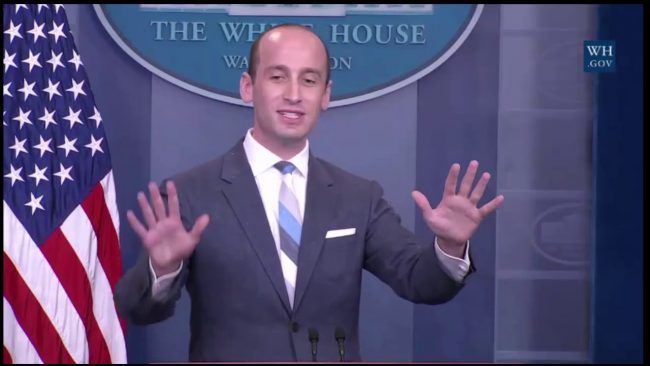 During yesterday’s White House press briefing, Trump’s senior policy advisor and living vampire underling Stephen Miller got into a strange argument with CNN’s Jim Acosta over the origins of the poem on the Statue of Liberty. The exchange is bizarre and painful to watch if you’re the kind of person who hates to watch grown men yell over each other, but the gist of it was that Miller came in to introduce Trump’s new plan to overhaul immigration. The proposal would institute a “merit” and skill-based system, and require prospective green card holders to speak English. It would also look at their salary, education level, and whether they can afford their own health care. The idea is to, over time, “cut net migration in half.”

Acosta asked Miller about the requirement to speak English, saying “It sounds like you are trying to engineer the racial and ethnic flow of people into this country.” Miller responded that Acosta’s presumption that this would favor immigration from English-speaking countries showed “cosmopolitan bias,” a coded term rooted in anti-Semitism.

Acosta also referenced the poem on the Statue of Liberty, asking if Miller and Trump were “trying to change what it means to be an immigrant coming into this country.” Miller’s pedantic, dismissive response was that the poem–you know the one, with the huddled masses yearning to breathe free–was essentially meaningless because it was added after the statue was erected.

ETA: Yup, that sounds about right:

How did Miller know Statue of Liberty poem was added later? Happens to be popular white nationalist talking point… https://t.co/K2hiTZCFUh

What Miller is ignoring is that, as historian John T. Cunningham wrote, (via CNN) the Statue of Liberty “was not conceived and sculpted as a symbol of immigration, but it quickly became so as immigrant ships passed under the torch and the shining face, heading toward Ellis Island. However, it was [Lazarus’s poem] that permanently stamped on Miss Liberty the role of unofficial greeter of incoming immigrants.”

The internet, as you might have guessed, had some thoughts.

Stephen Miller is what white nationalism looks like in 2017. It's not KKK rallies & hoods, it's well-spoken, educated bigots in suits.

Some people got a little more … personal.

Stephen Miller is basically Voldemort with a nose. pic.twitter.com/c86SWd9fOI

The only job Stephen Miller is fit for is opening the creaky castle door for people whose cars broke down in Transylvania.

Stephen Miller as Macaulay Culkin's character from The Good Son but on the day he was dressed up as Willy Loman for the school play.

Stephen Miller: What it looks like when "Well, actually" takes on human form.

Stephen Miller looks like if a kidnapping van were a person.

After watching Twitter drag Miller over both his statements and his general creepiness, I realized I didn’t know that much about him. And friends, I really should have left it that way. I should not have googled. I should not have Wikipedia’d. Because this man’s entire existence is so, so sad.

His entire Wikipedia entry is really short (he’s only 31, after all), yet every line in it is more depressing than the one before it.

To start, I cannot even imagine how his liberal, Jewish parents in Santa Monica, California must feel when they read their son shares and “ideological kinship” and a “long collaboration” with Steve Bannon.

Stephen Miller is the worst kid you grew up with, the most annoying boy in your neighborhood, who heard his unle or someone once say something racist and then never stopped parodying it back to everyone he met. He turned conservative at the age of 12 when he read Guns, Crime, and Freedom, a dated, racist, argumentatively anecdotal book about how democrats basically use the Constitution as toilet paper, written by the CEO of the NRA.

He clearly enjoyed being “politically incorrect” (read: being a trolling little racist shitweasel). He would allegedly tell Latino students at his high school to speak English. He also reportedly called a friend the summer before starting high school to defriend him, giving the boy a play-by-play of all the reasons the friendship was ending, including his “Latin heritage.”) After 9/11, he wrote to a local paper, saying that because of his school’s “pacifist” response, “Osama Bin Laden would feel very welcome at Santa Monica High School.”

Also, his yearbook quote stated “There can be no fifty-fifty Americanism in this country. There is room here for only 100 percent Americanism, only for those who are American and nothing else.” -Theodore Roosevelt.

Moving on to college! At Duke University, he may or may not have been friends with punchable Nazi Richard Spencer. It’s been stated and later disputed. He had a column in the university newspaper called “Miller Time” (gag). Yes, his columns are still archived, and no, you shouldn’t put yourself through that. Here are just a few headlines:

–“Hollywood and the culture war”

–“The case for Christmas”

–“Attack of the secularist Scrooges”

After college, Miller worked as press secretary for Tea Party members Michelle Bachmann and John Shandegg. He then worked as communications director for then-Senator and permanent racist house elf Jeff Sessions. While there, he helped Sessions kill the bipartisan immigration reform bill that would have provided undocumented immigrants with a path to citizenship. Trump’s new super restrictive, super racist immigration plan is what Miller’s entire life has been leading to.

Most of us probably knew someone like Miller growing up–as kids, in high school, in college. And we hope he’ll grow out of whatever asshole phase he seems to be in. But Miller never did. The way he condescended to Jim Acosta sounds like the snide, argumentative tone of a 12-year-old kid who thinks he’s the smartest person in every room. Duke’s former Vice President has said that Miller “seemed to assume that if you were in disagreement with him, there was something malevolent or stupid about your thinking—incredibly intolerant.”

What kind of person doesn’t evolve their views after the age of 12? Well, the kind of person that would fit right in with the rest of Trump’s cabinet, I suppose. There’s a fantastic profile in Vanity Fair with anecdotes from people who knew Miller at various points in his life. This past February, 3,500 Duke Alumni signed an open letter attempting to distance the school’s reputation from his own. They called him, among other things, “really icky” and “very creepy,” especially in the way he would interact with female students.

A high school classmate, Silverman, had some of the most damning stories, saying that in class debates, Miller’s tactic would be to bully his opponent “with unverifiable statistics and figures, baseless claims launched with his articulate bravado. He would just bludgeon you with evidence he pulled from thin air, gun-death numbers or immigration statistics that were usually false or gross exaggerations. And in 2002 no one had a smartphone to quickly verify it. It was mostly met with eye-rolls or an unwillingness to continue to debate someone who had a casual relationship with truth . . . . I know this may come off as melodramatic, but Stephen’s views are very DANGEROUS. Do not take these anecdotes or stories about him lightly. They sound like exaggerations and embellishments. They are not. He is an extremist. He has been radicalized.”

That was him then, and he clearly hasn’t changed at all since adolescence.

“Take him seriously and know that he is a dangerous person,” Silverman goes on. “He has a dangerous mind and a dangerous way of thinking. He wants to shift what America is about . . . . You’ve got to stay vigilant. He’s not taking days off. If there’s one thing Miller is, and he’s a lot of things, he’s absolutely motivated. This is his entire life. This is everything for him. He’s not going to rest. He won’t rest. He won’t stop . . . . He’s not a Trump shill. He was this way before Trump, before Bannon. He was radicalized way before that.”