What’s with All the Cartoon Character Profile Pictures on Facebook? 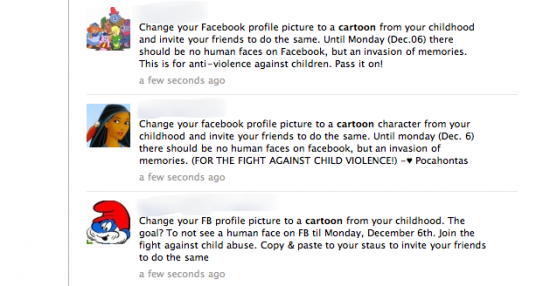 If you’ve been on Facebook lately, you may have noticed a recent wave of cartoon characters among your friends and acquaintances’ profile pictures. And it’s not just you. On Google Trends, Google’s snapshot-of-the-web service which charts hot search topics, nineteen out of twenty (!) of the top searches are for various types of childhood cartoon character, many narrowed down by decade (“80s cartoons”; “cartoons from the 90s”) or specific shows (who knew Bobby’s World was so popular?).

What’s this all about? According to many of the messages, it’s part of a campaign against child abuse.

Change your fb profile picture to a cartoon from your childhood. The goal? To not see a human face on fb till Monday, December 6th. Join the fight against child abuse & copy & paste to your status.

This campaign seems to have evolved from a campaign in Greece and Cyprus which didn’t have any such social awareness goal in mind. According to Know Your Meme, the origins of so-called Cartoon Profile Picture Week came from a Greek message “Aπό 16 έως 20 Νοέμβρη ας αλλάξουμε όλοι τις φωτογραφίες των προφίλ μας, αντικαθιστώντας τις με κάποια φωτογραφία ήρωα των παιδικών μας χρόνων. Σκοπός αυτού του παιχνιδιού είναι να μην υπάρχει ανθρώπινη φωτογραφία για λίγες μέρες στο Facebook,” or “From the 16th to the 20th of November, we shall change our profile pictures to our favourite cartoon characters. The purpose of this game is to remove all photos of human for a few days from Facebook.”

By the end of that time period, on November 19th, AllFacebook’s Nick O’Neill reported that the cartoon profile pic swap had made its ways to English-speaking users’ accounts — this time, the time horizon was from November 12th to November 30th. Still, it was phrased as a “game” — “NewGame: Change your profile picture to your favorite cartoon from when you were a kid. The goal of this game is not to see a human picture on Facebook, but an invasion of childhood memories until Monday. PLAY AND PASS ALONG!”

But transforming into a thing of activism rather than just a diversion seems to have given the trend critical mass. It’s not clear where that turning point came: Some updates link the campaign to UNICEF’s Kids Against Violence Day, but there’s no official mention of the campaign by UNICEF.

As with the “I like it on ___” Facebook campaign for breast cancer awareness, not everyone believes that such campaigns really do much: One Redditor writes, “I’m a social worker in child welfare. I’m sorry, but this cartoon profile picture fad is stupidest thing I’ve heard of in quite awhile. You really want to prevent child abuse? Help out your friends and family that have kids and are stressed out, volunteer with a youth group, volunteer at a non-profit that works with families, become a foster parent, or develop an after school program. But don’t change your goddamn profile picture and think you’ve done anything to prevent child abuse. Thanks for nothing.” The top-voted comment in the thread describes the campaign as “slacktivism” — “It makes the people involved feel better about themselves and allows them to feel like something is being done about the problem without them actually doing anything.”

But this seems to have been a genuinely viral, grassroots phenomenon, evolving from Greek-language game to English-language game to cyber-activism, slack- or not, and I don’t see it going away anytime until at least December 6th — possibly later, if it evolves again.

Update, 12/6: A disturbing — and false — rumor is spreading that the campaign was started by pedophile groups to get their friend requests accepted faster. “ATTENTION! JUST HEARD THIS on 60MINUTES: if you have a cartoon character set as your default, please romove it. This “support to stop Child Abuse” is a scam. The idea was started by a group of pedophiles to get children to accept their friend requests faster. It was just on TV and will be on the news tonight! Please post this as your status to spread the word and warn others!”

As documented above, this is not the case, but the rumor has spread as the campaign has gotten bigger.