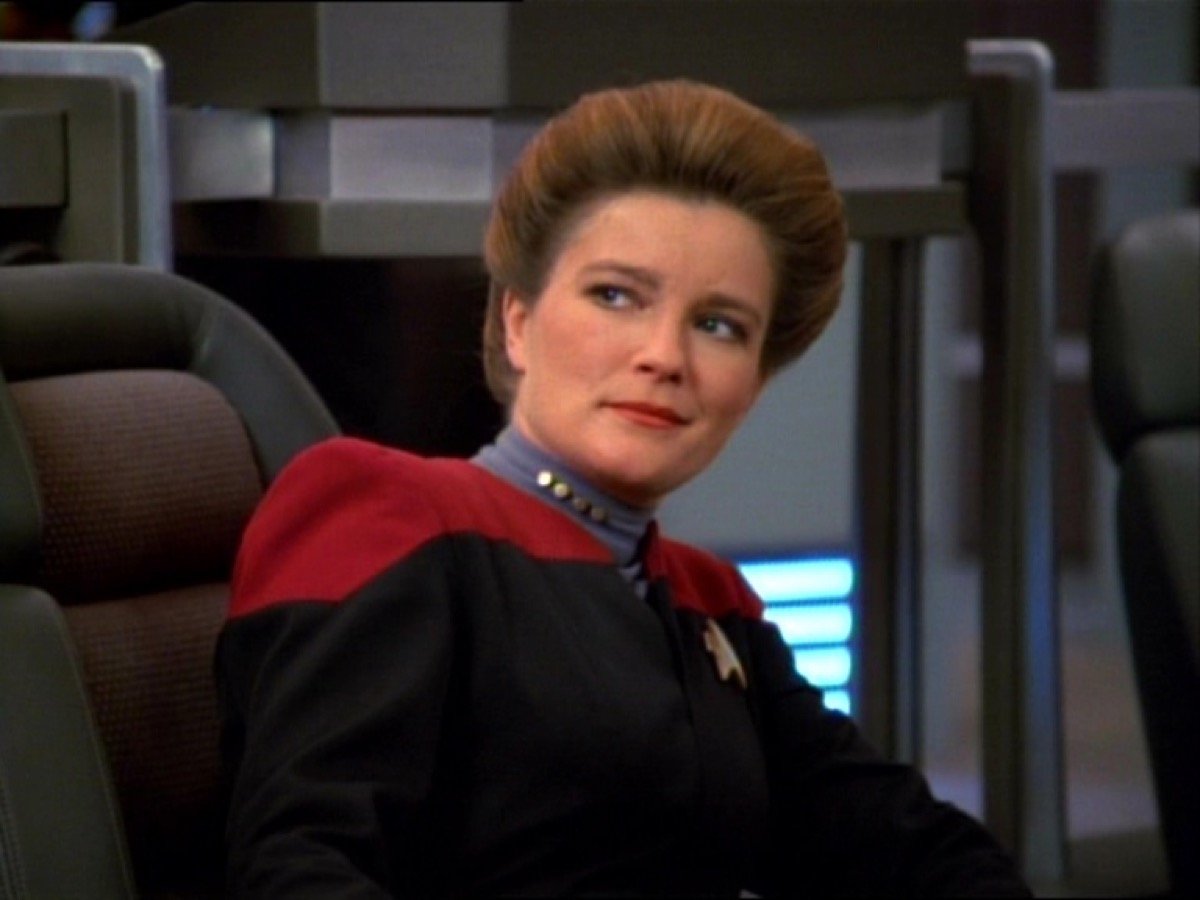 The first female captain in Star Trek, Kathryn Janeway made history with her first appearance in the premiere of Star Trek: Voyager and went on to win fans over with her sharp wit, cool head, and fondness for coffee. However, other than being an extremely capable captain and a caffeine addict, Janeway was also responsible for overseeing the safety and wellbeing of the entirety of Voyager when the ship became stranded in the Delta Quadrant.

Under Janeway’s guidance, Voyager was able to successfully complete what would have been a 70-year journey back to the Alpha Quadrant in seven years. However, the journey was far from easy, and it was left up to Janeway to keep the morale of the crew high even when it seemed like they would never successfully reach their destination. One of the many devastating personal incidents that Janeway had to endure was receiving a letter from her ex-fiancé from Earth, who, believing her to be dead, had remarried in her absence.

Such news would be heartbreaking for anyone to receive, but instead of wallowing in self-pity, Janeway managed to turn it into a positive. She realized that she couldn’t let her past life define her, and set all her ambitions on soldiering on and finding a way home.

Over the course of Voyager, Janeway consistently demonstrated that she would return to the Alpha Quadrant no matter the cost, and this persistence inspired the same attitude in many of her crew members. She also successfully helped to rehabilitate Seven of Nine after she was separated from the Borg collective, further demonstrating her ability as a capable leader and communicator.

Though she may not have been as flashy as Kirk or as philosophical as Picard, Janeway’s belief in herself inspired the crew of Voyager (and viewers at home) to keep their heads high and always have faith in their goals. 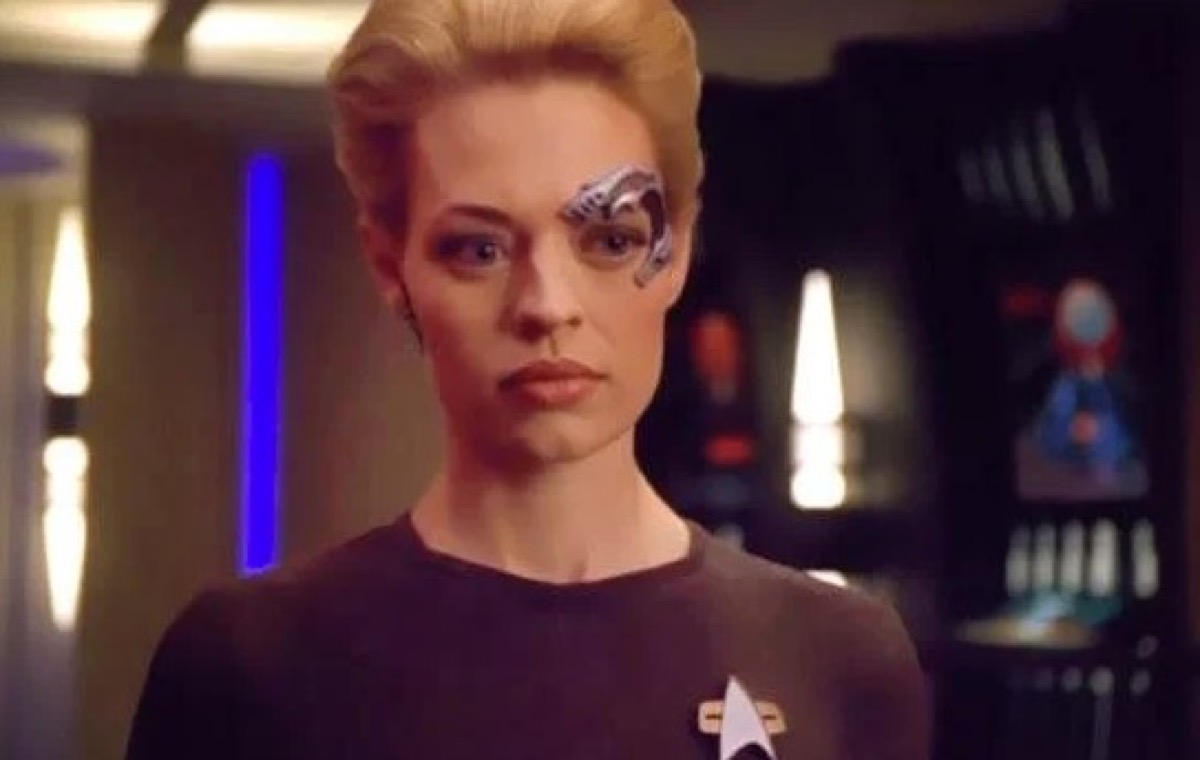 It’s never too late to grow and change.

A late addition to the cast of Voyager, Seven of Nine was a former Borg drone who became a human female after she was separated from the collective by Captain Janeway and the Voyager crew. After her forcible separation, Seven was left stranded on an unknown ship, surrounded by former enemies, and unable to contact the collective that she had relied on for the entirety of her borg existence.

Though, at first, she attempted to resist adopting more human mannerisms (and she displayed a deep dismay for having been made human by The Doctor), she eventually began to come to terms with her new life and started a quest to understand and (ahem) assimilate with human culture.

Seven’s journey was by no means an easy one—much of the Voyager crew distrusted her and were slow to accept her as a member of the crew, and even those who were willing to engage with her could never understand how she was truly feeling. However, Seven pushed through and eventually began to form genuine friendships and understand humanoid culture as she grew.

While she may have seemed like the last person who could ever be a sympathetic character when she was introduced, Seven’s struggle to fit in and understand her new life was an emotional journey to watch and helped illustrate how it’s never too late to start a new life for yourself. 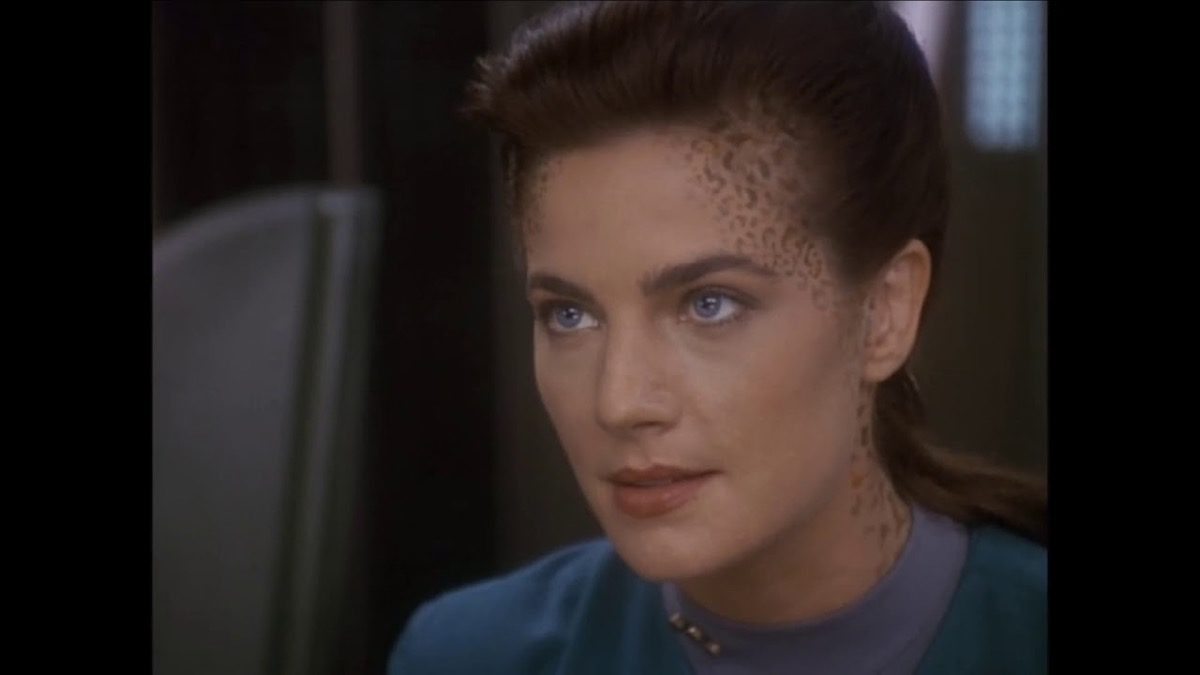 Never be ashamed for loving who you love.

The eighth host of the Dax symbiont, Jadzia was a science officer aboard Deep Space Nine and was notorious for her confidence, self-expression, and unwillingness to change for the sake of others. This also frequently translated into her love life, which broke down barriers across both race and gender.

In the DS9 episode “Rejoined,” Jadzia reconnects with Lenara Kahn, another joined Trill who was hosting the symbiont to which Dax was formerly married. Their relationship was taboo both in real life and in the narrative of the show—but for different reasons. Jadzia and Lenara shared the first lesbian kiss on a Star Trek show, and in-story, the two of them reconnecting was considered to be an extremely ostracizing act on their homeworld of Trill.

While that relationship didn’t last, Jadzia also had a much more successful relationship with Worf, who came from a drastically different cultural background than Dax. Although she struggled to adhere to Klingon customs and was briefly shunned by Worf’s mother, Jadzia’s love for Worf and unwillingness to bend to the will of others led to a long and happy marriage for the two of them until her untimely death. 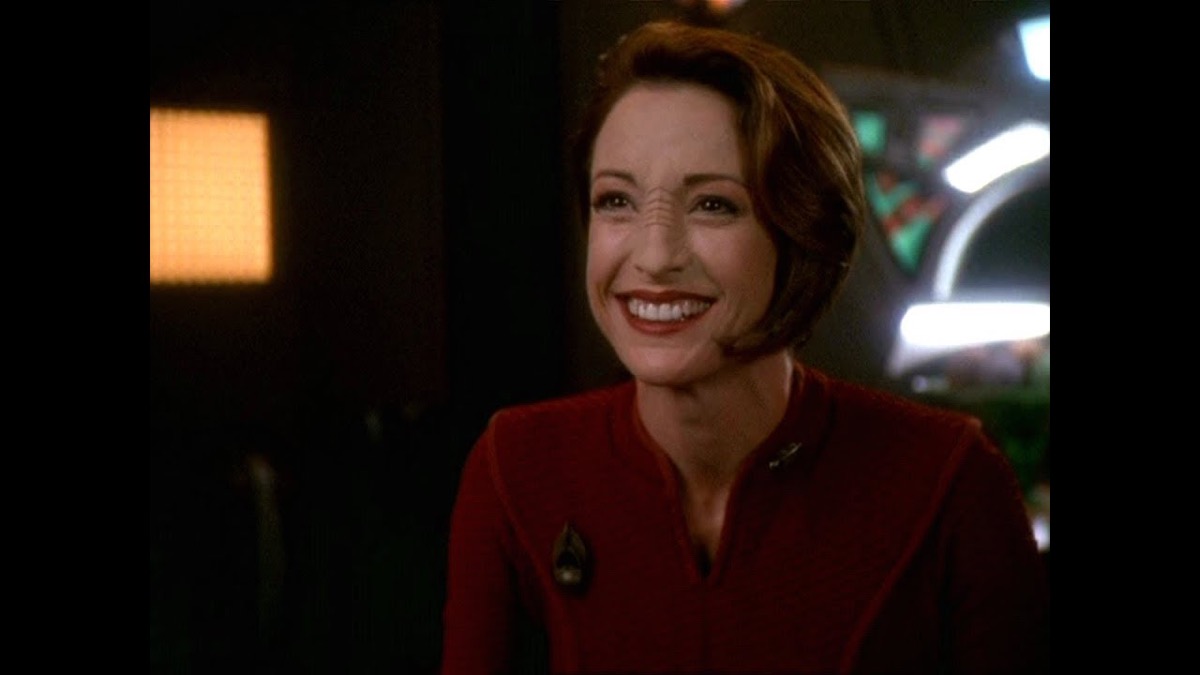 Fight for what you believe in.

A member of the Bajoran militia and eventually an officer on Deep Space Nine, Kira Nerys was a violent radical (considered a terrorist by some) who served as a key tactical player in the Bajoran revolt against their Cardassian oppressors.

During her time stationed on DS9, Kira was notorious for her short temper, rock-solid resolve, and a steadfast belief in the Bajoran people. Kira was also one of the few characters on a Star Trek show to have a deep and complex relationship with her religion. She was a devout believer in the prophets, and trusted their guidance in many important matters.

However, Kira’s early life was marked by a series of significant struggles due to the Cardassian invasion, and she learned from a young age how to look out for herself by building up a tough exterior. As a result, she butted heads with almost everyone on the station, as well as any foreign diplomats or officers who didn’t share her point of view.

Kira had little tolerance for being talked down to or underestimated, but her temper stemmed from a deep-seated understanding that, in order to survive, she had to be willing to fight for herself and her own beliefs. This proved especially difficult when she was forced to work with her former Cardassian oppressors like Gul Dukat and Garak, but she managed to do so by maintaining her composure and standing by her own morals and beliefs. 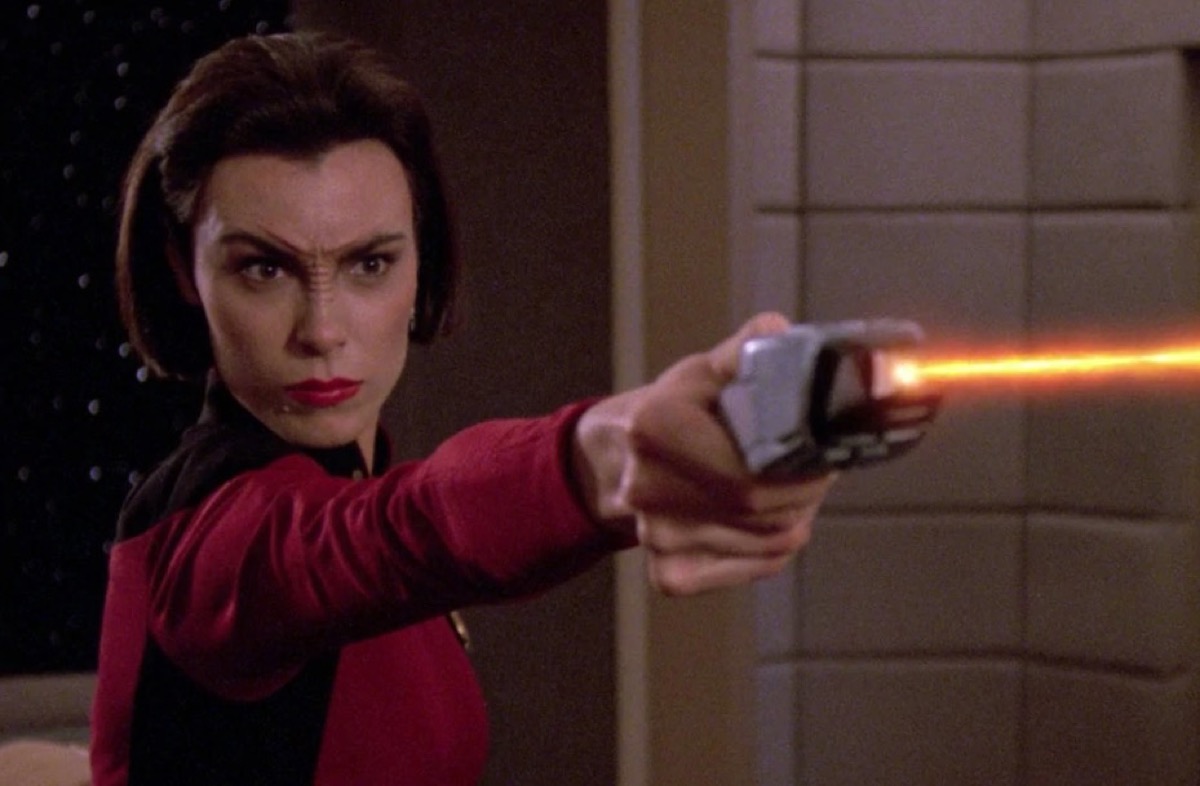 Have faith in yourself, even when others don’t.

Much like Major Kira, Ro Laren was a Bajoran officer with a chip on her shoulder. When she was first introduced in The Next Generation, she was treated poorly by Commander Riker and even Captain Picard, both of whom assumed the worst because Ro had been imprisoned after being court-martialed.

However, Ro defied the expectations of others when she was integral in helping the Enterprise-D on many missions, even when she was an unwanted crewmember. Ro also stood by her own set of personal beliefs, and although, as a child, she struggled with feelings of guilt and shame about her Bajoran heritage, she eventually embraced them with pride, wearing her traditional Bajoran earring even though it broke Starfleet uniform code, as well as refusing to format her name in the traditional First-Last way.

Over the course of her time on the Enterprise, she eventually endeared herself to the crew, and although she ended up becoming a member of the Maquis, she never doubted herself or her actions, even though many others were quick to do so. 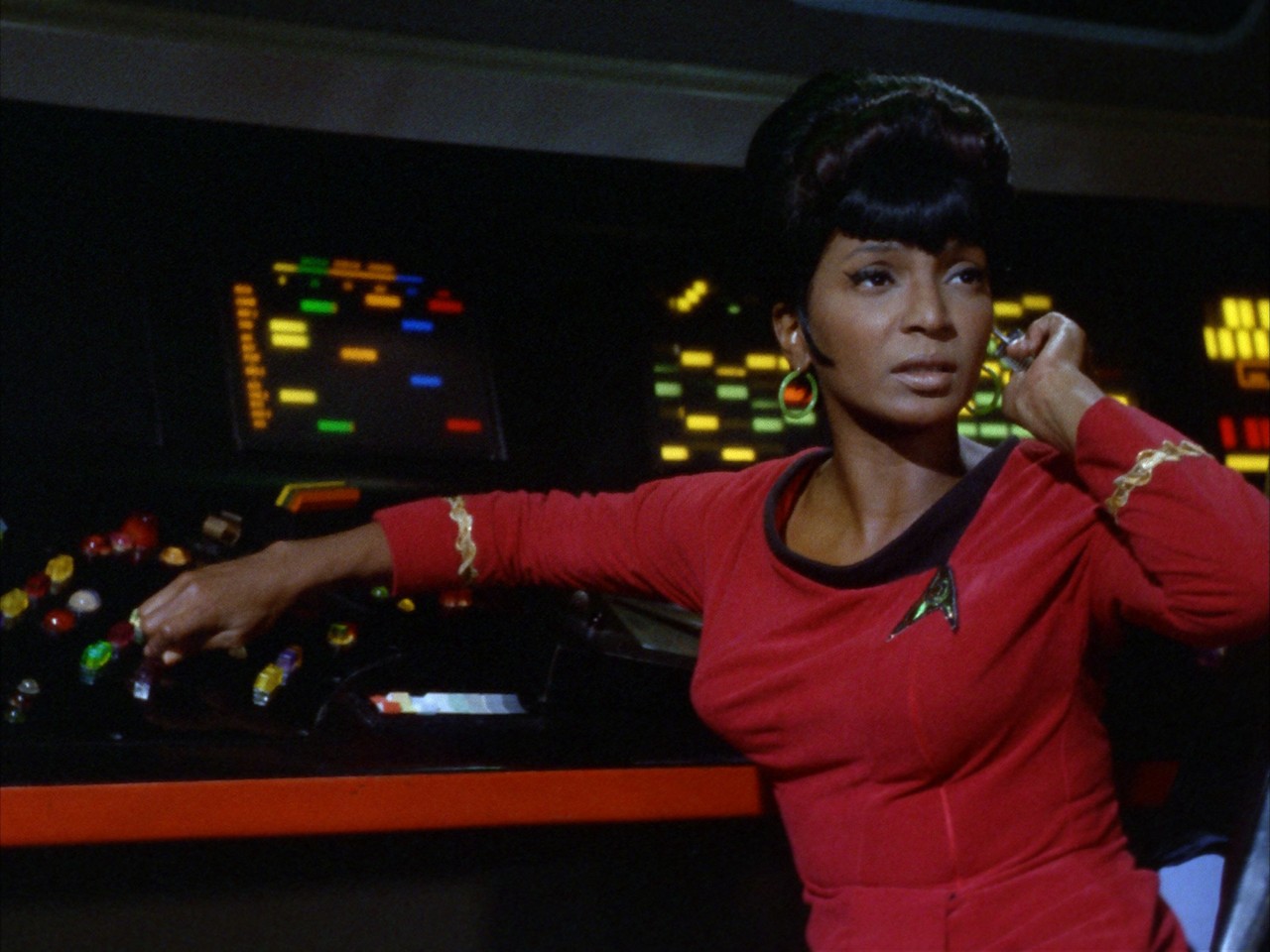 Don’t let anyone else tell you what you can and can’t do.

The original queen herself, Nyota Uhura was one of the most groundbreaking characters in television history. At the time of Star Trek’s premiere in 1966, Uhura was one of the few black women on television who was not only in STEM, but also in a position of authority in a world-class organization. A communications officer aboard the Enterprise, Uhura’s understanding of foreign languages and cultures helped Kirk out of more than a few close calls and made her an integral part of the original series.

As a member of the bridge crew, she served at helm, navigation, and science whenever the need arose, making her a jack of all trades. On a personal level, Uhura was a dedicated crew mate and friend to Kirk, McCoy, Sulu, and the rest of the enterprise crew, and never shrunk away from a challenge or succumbed to the pressure of being one of the few female bridge crew members.

Nichelle Nicols’s iconic performance as Uhura went on to inspire countless other Star Trek actors (including Whoopi Goldberg) and served as a symbol of progress in an era when seeing people of color on television was few and far between. Both Nicols and Uhura were confident, whip-smart women who broke boundaries and defined their own paths, cementing them in Star Trek history.