What If…? We Were Right About Killmonger Being a Vegeta Cosplaying Anime Fan? 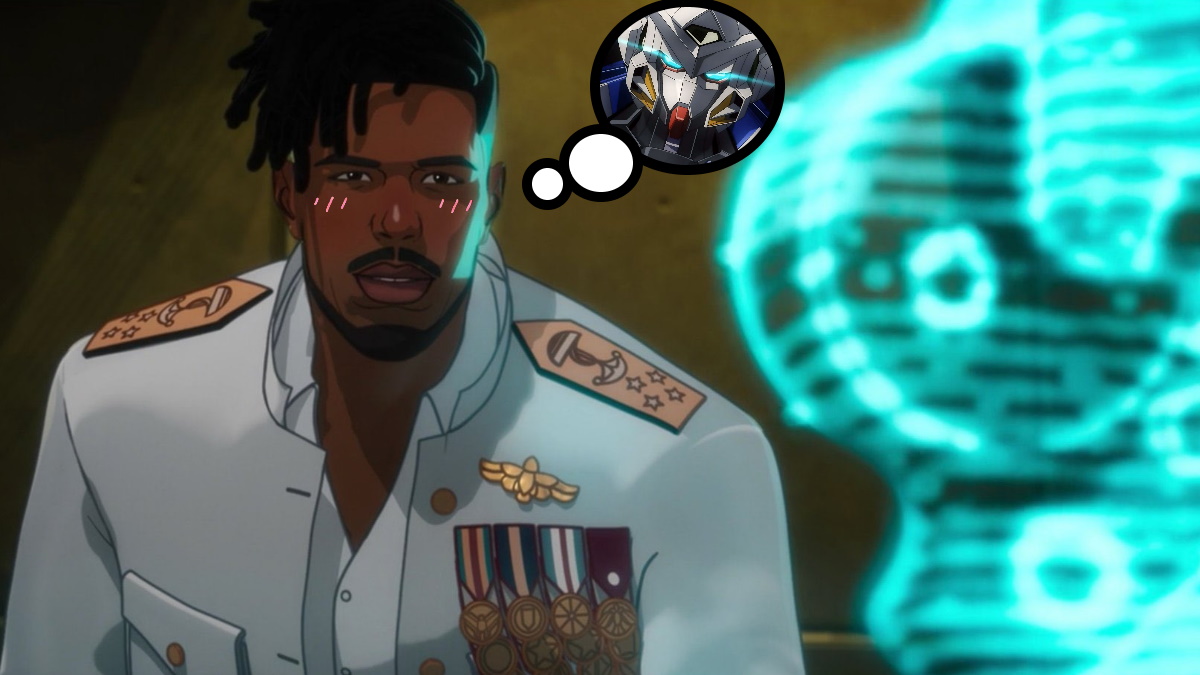 Spoilers for What If…? episode six

What If…? episode six can be summarized in the following gif.

When the previews to What If…? showed those few seconds of Erik Killmonger saving Tony Stark from his own weapons of mass destruction, I envisioned an entertaining romp where Erik, potentially, became the new Rhodey.

In hindsight, I’m not sure why it never occurred to me that Killmonger would end up screaming SIKE (or rather, Wakanda Forever?), but yeah, I initially thought we’d get the Killmonger version of that T’Challa Star-Lord episode.

That doesn’t mean we didn’t get any fun Erik and Tony moments. While Tony doesn’t ever become Ironman, he does still have all of the resources to make what he ends up calling a Gundam.

Why a Gundam, of all mech suits?

They made Killmonger a FUCKIN WEEB like Michael B Jordan lmaoo I love it #WhatIf pic.twitter.com/7LGTjJ3UYr

Not only does he like anime, he incorporated it into his thesis. I too know what it’s like to weave anime into your college courses—minus the whole “making actual armed and dangerous mobile suit” thing that Killmonger’s got going on.

This might feel like a random character detail, but if we take a trip back to 2018 we’ll discover two things: 1) The hype for Black Panther was truly a sight to behold, and 2) the Internet ran wild with Michael B. Jordan being an anime fan.

Michael B. Jordan reviewing Naruto manga chapters with emojis is the purest form of tweet in this world pic.twitter.com/X8aVlGeHZ4

Michael B. Jordan really be out here on that anime and manga shit pic.twitter.com/8jcwOWttUX

Jordan’s admission to loving anime dates back to 2011 via an old tweet where he’s wondering when the latest Naruto and Bleach manga chapters are gonna update. However, since he was getting a lot of press over Black Panther, the anime news resurfaced, so much so that folks started to link his Killmonger costume to Vegeta’s, aka, one of the best characters in the entirety of DBZ.

This, of course, led to all kinds of wonderful hot takes about anime fanboy, Erik Killmonger.

THESE TWEETS ARE GODSEND

Later, Jordan came out to share his love for the costume comparison between the two characters and the memes that followed. “I can’t remember if me and Ryan [Coogler, director of Black Panther] talked about it. I’m not sure if that was intentional. I thought it was dope — even a happy coincidence. I thought it was fly that people saw that and actually turned it into [memes].”

Over the years, Michael B. Jordan has turned his anime love into a fashion line and is even part of the anime series gen:LOCK, so the anime love is still going strong.

That being said, I don’t think anyone expected for those “Michael B. likes anime, therefore, Killmonger likes anime” memes to show up in that What If…? episode.

I’d like to imagine that tweet I made three years ago still holds true. Shuri would definitely judge Killmonger’s anime tastes, especially since the episode ends with the two of them on opposite sides.