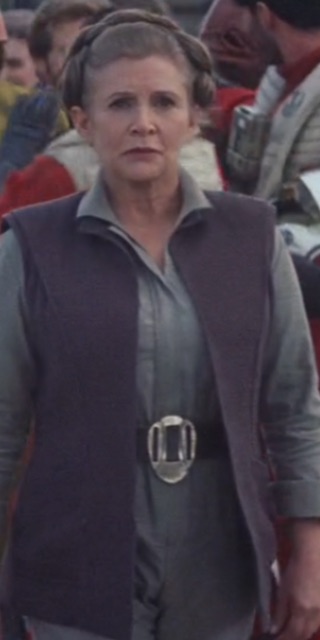 It’s a difficult thing to think about, but as we know Carrie Fisher’s General Leia Organa has a larger role in Episode VIII than she did in The Force Awakens, and her story was planned to continue after that into Episode IX. Now that the beloved Fisher has passed away, the Star Wars team at Lucasfilm and Disney are trying to put the pieces back together and figure out what to do next.

As reported by The Hollywood Reporter, “at least two key scenes are planned for Episode VIII (Dec. 15) and Episode IX (2019): a Leia reunion with Luke Skywalker (Mark Hamill) and a confrontation with Kylo Ren (Adam Driver), her son who killed Harrison Ford’s Han Solo in 2015’s The Force Awakens.”

While Rian Johnson’s Episode VIII finished filming back in July, THR’s sources say that Leia was supposed to have an even larger role in Episode IX, so now there’s a matter of figuring out what route they’d like her story to take now that she’s not here to continue Leia’s journey.

Episode IX‘s director, Colin Trevorrow, is due to arrive in Los Angeles next week to discuss options with Kathleen Kennedy and the rest of the team at Lucasfilm. There’s no word on how far along his and Derek Connolly’s script for Episode IX is, but as the film’s not due for release until 2019, they have some time to reorganize the story and do it right.

Of course, all this is happening as Team Star Wars is still mourning Fisher’s loss. As one THR source says, “People are still deeply mourning Carrie’s death over there.”

Michael Fink, an Oscar-winning VFX supervisor, was asked about the possibility of having Leia continue her story in a similar way to Peter Cushing’s Grand Moff Tarkin, who was able to be resurrected thanks to CGI (as was Young Leia). He says, “I have no doubt, given some of the recent work I’ve seen, there are filmmakers who will be willing to take up the challenge. [But] so far, we have seen moments of success but not full performances.”  There’s also the ethics of the matter, and the fact that Peter Cushing passed away over twenty years ago, whereas Fisher’s passing will still be fresh. Fink’s response: “Should we create additional roles for Princess Leia? I don’t think so.”

AGREED. Here’s to the team behind Star Wars giving both Carrie Fisher and General Leia Organa the treatment and closure they deserve.