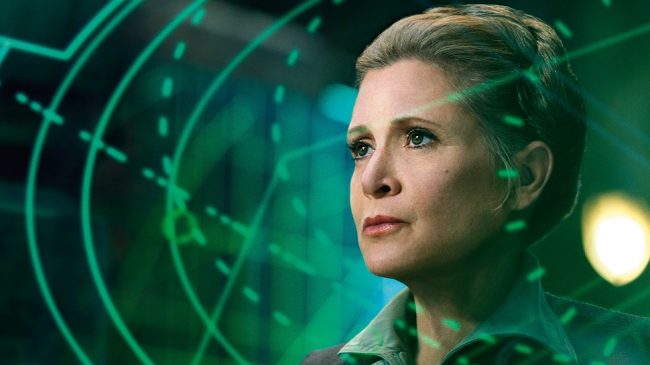 Star Wars: Episode VIII already wrapped last July, and it’s still slated to come out in 2017. At this point, however, the experience of watching the film will be a lot more surreal than expected, given that Carrie Fisher has just passed away, and also given the reports that her character has a larger role in the upcoming film than she did in Star Wars: The Force Awakens.

Spoilers for The Force Awakens to follow. Consider yourself forewarned.

We already loved her role as General Organa in The Force Awakens, and given the events of that film, it makes perfect sense that her character would continue to play a key part in the events of the future movies. One of the most significant plot points in the movie revolves around her relationship with her now-estranged husband, Han Solo, and their son, Kylo Ren, who turned to the Dark side. The climax involves their son turning on his own father and killing him.

It seems likely, then, that the next movie will revolve around the consequences of that shocking murder, particularly for those most betrayed by it: General Organa and Luke Skywalker. Many fans have speculated that the rest of the movies will revolve around Kylo Ren’s redemption, just as the original movies led to a redemption of sorts for Darth Vader. It’s hard to imagine how a story like that could happen without Carrie Fisher, however.

In any case, according to Deadline, General Organa will have “a larger role” in Episode VIII, which is meant to come out on December 15, 2017. Since she already had a prominent role in The Force Awakens, it’s interesting to learn that her role in this upcoming movie will apparently be even more important. Deadline also reports that her character was originally intended to appear in Episode IX, as well, but that movie had not yet begun shooting and won’t begin filming scenes until next year.

Given that Carrie Fisher will no longer be able to appear in the final movie of the trio, it seems likely that Episode IX will undergo some rewrites and possible delays before shooting. Although previous Star Wars movies have featured CGI versions of actors who have passed away, I personally hope that they don’t go in that direction with Carrie Fisher, particularly so soon after her passing.

To be honest, though, I have absolutely no idea how I would handle this if I were on the writing staff at Disney and Lucasfilm. I’m sure the entire cast and creative team for the movies is in mourning for their colleague, and the idea of continuing to tell the story as planned must feel very difficult for them, based on how beloved Carrie Fisher seems to be by everyone who has worked with her and knows her.

I wish the creative team the best of luck in approaching Episode IX next year. In the meantime, I fully expect to cry throughout watching Episode VIII, even if it’s not sad at all, because … well, it’s just going to be hard.

(via Deadline, image via Disney/Lucasfilm)