What Happened on Supernatural‘s Second To Last Episode, and What’s Left Now?

And why wasn't it gayer? 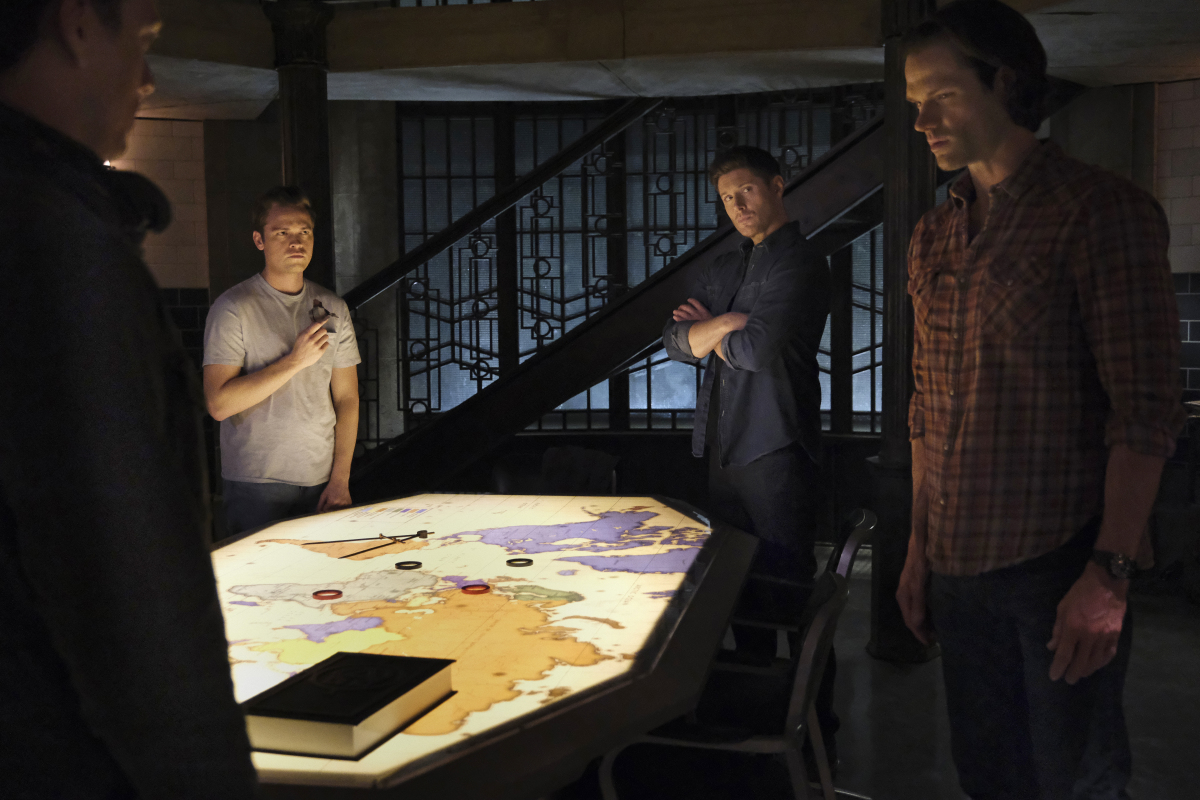 Spoiler Warning for the most recent episode of Supernatural.

A lot happened on Supernatural last night. Like … A LOT. If you weren’t plugged into things, I wouldn’t blame you for thinking this was the series finale. But no, there’s one episode left, even though last night the Winchesters and Jack beat God himself and became the authors of their own story at last.

The mechanics of defeating Chuck (Rob Benedict) were … very complicated. At the end of last week, Sam (Jared Padalecki), Dean (Jensen Ackles), and Jack (Alexander Calvert) had been left alone on an empty earth, thanks to Chuck poofing everyone in existence. Dean had been saved from Death herself (Lisa Berry) by Castiel (Misha Collins), who told Dean he loved him and summoned the Empty.

This left everyone very upset and sad and Sam and Dean offered to give Chuck the ending he wanted (them killing each other) if he just brought everyone back (including Castiel, Dean made quite clear). Yes it made my Destiel-shipping heart hurt.

But Chuck was too mad so he said no and left the boys to suffer. He even let Dean find an adorable dog and feel hopeful for a moment before making the dog disappear too! So mean! Hope seemed to arrive in the form of the Archangel Michael (Jake Abel) who was still hanging around. Michael could help read God’s Death book (stolen recently) and they could know the end of God’s story!

Except no, he couldn’t. And then the weirdest part of the episode happened. Lucifer (Mark Pellegrino) showed up, resuurected by God! He tricked Dean with Castiel’s voice on the phone, which was a gut punch to everyone, and then he offered a solution to the Death book issue. Since only death could read God’s book, he made a new death by killing a reaper and … then when she opened the book he double-crossed everyone and killed her, then Michael killed him and … it was all very pointless and I don’t know why it needed to happen.

But it got Sam, Dean, Jack to their final confrontation with God, because Michael ratted them out to daddy (he was mad that God asked Lucifer for help. Like I said this episode was packed and confusing). But Chuck still killed Michael because he does like his wrath and he decided to proceed to finish the story by beating Sam and Dean to death!

And that’s where the episode actually got good. In a final act of defiance, the Winchesters wouldn’t submit to God himself. And while he beat them up … Jack won the war. You see, when Jack exploded last week, he apparently became a sort of a black hole absorbing power and energy, and as God used his power on Sam and Dean, Jack sucked it all up and … became God.

It was a great twist and it came because the Winchesters realized there was no point in trying to read the end of the story. They could write God’s ending themselves and finally be in control. And the even better moment came when Chuck tried to write things himself one more time: he assumed the Winchesters would kill him, he called Dean the world’s greatest killer. Except for last week Castiel did that whole thing where he died telling Dean that he loved him because Dean isn’t a killer he’s the most loving person on earth and so … Dean and Sam knew that wasn’t who they were.

Dean left Chuck alive and powerless, to grow old and die and fade to nothing. Forgotten like all the humans he’d abandoned. It was poetic. And it left Jack as the new God, in harmony with the Darkness and present in every person and thing on earth. Jack’s final speech to the boys was really beautiful, and I love the idea of him as a new God. And I loved the final moments of the episode when the boys literally drove off into the sunset in a montage set to “Running on Empty” of all the faces we’ve known and loved in the show over the years. Cas and Jack’s names are carved into the table in the Bunker by Sam and Dean and it was a good ending …

Except it wasn’t the end! And it was very much missing something. Something with a trenchcoat and several years of unrequited love in his blue eyes. Now that the Winchesters get to write their story and now that Jack is in charge and brought everyone else in the world back … shouldn’t Jack have returned Cas to earth too? It was even shown in this episode that God could bring back an angel from the Empty so, why wasn’t Cas there?

Well, I’m hoping that it’s because that’s the final story Supernatural has to tell. The season finale is called “Carry On” and that’s of course a reference to the song that’s played in every season finale of the show, “Carry On Wayward Son.”

But it’s clear now that the title has a double meaning, as in it’s about how Sam and Dean will themselves “carry on without God writing their story and no imminent apocalypse to deal with. Who are they now? What do they want? And I just don’t see a way that story carries on for these guys without the other people in their life who love them and who they love (platonically or otherwise). So, I’m hoping we see something in the final episodes with Sam and Eileen (Shoshannah Stern) and I hope we get a final something with Dean and Cas.

Now, I could be setting myself up for disappointment hoping for this. Lord knows this show has disappointed me so many times. And if last week’s love confession hadn’t happened and hadn’t confirmed so much of what fans have been seeing and assuming the show was doing for years, I would be far warier here and far more pissed off. But I think there are too many Chekhov’s guns sitting unfired and for the last time, I have faith in the show that it will hit the target.

I just want the target to be a little bit gay. Please?