Humpback Whales Teach Hunting Techniques to One Another | The Mary Sue 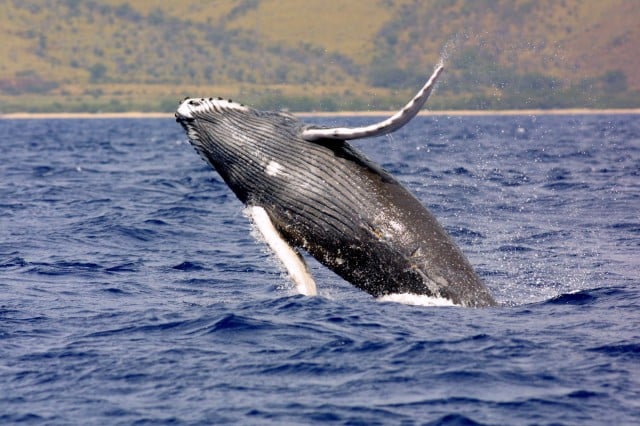 Think humans are special because we can show one another how to do things? Think again. According to a study published this week in the journal Science, humpback whales not only developed new ways to hunt different prey — they also shared that information with other whales, teaching one another new hunting techniques.

A team of researchers led by the University of St. Andrews has found that a hunting technique developed by a few whales after herring stocks were depleted in the 1980s has been picked up by others in the ensuing decades, and may now be used by as much as 40% of the humpback population worldwide. The technique, called lobtail feeding, sees the whales slap the surface of the water loudly with their tails before blowing one of the bubble nets they use to catch prey.

While lobtail feeding has been seen in other species, it was not demonstrated in humpbacks until 1980, when the practice soared in popularity among whales feeding on sand lance in the waters off of New England. Whales passing through these waters have apparently picked up the trick and passed it along themselves, suggesting the sort of learning through cultural transmission once thought to be relegated to primates. That the once novel technique has become so widespread among these whales, though, suggests that cetaceans like whales and dolphins may be more capable of learning new tricks from one another than we’ve given them credit for.

On the other hand, perhaps this shouldn’t be so surprising. Humpbacks learning from one another isn’t an entirely new phenomenon, as previous research has already shown that the whales can pick up new songs from one another. If they can pick up a tune, taking some handy pointers on how to catch a new breed of tiny fish can’t be that hard, right?