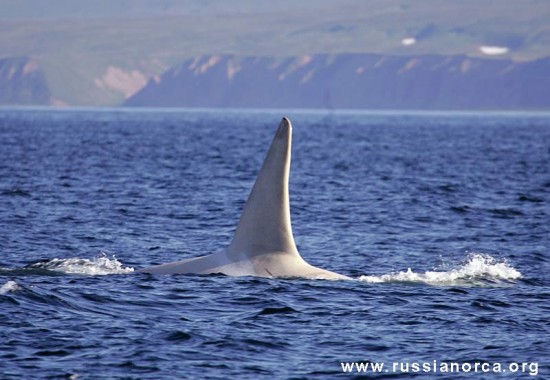 A team of Russian researchers have announced that they have spotted the first known adult male all-white killer whale off the Kamchatka Peninsula, near the Commander Islands. Named “Iceberg” by the researchers that made the discovery, the whale is one of a few all-white whales in the area, but the only known male to have reached maturity.

Identified by the Far East Russia Orca Project (FEROP), Iceberg’s mature status was estimated by his fully grown six-foot tall dorsal fin. According to researchers, he’s at least 16 years old. His family pod of 12 other whales is one of 61 that the group has spotted in the region, and he is one of three all-white whales the group has identified. The other whales, however, have yet to reach maturity.

Researchers are still uncertain as to why the whale is all-white, as opposed to the orca’s normal black and white coloring. While albinism is a likely cause, the researchers have yet to get a clear view of Iceberg’s eye, so it remains only a theory.

It’s worth noting that only a few white killer whales have ever been spotted, and only one ever lived in captivity. The captive whale, Chimo, was partially albino as a result of Chediak-Higashi syndrome. However, Chimo only lived two years in captivity, and died in 1972 as a result of complications stemming from the syndrome which brought about her albinism.

According to FEROP, they expect to see Iceberg’s pod again this summer and are planning to try and learn more about this unique whale. In the meantime, the group will continue their observation of the other local marine life, as well as their research into orca linguistics and the impact of oil and gas mining on the whales’ ability to communicate.

Their stated goal of furthering understanding and protection for the marine life of this region will surely be bolstered by Iceberg’s uniqueness. In a press release, FEROP co-director Erich Hoyt said:

“In many ways, Iceberg is a symbol of all that is pure, wild and extraordinarily exciting about what is out there in the ocean waiting to be discovered […] The challenge is to keep the ocean healthy so that such surprises are always possible.”

The video above shows some of the other white orcas FEROP spotted in the region between 2009 and 2010.

(Image and story via Russian Orca via BBC via Neatorama)