Westworld at PaleyFest 2017: Laughter Abounds As Cast and Creatives Discuss the Show’s Complexities

"Westworld is going to be part of the solution, not part of the problem." - Thandie Newton 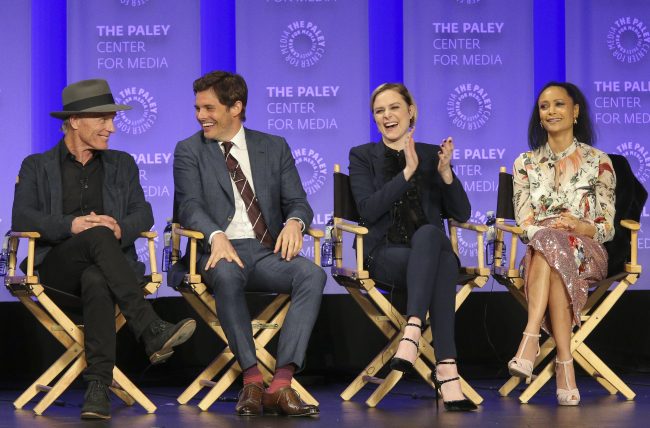 While the brilliant ladies and showrunners of Westworld were whisked off the red carpet almost as quickly as they had come, there was plenty of opportunity to hear what they had to say during PaleyFest’s Westworld panel, which ended up being one of the most delightful and funny evenings I’ve had in a long time. Surprising, given the near-complete seriousness of the show itself.

Before the panel came out, we were treated to a 90-second clip featuring Westworld bloopers. You haven’t lived until you’ve seen Dolores flipping the bird at Arnold’s voice, or alternately seeing a horse take a crap right next to her as the camera pulls back for a long, dramatic shot. I’d gotten used to thinking of the animals as hosts on the show, so I never really pondered the logistics of horses on set but, yeah, that was probably a regular occurrence!

Then the cast and Executive Producers came out for the panel, which was moderated by Entertainment Weekly’s Jeff Jensen and was an exercise in figuring out new and exciting ways to tell fans nothing. Co-creator Jonathan Nolan is a lockbox when it comes to Westworld secrets, whereas his Co-creator (and wife) Lisa Joy seems to be the kind of person who will spill all the secrets if you look at her the wrong way. (Wanna know Westworld secrets? Corner her in conversation at a party when she’s by herself. She’ll tell you everything.)

Meanwhile, the actors know absolutely nothing about what’s coming for Season Two, and they barely knew what was going on even as they were filming Season One! Despite the fact that Nolan and Joy developed the show as “one 10-hour movie” rather than 10 1-hour episodes, and had the story of the season written before they began filming (which is how they’re approaching S2, and why it’s going to take so long for more Westworld to arrive), they didn’t tell the actors anything ahead of time. So, the actors just had to trust the direction they were given in any one scene, even if they didn’t understand what the motivations for certain things were. 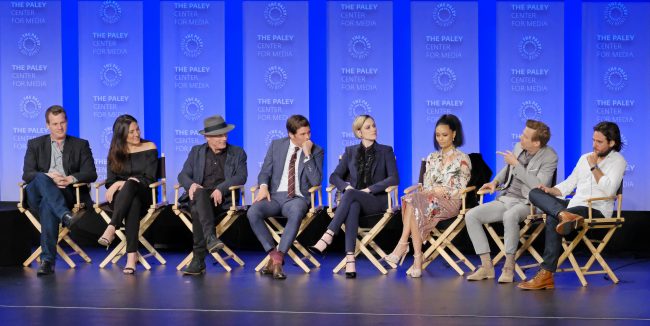 Image via Michael Bulbenko for the Paley Center

For example, Ed Harris and Jimmi Simpson had no idea that they were playing older/younger versions of each other until they got to filming the last couple of episodes, and it was only certain practical things that tipped Simpson off. Simpson told the story of how one day, one of the hair and make-up artists on the show came up to him and randomly asked him if he’d mind having his eyebrows re-shaped. It was only after his eyebrows were done that he started thinking about why they were doing that, and it occurred to him that they’re probably trying to get him to look like someone else. Suddenly, he thought, “Am I…am I Ed?”

He then started paying much more attention to Harris whenever he was playing The Man in Black. He also remembers passing Joy on set once this thought had occurred to him, and he asked her “Am I Ed?” and she immediately made an Oh my God, I got caught! face and ran away before she could give anything away. She says, “I felt bad, because I didn’t want him to feel insecure about his eyebrows!” To which Harris responded, “I’m just wondering what’s wrong with my eyebrows.”

Apparently, Evan Rachel Wood was the best of the cast in figuring out answers (or, at least getting the closest) to Westworld‘s myriad twists and turns, and the cast confirmed that she figured out she was Wyatt pretty early on. 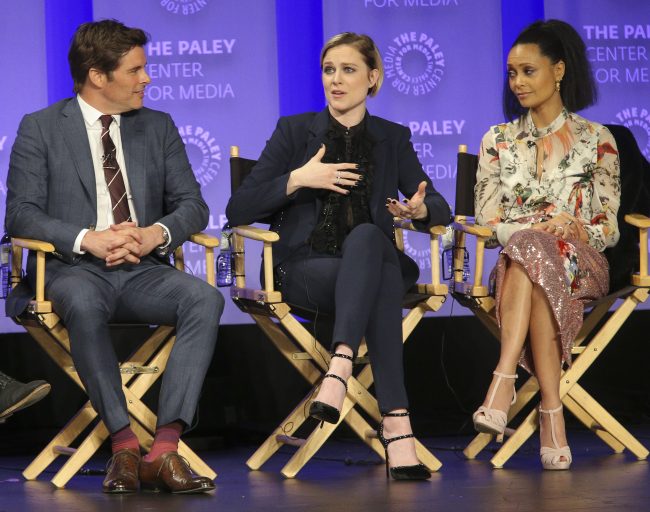 Wood got emotional when talking about how much the role of Dolores has meant to her, calling it by far the best role she’s ever played. And she loved that information was kept from them until last-minute, because “everything was so raw and fresh” as they played each scene. She said that her ability to play a naive host that knew nothing of the world was made easier, because “it helped that a lot of the time I didn’t know what was going on.”

Thandie Newton, however, made sure to emphasize that Wood’s performance was due more to her skill than to the logistics of how they received information from the showrunners, calling her Dolores “a tour-de-force performance” and gushing over the intricacies of Wood’s portrayal. Wood returned the favor, praising Newton’s Maeve, and each of them expressed the regret that they barely shared any scenes together and the hope that they would be able to do so more in Season Two. (BTW, I WANT THIS TOO, KTHXBYE!)

Newton went on to praise the show, particularly in the context of early criticism of the show that was wary of its depiction of violence against women. When Nolan and Joy first told Newton that she’d be playing a madam in this world, she thought, “do you know that I fight violence against women in my spare time?” She was skeptical, until they explained their vision for the show, which won her over right away.

“That was the point,” she explains, regarding the harsh depiction of the treatment of the female hosts in the beginning, followed by their self-emancipation by the end. “Look at where we are, and where we can go from here.” As she continued to film, she grew more and more confident that the show was far from demeaning, and that there’s a huge difference between depicting harsh realities, and exploiting them. She was thrilled that Nolan and Joy are the kinds of showrunners who expect their cast and crew to be as political in their work as they choose to be in the rest of their lives, and so Newton “was an activist every single day I went to work.”

“Westworld is going to be part of the solution,” she said, emphatically. “Not part of the problem.” 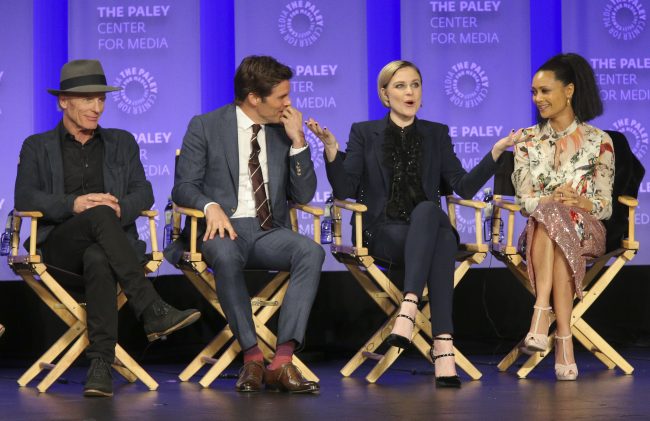 As is the case with all the PaleyFest 2017 panels, the full Westworld panel will be available on Hulu, a PaleyFest sponsor, in a few days. So, I’ll just share a couple more fun or interesting tidbits I thought you’d enjoy!

Here are more photos from the panel than you can shake a stick at!

Need to catch up on HBO’s Westworld? Remember that we’ve got some very thorough recaps going on here at TMS. Hopefully, reading those and chatting with fans in the comments will help us all get through the long wait for Season Two!