Steven Spielberg May Remake West Side Story | The Mary Sue

Play It Cool, Boy: West Side Story May Get a Steven Spielberg Remake

No one tell Office Krupke. 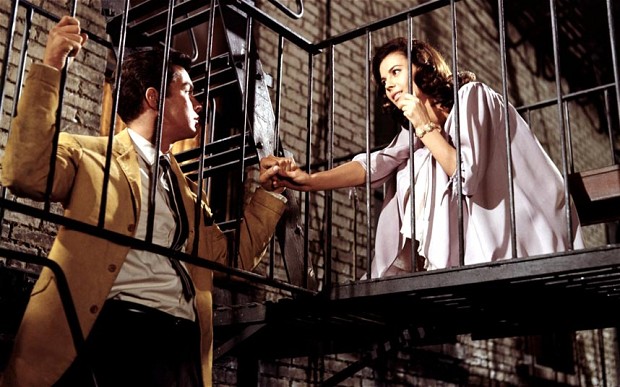 Of all the directors I expected to take on a new film adaptation of West Side Story, Steven Spielberg was not one of them. But when you’re a Jet, you’re a Jet, I guess!

According to a profile on Spielberg in The Hollywood Reporter, the director has dreamed of adapting West Side Story “for decades,” and has finally secured the rights after 15 years. The film would be a Fox/MGM production, and Angels in America playwright Tony Kushner is currently working on an adaptation of the script.

Inspired loosely by Shakespeare’s Romeo and Juliet, West Side Story is the tragic New York love story of Maria, a Puerto Rican girl, and Tony, a white boy being dragged down by his delinquent pals. Tony and Maria’s budding romance causes tension among local gangs The Sharks and The Jets, and, given the show’s source material, you can probably imagine what happens from there (never was there a tale of more woe, etc.).

The initial 1975 stage production of West Side Story featured a book by Arthur Laurents, music by Leonard Bernstein, and lyrics by Stephen Sondheim. The 1961 film adaptation went on to win ten Academy Awards, including Best Picture, and was hailed as “culturally significant” by the United States Library of Congress.

As iconic as the original production was, there will be definite room for improvement in Spielberg’s adaptation, specifically in terms of representation. In the 1961 version, Rita Moreno was the only Puerto Rican performer actually playing a Puerto Rican character in the film. The role of Maria was played by white actress Natalie Wood; Wood was also the only performer playing a Puerto Rican character in the movie not to wear dark make-up.

Despite the 1961 film’s considerable imperfections in terms of representation, it was still revolutionary in many ways. Ernesto Acevedo-Muñoz, the author of West Side Story as Cinema: The Making and Impact of an American Masterpiece, described in a 2011 interview what it meant to him as a young Puerto Rican to see the movie on screen: “I’d never in my life heard the words “Puerto Rico” spoken in a movie. And I’ve heard it very few times after that. Seriously. The fact that they said the words “Puerto Rico” in a movie and there were Puerto Ricans being portrayed on screen – even if only one was a legitimate Puerto Rican that was born-and-raised-on-the-island, Rita Moreno – we didn’t care.”

Regardless, it will be exciting to see how this new adaptation improves on the 1961 version. I’d like to see greater representation behind the scenes, as well as on-camera—I really hope that, as we find out more about this project, we learn some Puerto Rican creators are working on it in addition to Kushner and Spielberg.

Who would you like to see involved with the film?