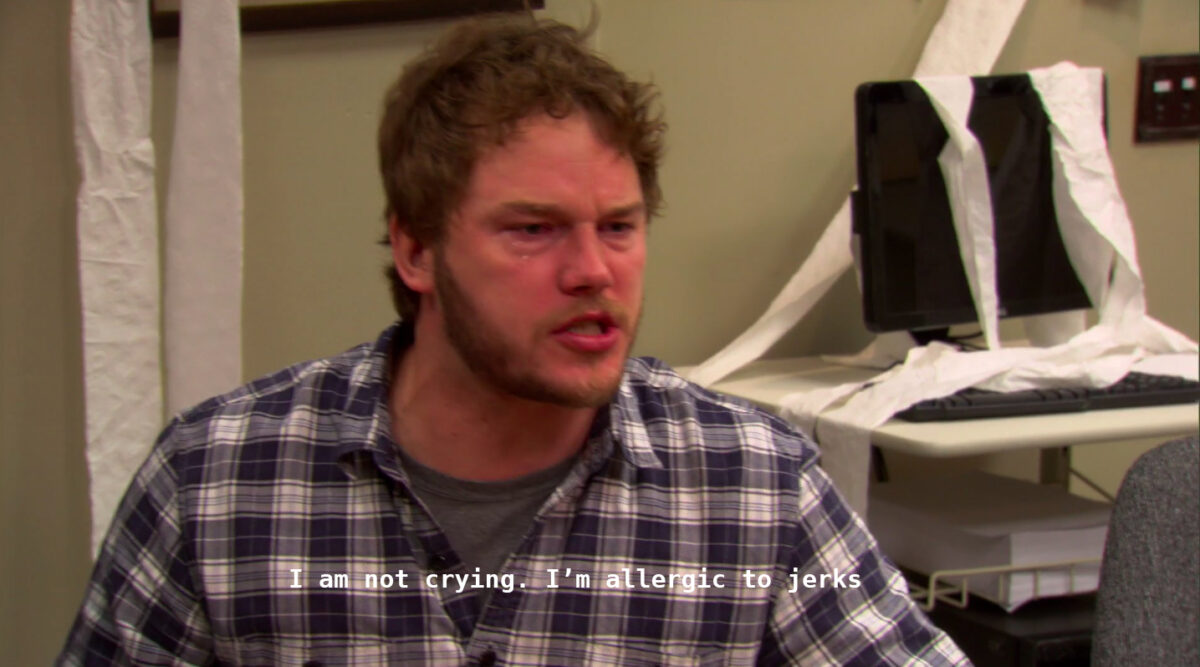 Imagine you’re named Chris, and then suddenly you’re put in a war with other Hollywood Chrises, but all those other Chrises were winning and you weren’t. You’d also text the Avengers to come to your aid and defend your honor, right? Just kidding, we all know these rankings of celebrities based on their name are just games on Twitter.

But for whatever reason, the Avengers did say THIS WILL NOT STAND and all took to their social media accounts to share their love and support for Chris Pratt. Okay so … here are my questions: WHAT was sent to the group chat and WHY was this the Chris ranking that broke it all? Is it because people started to question whether or not Pratt was a conservative or a Trump supporter? It sure seems that way.

From Mark Ruffalo to Robert Downey Jr. and James Gunn and beyond, stars of the Marvel Cinematic Universe jumped at the chance to say that they enjoy Chris Pratt’s company.

You all, @prattprattpratt is as solid a man there is. I know him personally, and instead of casting aspersions, look at how he lives his life. He is just not overtly political as a rule. This is a distraction. Let’s keep our eyes on the prize, friends. We are so close now.

No matter how hard it gets, stick your chest out, keep your head up and handle it.
-Tupac
You got this @prattprattpratt . Your family, friends, colleagues & everyone who’s ever crossed paths with you knows your heart and your worth!

not the russo brothers joining in to defend chris pratt….lemme go to sleep pic.twitter.com/oVx5wz8A81

What a world… The “sinless” are casting stones at my #brother, Chris Pratt… A real #Christian who lives by #principle, has never demonstrated anything but #positivity and #gratitude… AND he just married into a family that makes space for civil discourse and (just plain fact) INSISTS on service as the highest value. If you take issue with Chris,,, I’ve got a novel idea. Delete your social media accounts, sit with your OWN defects of #character, work on THEM, then celebrate your humanness… @prattprattpratt I #gotyerbackbackback (📸 @jimmy_rich )

Sorry. Just finding out about this nonsense. @prattprattpratt is the best dude in the world. I’ve spent hours & hours sharing my deepest truths with this man, as he has with me. Please stop assuming what he believes, politically or in any other way, because he’s a Christian. https://t.co/XSIgU9WemX

They’re all assuming that Chris Pratt is not voting for Trump, then? Okay, great! Glad to hear it, and sorry that Chris Pratt would rather be “apolitical” right now, but it’s 2020 and there are marginalized Americans who have their lives on the line if Trump wins. Whether Pratt is a Trump supporter or votes Republican or not, the root of the reason people are unhappy with him is “both sides”-y, “healthy middle”-promoting platitudes in the face of everything we’re dealing with right now. The jabs at him are rooted in valid criticism.

Then, we’ve also got his recent “voting” post that came off pretty poorly. A celebrity with a platform like Pratt’s using it to encourage people to vote? WOULD BE GREAT.

Twitter started to make some good points against the Avengers (and company) defending Pratt because, for the most part, they were pretty quiet when their fellow actors were being attacked for being women or being Black and daring to step foot in superhero movies, but have come rushing to Pratt’s defense over assessments of his political leanings. Not only did Zendaya get attacked online RELENTLESSLY over her role as Spider-Man’s new MJ, but I remember one of the arguments being that her hair couldn’t be red … seriously. So, she dyed it red just to shut them up, and I loved every second of it.

But as Brie Larson, Zendaya, Chadwick Boseman, Tessa Thompson, and more were attacked over and over again online, there were crickets. The minute people start to question Chris Pratt in a silly ranking on Twitter? RALLY THE TROOPS. It’s really disappointing to see them seemingly more concerned about a white male coworker being called a Trump supporter than racist, sexist harassment.

so when zendaya, chadwick, anthony mackie + brie larson etc. was getting dragged through the mud for their mcu roles it was crickets from the avengers assemble hive but when chris pratt is being called out for being a trump supporter here come the defense squad.. ion like that pic.twitter.com/e2HqyHKIdE

lee pace unfollowed chris pratt so here are some pics of the 6’5” king to celebrate pic.twitter.com/EUXYnPznqv

Avengers cast Avengers cast
when Brie Larson when people joke
is harassed about Chris Pratt
for 3 years being Republican pic.twitter.com/08neKSYA1o

chris pratt and all of his coworkers: pic.twitter.com/MbEgxDuj1m

A fun game turned into … whatever this mess is.

What’s really upsetting to me is that this ruined a VERY fun fundraiser for the Biden/Harris campaign that happened last night. Chris Evans, Mark Ruffalo, Robert Downey Jr., Zoe Saldana, Scarlett Johansson, Don Cheadle, (sort of) Anthony Mackie, the Russo Brothers, and Paul Rudd joined Kamala Harris to get fans of the Marvel Cinematic Universe ready to vote. There was even a fun bit where RDJ showed up with the gauntlet and said he used the Time Stone to see our future VP Kamala Harris.

But that’s now tainted by the knowledge that half the cast there jumped to the aid of Chris Pratt for losing a fictional poll on Twitter.

If they’d just let it go, we’d all have moved on by now. Pratt didn’t need defending, and the Chris rankings would inevitably continue on. Chris Pine fans like myself would cry that he’s always ignored. Chris Evans fans (also me) would yell he’s superior. Chris Hemsworth fans would … I don’t know, say something, and then Pratt’s fans would be like … but us! That’s the way it’s always been.

Now, the Chris ranking is dead so THANKS FOR THAT. (Or now we just have real reason to add Chris Messina instead.)