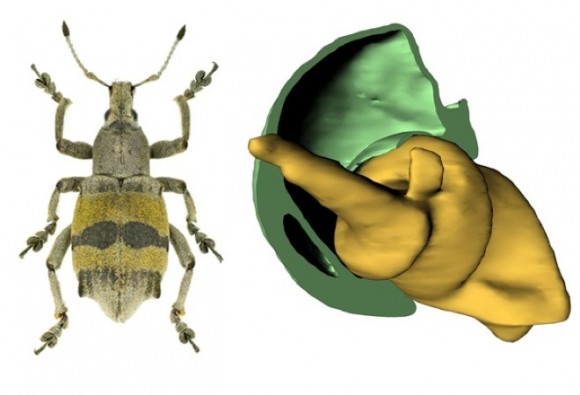 Why do we find this interesting? Because we’re always interested in the places where science shows us something we’d only seen in science fiction. So, guys, totally: the Mulefa. Those things from the third book in the His Dark Materials trilogy. The animals that had wheels. These weevils are totally like that!

At least, as much as any other tangentially related to science fiction real science discovery out there.

[Biologists] found that the weevil didn’t have the classic ball-and-joint or hinged appendages seen in other animals and insects. The beetle instead has a distinctly spiral-shaped tip to the leg, and a threaded coxa, which acts like a hip.

The two body parts screw in together, and then allow for around 130 degrees of rotation on the back legs, and 90 degrees on the front. It doesn’t make them better walkers — weevils are rather clumsy beetles — but it can help with climbing.

So the Trigonopterus oblongus uses its adaptation to be better at climbing trees in its Papua New Guinean home, where the Mulefa uses its synergy with the geographic and botanical characteristics of its environment to rush along at highway speeds. Absolutely the same thing, guys.