The White House is Officially Sick of This Crap, Requires More Signatures for Petition Responses 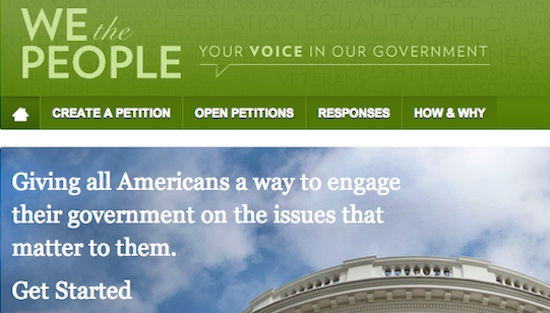 Since the Obama administration launched online petition site We The People in September 2011, the digital team at the White House has learned some valuable lessons about human behavior on the Internet — namely, that if you offer people a forum for voicing their opinions on the Internet, they are mostly just going to troll you with demands for Death Stars and official state Pokemon and that they be allowed to go start their own country because they really don’t like the way most people voted, which is how democracy works. While it’s kind of disappointing that the digital team for the White House didn’t apparently see this sort of thing coming — you’ve seen the Internet before, right digital team? — it seems like they’re starting to get a handle on things, or at least stemming the tide of petitions that will require action. Yesterday, they announced that they are quadrupling the number of electronic signatures a petition needs to get to merit an official response from the government from 25,000 to 100,000.

It would seem that after issuing a really excellent response to the Death Star petition ably demonstrating why it’s a foolish idea — especially in this economy — to build an orbiting fortress that destroys planets, the team behind We The People is seeking to go out on a high note as far as responses to goofy ideas are concerned. Of course, the petition will make it harder for less patently ludicrous ideas — like firing Aaron Swartz’s prosecutor — to get the signatures they need to earn a look from the administration.

Officially, the move is being made to give the most popular petitions more time to be thoughtfully considered by the White House. From the blog post announcing the move:

When we first raised the threshold — from 5,000 to 25,000 — we called it “a good problem to have.” Turns out that “good problem” is only getting better, so we’re making another adjustment to ensure we’re able to continue to give the most popular ideas the time they deserve.

Unofficially, we’re betting someone just got tired of being shouted out of the Oval Office when they brought up “the Death Star issue” to the President while he was trying to concentrate on fiscal cliff talks or get briefed on the latest developments in Syria.

If you’ve already got a petition up he move to require 100,000 signatures on a petition in the first 30 days it exists won’t be applied retroactively, so petitions that were up before yesterday only need to hit the 25,000 mark, at which point people can begin the breathless anticipation that always comes with waiting for a letter from the government.