Why We Deserve to See More of Arrow’s Mia Smoak 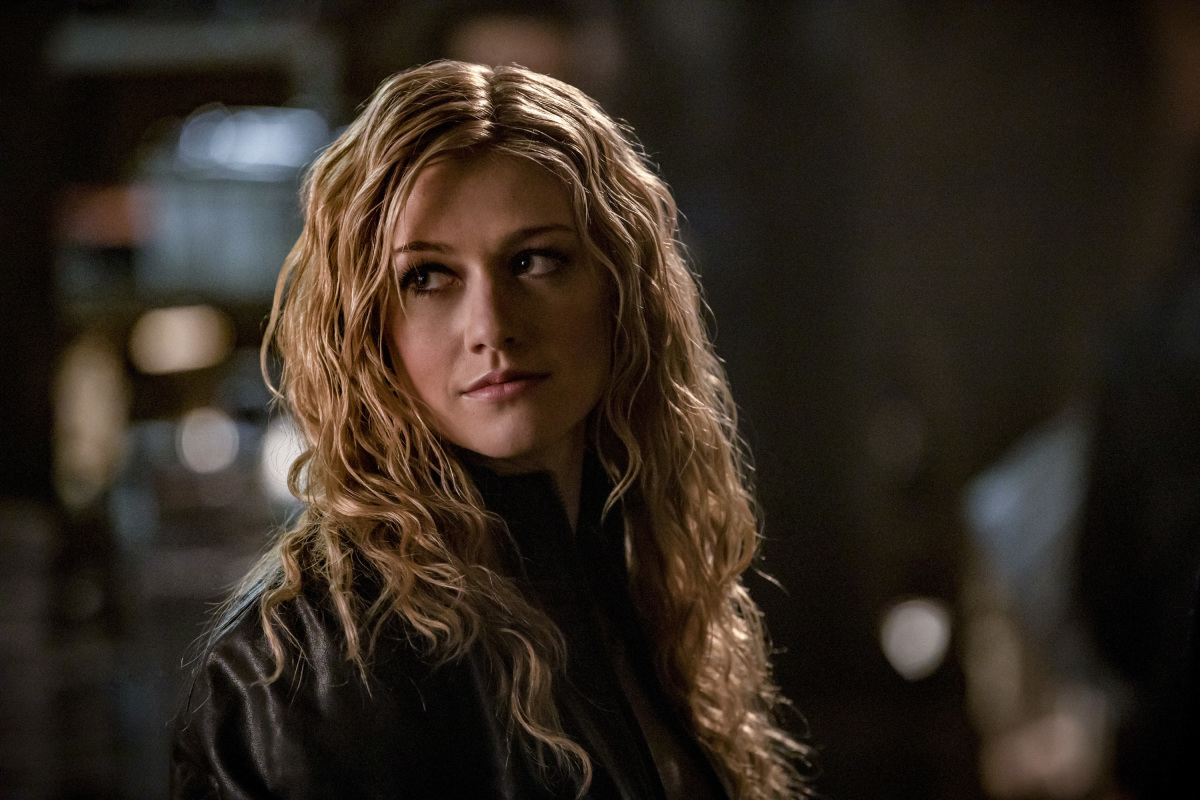 The CW’s Arrow episode “Star City 2040” not only solved some ongoing Season 7 mysteries involving Felicity’s future fate and the origin of the Archer system, but it also properly introduced us to the next generation hero we deserve: Mia Smoak.

One of the most significant changes back in eason 5 was the decision to abandon the show’s long-running flashback format. While most viewers would have likely cheered the demise of the tedious flashbacks—and Oliver’s truly awful succession of past life wigs—no matter what, the fact that Arrow decided to turn them into flash-forwards rather than nix the narrative trick completely has opened up an exciting new world of story for the show.

In these snippets, interspersed throughout each episode, we now see a vaguely dystopian version of Star City, set in 2040. We don’t yet know precisely what happened to turn the show’s present into this particular future, nor have we seen the fates of many of the series’ current major cast, but that’s fine; it’s the introduction of the literal next generation of Arrow’s story that’s the most fascinating part of this glimpse into the future.

Yes, the flash forwards feature a grizzled Roy Harper and a much older Dinah, scarred from years as the Black Canary. Rene’s now the mayor of a Glades that has become a shining beacon of success and safety. Felicity’s even around too, sporting a severe middle-aged businesswoman bob and a spotty history of her own as a vigilante known as the Calculator, attempting to atone for the sins caused by Smoak Technology’s creation of the Archer surveillance software.

But rather than focus too heavily on what has happened to the original Team Arrow in the intervening twenty years between then and now, Arrow instead decided to introduce their children. A much older William returns to Star City for the first time since the childhood days we saw earlier in Season 7, to find that Rene’s daughter has grown up to be a Canary in her own right, Diggle’s adopted son is an undercover ARGUS operative going by the name of Connor Hawke, and the mysterious female cage fighter known only as Blackstar is actually Mia Smoak, child of Oliver and Felicity Queen. 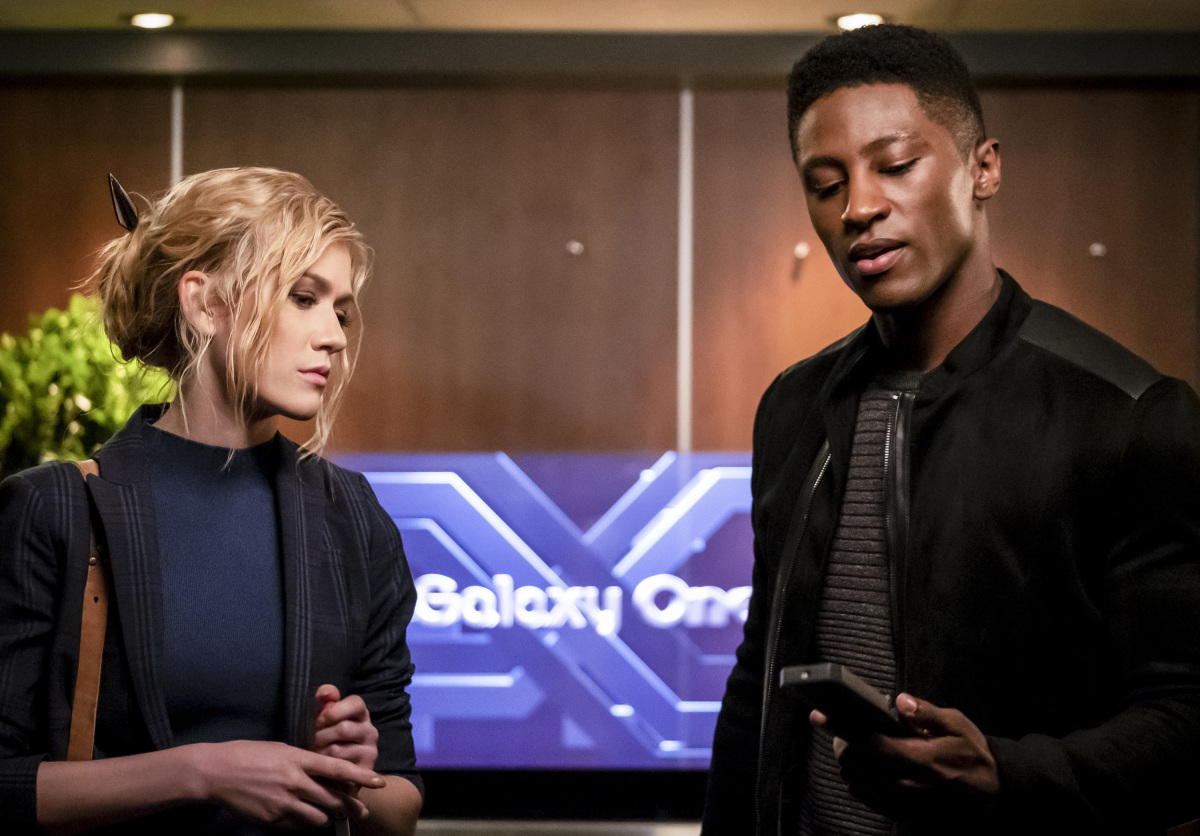 It was kind of a lot to take in, initially, given that these new folks pretty much only existed in brief snippets over the course of multiple episodes and weren’t given much time for anything like real character development. That’s why the decision to take a time out and feature an entire episode set in the future with “Star City 2040” was such a crucial moment.

Mia’s status as Oliver and Felicity’s daughter automatically makes her an important figure in the future of the Arrowverse, but she’s also a fascinating character in her own right—fierce and determined, stubborn and strong-willed.

Sure, there’s a lot we don’t know about her yet. What exactly happened between her parents when she was young? Why did she apparently have so little contact with Oliver? What was it like to grow up in what seems like near-total isolation, trained by Nyssa al Ghul? How did she end up on her own in the underbelly of Star City, channeling her rage to help her survive?

We deserve the chance to find those answers, and more.

As a character, Mia is almost a perfect blend of both of her parents. She has Felicity’s tenacity and intelligence, as well as her mom’s survival instinct (and, apparently, her huge heart, though it seems Mia guards hers a bit more closely). She’s got plenty of Oliver’s bullheaded stubbornness, as well as his inability to turn away from injustice—even when he’d maybe rather do otherwise—and she’s a badass fighter in her own right.

Was there a more satisfying sequence in this episode than watching Mia kick off her high heels, Sara Lance-style, to better beat the crap out of half a dozen dudes? Maybe only that final iconic shot of her in a cloak and hood, holding a bow and looking every inch like her father’s child. 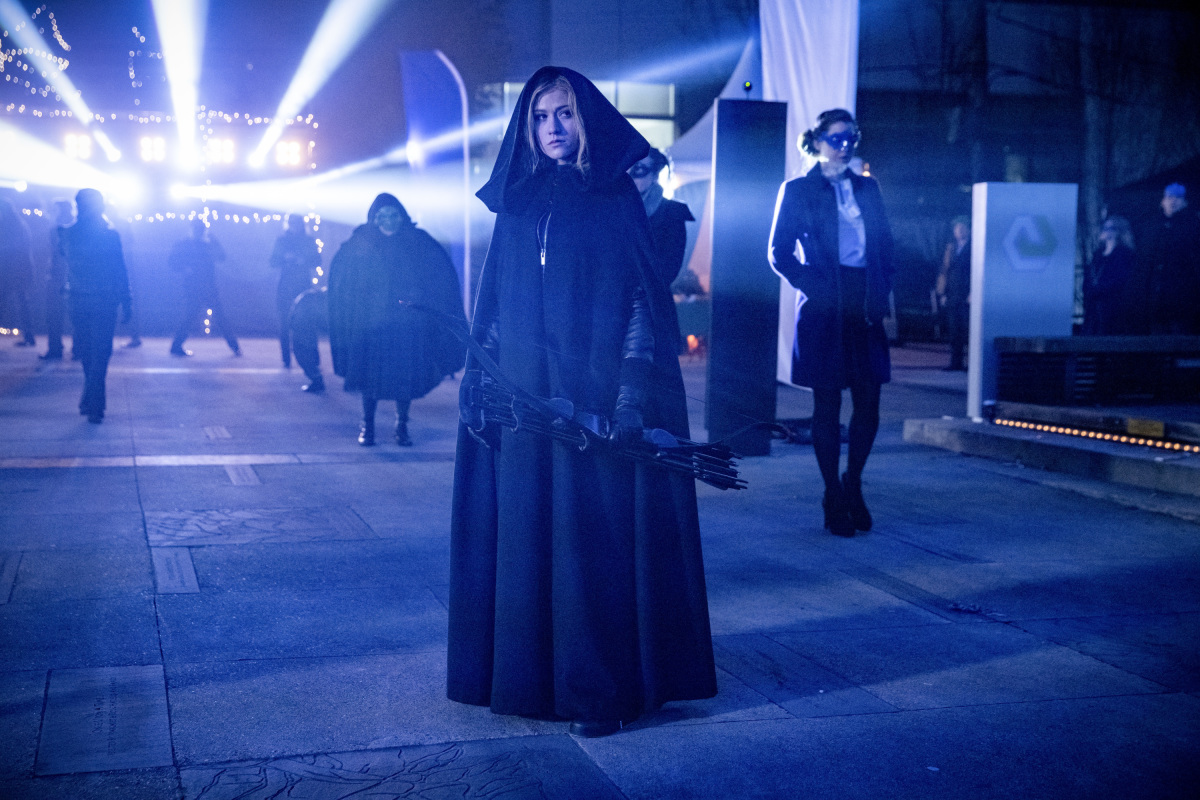 Mia’s furious hatred of vigilante culture and “heroes” in general puts her in a distinctly different position than either of her parents. Both Felicity and Oliver chose their lives on Team Arrow, repeatedly, even after being given multiple chances to walk away from it all, but what has all that done for their daughter?

It forced her to grow up alone, ruined the city her parents called home, kept her mother at a distance for most of her life, and made sure that most of her parents’ friends didn’t even know she existed. Arrow’s future timeline wrestles with the idea that being a hero doesn’t just require personal sacrifice; it asks the same or worse from the people close to the person doing the sacrificing.

Oliver and Felicity’s decisions—as well meaning as they might be—don’t just affect them. They’ve shaped the lives of their children and continue to impact them to this day.

In many ways, “Star City 2040” felt as much like a backdoor pilot (the show is ending next season, after all …) as it did an episode of season 7, forming a new version of Team Arrow and fully bringing the children of the original group together to carry on some version of their parents’ legacy. The gender-swapped nature of Oliver and Felicity’s original roles here—Mia as the Arrow and half-brother William as a sort of nerdy Overwatch 2.0—is extremely appealing, and the unresolved (maybe romantic?) tension between Mia and Connor Hawke provides plenty of fodder for shippers.

But most importantly, it introduced Mia as a fully formed character in her own right, with plenty of story of her own. Her complicated relationships with almost everyone in her life—from her mother to her half-brother to her whatever exactly Connor is—as well as her almost nonexistent understanding of who her father was, offer plenty of fodder for the future.

Though the show is drawing to a close, she’s a character worth exploring more fully, and whose story is one we deserve to see play out in a more in-depth way.

When Arrow first started, Oliver’s mission was not just to avenge his father; it was to clean up and improve the city he loved. Though his mission is apparently doomed to failure in twenty years, there’s a certain perfect symmetry in his daughter picking up his proverbial bow, and fighting to fulfill his dream in his place. Don’t take Mia Smoak away from us now, Arrowverse—not when we’ve only just met her.