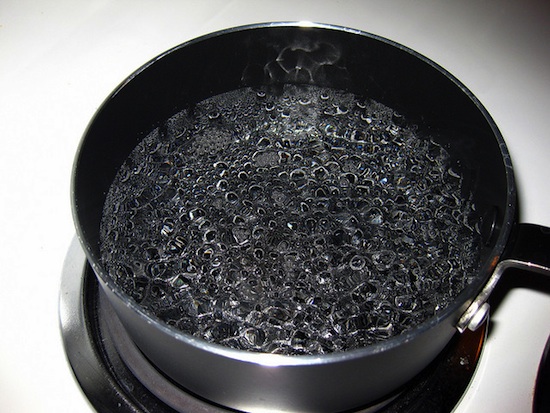 I don’t know how many times you’ve let water boil over the sides of a pot while cooking pasta, but if you’re anything like me the number is somewhere in the ballpark of “a bajillion times.” That travesty may soon be a thing of the past, thanks to nanoparticles which can disperse heat in boiling water, making sure your water comes to an extremely hot boil while remaining as placid as a remote mountain lake. A mountain lake filled with delicious spaghetti. Also, yes, I’ve totally had that dream before. It’s a happy place for me.

By coating 2cm steel spheres in nanoparticles, researchers were able to, in effect, greatly increase the surface area of the tiny metal balls by giving them a rough coating. That lets researchres create what is essentially an artificial vapor layer around the spheres. That artificial vapor layer replaces the one that usually forms at the surface of the pot, where bubbles roil and spray over the top of a pot that you stepped away from for like, seriously, ten seconds, how does this even happen every time? Anyway, the rough coating gave water a place to stretch and move along rather than moving violently to the top of the pot, which remained undisturbed.

This is new research, so there are clearly still some kinks to iron out. For example, there’s no word yet on the pressing matter of whether or not the steel balls will also let cooks boil water while still watching it. There’s also no reason anyone would want to have tiny steel balls in their fresh pasta, which seems like a lawsuit looking for a place to happen. Before you ask, no, we don’t know how you will be able to tell when your water has come to a boil without bubbles to indicate that it is, in fact, very, very hot. Put your hand in it, I guess? Not, like the hand you use a lot, though. That would just be silly.