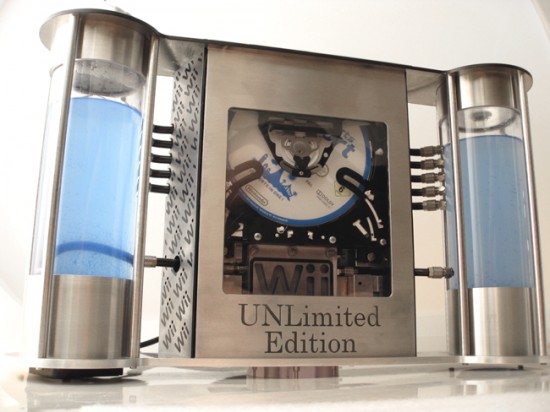 For all of the Wii’s faults, the console is actually quite aesthetically pleasing. Case modder Martin Nielsen took that sleek, white rectangle and turned it into something of which a mad scientist would be proud. Almost as if ironically, Nielsen water-cooled the unit with tubes that look similar to the bombs from Die Hard: With a Vengeance, even though the underpowered-by-current-generation-standards console is one of the most least likely pieces of hardware to even come close to overheating. Dubbed the UNLimited Edition, the case is made of CNC-milled aluminum, the unit is cooled by two 22 cm coolant reservoirs filled with cerulean-tinted liquid, and the front of the case is transparent so one can see their copy of Super Smash Bros. Brawl spin while they’re browsing forums for Friend Codes. Discs load in through the top, and the unit is wall-mounted, so one can make room on their shelf for a system that actually has games releasing in the month of May.