Watching Realistic War in The Force Awakens and The Hunger Games 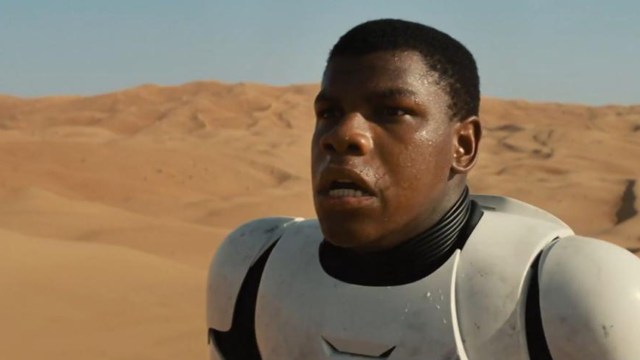 Fans across the country and around the world are facing the last week of waiting for the new Star Wars movie, another installment in one of our most beloved American stories. Trailers for The Force Awakens linger over ruined battleships blending into dunes, promising us that we will visit a desert planet fighting against a military occupation. Twenty-first century America has spent a very real two decades invested in a global war on terrorism, including military occupation of desert countries. We should pause to think about what that means for our expectations for The Force Awakens and for audiences containing adults, military veterans, and our own children. In Star Wars, after all, we root for the rebels and against the Empire.

In 1977, Star Wars Episode IV: A New Hope drew mass audiences and launched a now-beloved franchise, and it did so while showing imperial involvement in a desert world in such a way as to retain a PG rating (after the fact). In The Force Awakens, audiences will once again spend time on a desert world battling an invading or occupying military. This time, the rating (unavailable in 1977) is PG-13. But what does that rating mean in 2015?

In 1977, the U.S. was just barely out of the decade-long Vietnam War, and many people packing theaters to see Star Wars were veterans or the families of veterans, but they were veterans of a jungle war in which less than half of deployed soldiers saw combat.

In 2015, the U.S. has yet to emerge from nearly two decades of war in deserts, cities, and mountains. We have fewer veterans than we did for Vietnam, since our all-volunteer military did not resort to a draft. Many vets saw more than one deployment; many received MOUT (Military Operations in Urban Terrain). Since there was no “front,” many saw action, even those in technically non-combat positions. Our wars in Iraq and Afghanistan are occupations. They are urban and rural. They are fought in deserts and mountains.

Vietnam saw some of the first embedded reporting, and for the first time, mass civilian audiences began to have some sense of what occurred during modern warfare. Today, video games bring hyper-accurate simulated warfare into homes for dozens of hours a week. Call of Duty promotes the money it puts into realism, and it’s enormously popular with both military personnel and civilians. While rated M, little stops teens from playing such war simulators.

In fact, we seem to believe that our teens have developed a discriminating taste for realistic warfare. Author Suzanne Collins researched the Iraq War while writing her YA series, The Hunger Games. The team who made the most recent film installment, Mockingjay Part Two takes this one better. In this PG-13 film, the urban battles feature a range of IEDs designed identically to those used in Iraq, and children are blown up onscreen, just as happens on a regular basis in our current warzones. At least some of the city battle scenes seem to have been filmed at a MOUT site, because they’re so similar to actual training facilities. Questions about how the hero Katniss’ Everdene’s PTSD is shown have been raised, but rarely is the potential for PTSD of the audience acknowledged, nor the potential to traumatize teens unprepared to face realistic depictions of battle on a night out at the movies.

Certainly, a veteran who is aware of her or his combat-related ptsd might choose to avoid an R-rated war film, but why would this same soldier think to avoid a PG-13-rated kids’ movie? We might well ask that as we head into the last stretch of anticipation for The Force Awakens. Mockingjay Part Two shows that we are now willing to apply that PG-13 rating to realistic depictions of urban warfare. In The Force Awakens, our heroes take part in a resistance to a military force occupying their desert home. If the teasers and trailers are any hint, at least sometimes they use improvised weapons (sometimes the Millenium Falcon herself feels a bit improvised). The lackadaisical transit checkpoints and house-to-house searches in A New Hope are not likely to be seen. (“The door’s locked, come’on” indeed!) Will we see vehicles gunned down because they don’t stop at checkpoints? Will we see families huddled weeping against their walls with guns to their heads while stormtroopers flip every drawer in their homes? Or will we only see children blown into pieces in this PG-13 movie as we did in Mockingjay 2?

What does it mean that we no longer want some fantasy in our science fiction? What does it mean that we raise our children to have this same discerning eye for the creases and filth in uniforms sweated in for days on end? For the curb that doesn’t quite match and could contain an IED? Millions of kids worldwide have no choice. They’re surrounded by war. Every soldier learns to ask the local kids where the IEDs are. They know. If they don’t know, they die first. After two decades of a global war on terror, have we forgotten that our entertainment is a choice? That war is a choice? Young parents today have barely known a time when the US was not at war, formally or informally, in the Middle East. The Hunger Games series was written for the Millenials, and like Mockingjay Part Two, some are now all grown up. Many of my generation were toted along as kids to see Star Wars, to see a historic moment, the birth of a great new American myth. Many of us are counting the days to see the newest installment. Is part of that myth now realistic depictions of occupation and urban warfare? Do we want MOUT to be part of our kids’ bedtime stories?