Ford, Give Me Strength: Watching and Reviewing Star Wars: A New Hope 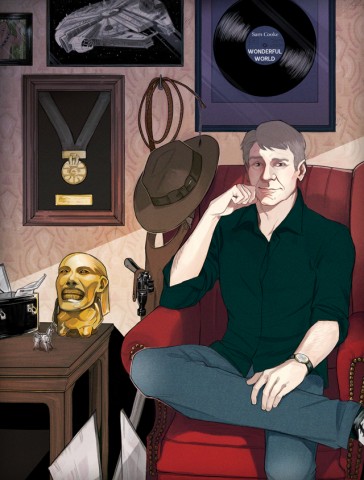 Welcome to ‘Ford, Give Me Strength’, a series where we’ll be watching and reviewing Harrison Ford movies in celebration of this fantastic actor, pilot, and human being. Check out past reviews here.

So this is really exciting for me.

I knew, eventually, thanks to my mission to watch and review Harrison Ford movies in chronological order, that I’d eventually stumble upon Star Wars. I just didn’t think it would be so soon! Don’t get me wrong; I’m absolutely delighted. There’s so much excitement being generated online thanks to The Force Awakens coming out in December, but it’s not like I need an excuse to re-watch.

I was introduced to the original trilogy in middle school and have nothing but fond memories of renting these movies from the video store on Friday night (back when Blockbuster was still a thing, but now I’m just dating myself).

In many ways, Star Wars was my first fandom, even if I didn’t know the word for it at the time. My family had gotten our first computer within that same timeframe, and I spent hours upon hours learning every bit of inside information and piece of trivia I could about the films. I was also still coming to grips with my epic Harrison Ford crush—but I knew enough to know that Han Solo was just plain cool.

Once I acquired the original trilogy on DVD, that was when I first learned that Ford wasn’t even the initial casting choice for Han. After working with George Lucas on American Graffiti, he’d been called in to read sides with other actors who were auditioning for parts in Lucas’s new project—Luke and Leia, specifically. But as you can definitely see from this short audition reel, there was no denying that Ford was the only one who could give the role the necessary cockiness and gravitas in equal measure, even in the same scene:

Anyway, on to the film!

I only remembered right as the movie was starting that Han Solo doesn’t even make his first appearance in this film until the scene in Mos Eisley (which is like 45 minutes in), but when you really think about it, A New Hope is Luke’s story anyway. As the audience, we’re like the farmboy from Tatooine—far removed from any goings-on in this big galaxy until these two droids show up and start us on our adventure.

And yeah, okay, Luke is a little bit whiny at the start, before things start to get really hairy—but he definitely grows up big time, both through the events of this movie and the entirety of the trilogy.

On the other hand, Han is, well, everything Luke isn’t. He’s head-to-toe bravado; whether it’s an exaggerated confidence, a part played to perfection after years of curating a reputation as a skilled smuggler, is anyone’s guess. He prefers a straight fight to sneaking around the maze-like innards of the Death Star, but he’s also willing to shoot Greedo under the table in order to get the drop on the ill-equipped bounty hunter. His actions over the course of Episode IV, however, prove that he has some sense of loyalty to those he feels have earned his trust in return—even when his first instinct would be to oh, take the money and run.

One of my favorite pieces about Han Solo is this one written by Meghan O’Keefe that makes the case for Han actually being a feminist—and I can see it. While it’s true that more of his softening happens in the midst of Empire Strikes Back and Return of the Jedi, we start to see the beginnings of it here. Against his better judgment, against all societal dividing lines, he finds that his fascination with Leia’s “spirit” is beginning to override his earlier annoyances. He’s attracted to her brain and her feistiness above all other, ahem, assets. Han’s banter with Leia is one of the chief highlights of the film for me (“Into the garbage chute, fly boy!” ranks high on a list of quotable moments), and it’s through his interactions with both her and Luke that the character ascends past what could have easily been two-dimensional bad boy status to something even more layered.

Ford has made no secret over the years that he originally pitched Han’s death to George Lucas, but that Lucas ultimately decided against it. Ford wanted a hero’s death for Han, likely a scenario where he sacrificed himself for the greater good (or, in this case, the Rebellion). But like the rest of us, Ford’s come around to admitting that he’s actually glad the scoundrel was never killed off. It gave Han the opportunity to have more of a hero’s journey instead of someone we would all still be in mourning for.

Recently I conducted a poll on Twitter to find out who my followers’ favorite Harrison Ford character was—Han Solo or Indiana Jones. Although Indy held a decent lead for most of the time that the poll was open, Han managed to come out on top in the end. I don’t think he’d have it any other way.

Now for the ratings:

Humor: Five out of five Kessel Runs. There are so many choice one-liners dropped it would be impossible to quote them all. Honorable mention goes to the scene where Han tries to stall the Imperials from coming up into the Death Star’s detention block.

World-saving: Five out of five blasters at your side. The man literally Falcon-punches Vader out of the way and gives Luke a straight shot to fire on the Death Star. He gets at least 50% of that victory.

Swoonworthiness: Five out of five “your worshipfulness”es. There’s no denying the swagger—and who wouldn’t want this guy coming in to rescue you with guns blazing?

Overall “Ford-ness”: Three out of five jumps to lightspeed. He’s not quite grumpy in this film, so I don’t feel comfortable awarding him full marks since he hasn’t reached full curmudgeon yet.

We’ve made it through another review! And … we’re fine, we’re all fine here now, thank you. How are you? What’s your first memory of seeing this film? And, at the end of the day, who shot first?

Carly Lane is a writer based in New York City who specializes in obscure pop culture references and miscellaneous geekery. You can find her on Twitter at @equivocarly.

Emilie Majarian is a UK-based freelance digital artist & illustrator. Her interests include Robert Frost poems, survival horror videogames, existential nihilism, and smooth jazz. You can find her on Tumblr, Twitter, Facebook, and deviantArt.