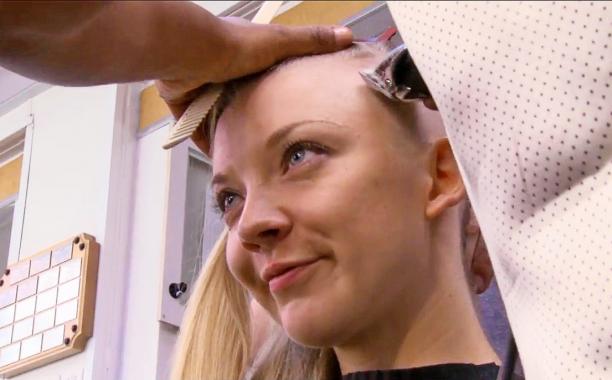 The video won’t embed directly, so head over to Entertainment Weekly to see Dormer put on a brave face through the shaving. The video also features appearances by Hunger Games make-up and special effects artists and Face Off judges Ve Neill and Glenn Hetrick! They share how Cressida’s look came to life.

I had a really interesting conversation with Frances Lawrence, I said, you know, what about half the head? And he was like “I love that idea!” He was like, “I was going to suggest that to you.” Because we both felt that it was more “Capitol.” The book doesn’t actually specify how much hair, so we felt liberated to make that choice.

And I feel liberated to love you forever, Natalie. Never change. Except your hair; you can do whatever you want with that, obviously.