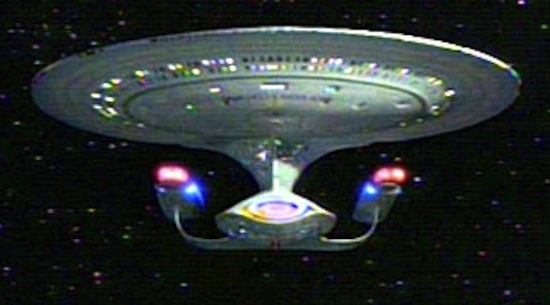 The warp drive that powered the Enterprise and enabled the ship to travel faster than the speed of light may not be a flight of fancy, says a NASA physicist. A design for a similar drive was proposed by Mexican physicist Miguel Alcubierre almost 20 years ago, but its energy consumption would have been outlandish, rendering it impractical. However, Harold White at the the Johnson Space Center has made some tweaks to the original design that he thinks could move faster than light travel from fiction to science. No, it doesn’t involve dilithium crystals. Yeah, we’re disappointed about that too.

The proposed warp drive sees a ship the size of a football suspended in a ring which is also the warp drive that distorts space time around it, providing faster than light propulsion technology. It would do this by (very, very theoretically) expanding space time in front of the ship and contracting it behind the ship, while the vessel itself remains in a bubble of unwarped space time. Which is pretty neat in concept, even if the whole football-ring design does put the lasting image of the world’s most famous erectile dysfunction commercial back in our head.

White spoke about his work on the warp design earlier this week at the 100 Year Starship Symposium, where he outlined changes to the design that could cut its energy consumption. One of the major changes proposed is turning the flat ring in the original design into a more rounded design reminiscent of a giant, time warping space donut and could drastically slash the amount of energy needed to operate the ship. More energy savings could, in principle, be achieved by introducing oscillation to the intensity of the space warp, moving regularly from a strong warp at the front of the ships to a strong warp at the aft and then back again.

In the original Alcubierre design, the warp drive would have needed energy equal to the mass energy of the planet Jupiter to operate the drive, which is really a lot to ask. Then again, we are talking about doing things that spit in the face of the laws of physics here, so maybe we shouldn’t expect them to be too easy.