A Warm and Fuzzy Ship Recommendation for 2020

When a chameleon and a beaver love each other very much ... 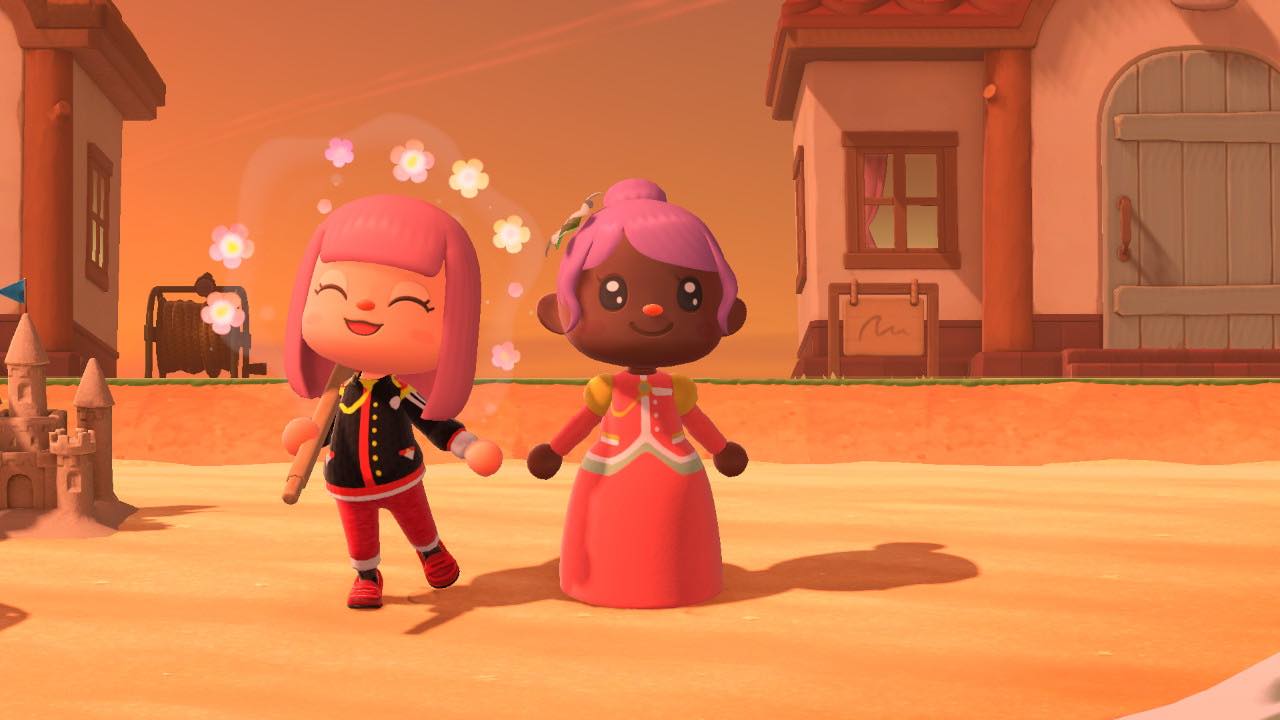 Animal Crossing: New Horizons was not the game I expected to latch onto this year. Generally, it’s not the type of game I play, but it appealed to me because it gave me a chance to chill with friends who I wouldn’t be able to see thanks to the pandemic.

In my first week I somehow managed to make it to the fabled “Scorpion Island” and, I kid you not, Flick showed up on my island two days later. My friends told me to save every scorpion I caught and I stared in awe as the chameleon gave me enough bells to pay off the loan I had on my house … about three times over.

Also, Flick is, like, adorably dramatic, bashful, and is unapologetically rocking some Hot Topic circa early 2000s vibes.

“Can’t wait for you to meet CJ,” a friend said to me shortly after I met Flick.

“CJ?” I asked like the sweet summer child that I was at the time. “Who’s that?”

I could practically feel the shipping goggles being aimed in my direction as my friend typed out the response, “Flick’s boyfriend.”

Full disclosure: it’s not game canon that these two are dating, but if you’re like me you enjoy indulging in non-canon ships from time to time (and by “time to time” I mean “as much as possible” I will whip out my ships faster than Maes Hughes pulls out pics of his daughter).

Who are flick and CJ? 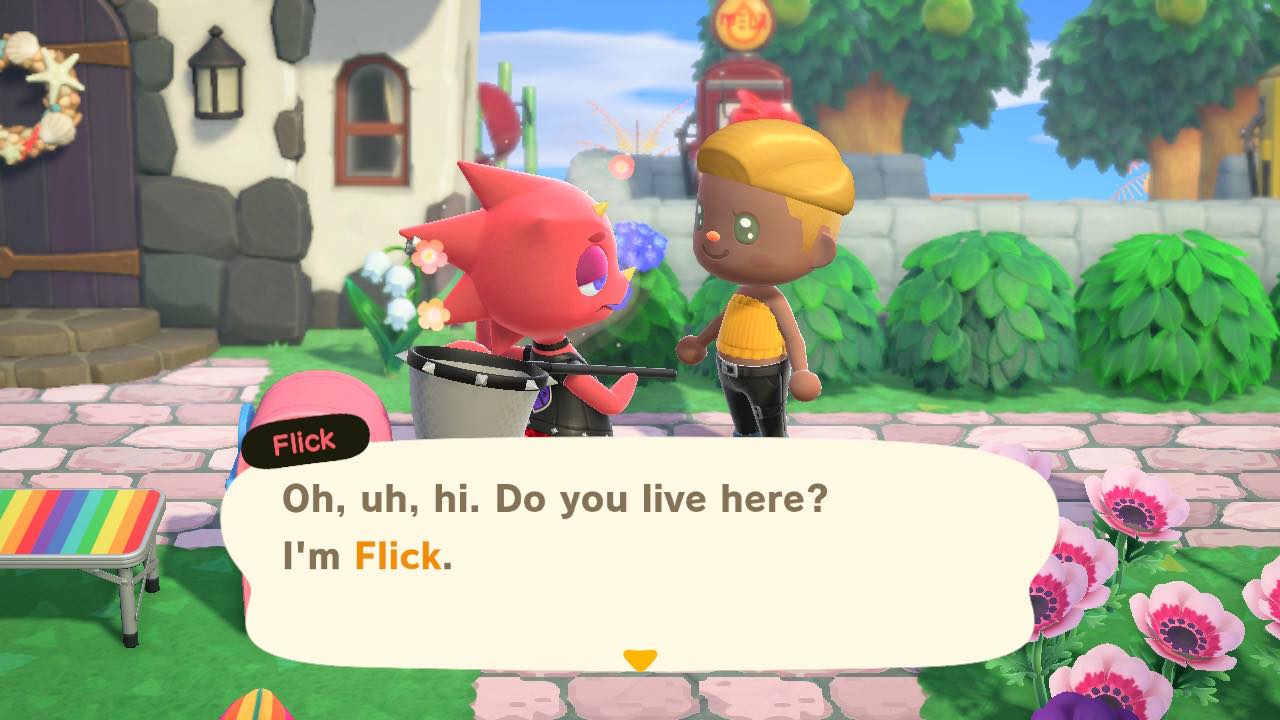 In ACNH you get a visitor every day. Flick and CJ are two characters who can potentially visit your island, and frankly, depending on the time of year, you can make some serious bank off of them. Flick will pay a hefty amount for the bugs you catch while CJ will do the same, but with fish. I’ve easily made multiple millions off of them. You can also get sculptures made of your catches as long as you’re willing to turn in 3 of them.

What would their fanfic tags be?

Childhood friends: as you interact with the two you find out that they grew up together, their families close to one another. I don’t know much Animal Crossing lore but a quick look at the Wiki says that they might be the sons of past characters who’d come to your island for the Bug Off (Nat) and the fishing tournament (Chip). 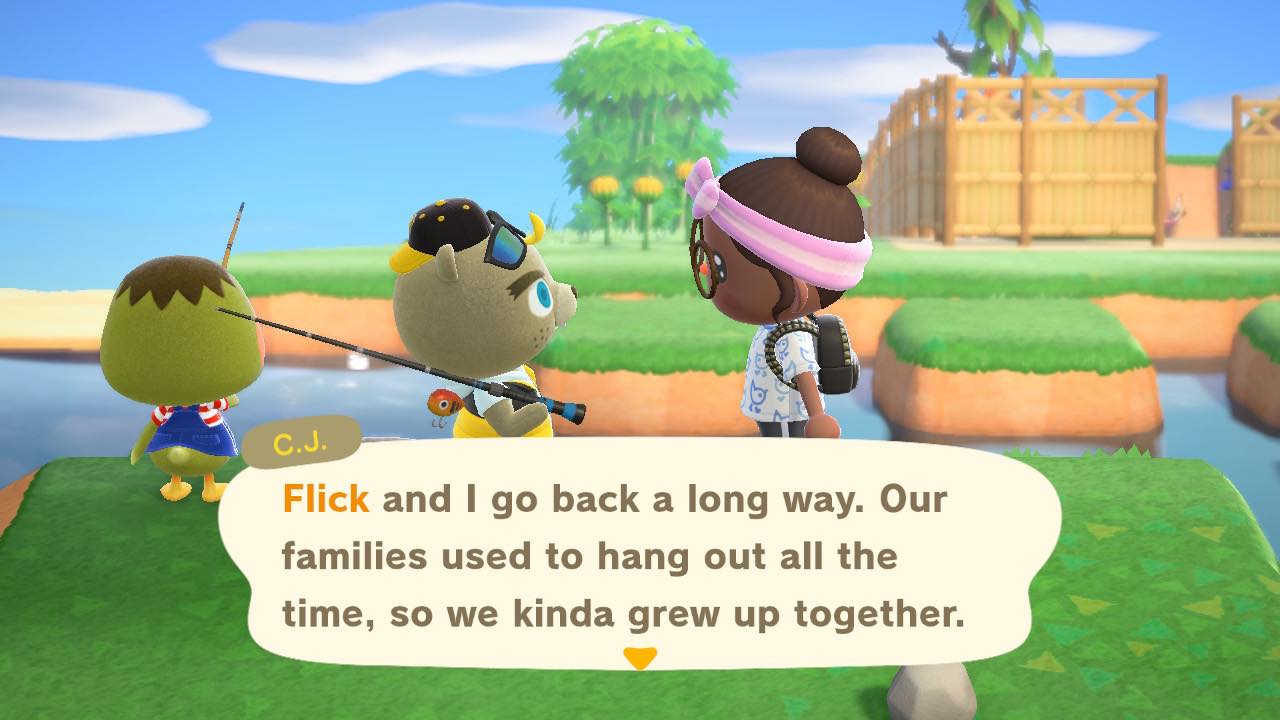 CJ reveals that he and Flick go way back.

Business partners: notice the patch they wear on their clothes? Turns out the two run a business together. I’m not sure what they do with the bugs and fish they buy off of you, but it must be pretty magnificent since they’re willing to take an unlimited amount. Outside of that, Flick’s an artist while CJ has a streaming channel (Get it? Streaming? Cuz he’s a beaver? Who catches fish?).

Opposites attract: I’ve already mentioned Flick’s character traits and I’m delighted to report that CJ is the exact opposite. He’s a joyful little beaver with fish puns in every sentence. Sadly, he’s not nearly as poetic about receiving fish, but he’s really enthusiastic about his channel and obsessively takes pictures for his chat group.

BUT THEY WERE ROOMMATES: yep, the nirvana of ship tropes has descended upon our humble island. Flick and CJ live together, and from what I can gather they’re the only characters who do. Not only that, but according to CJ, at least, they know each other so well that it just made sense for them to become roommates—wink wink nudge nudge. 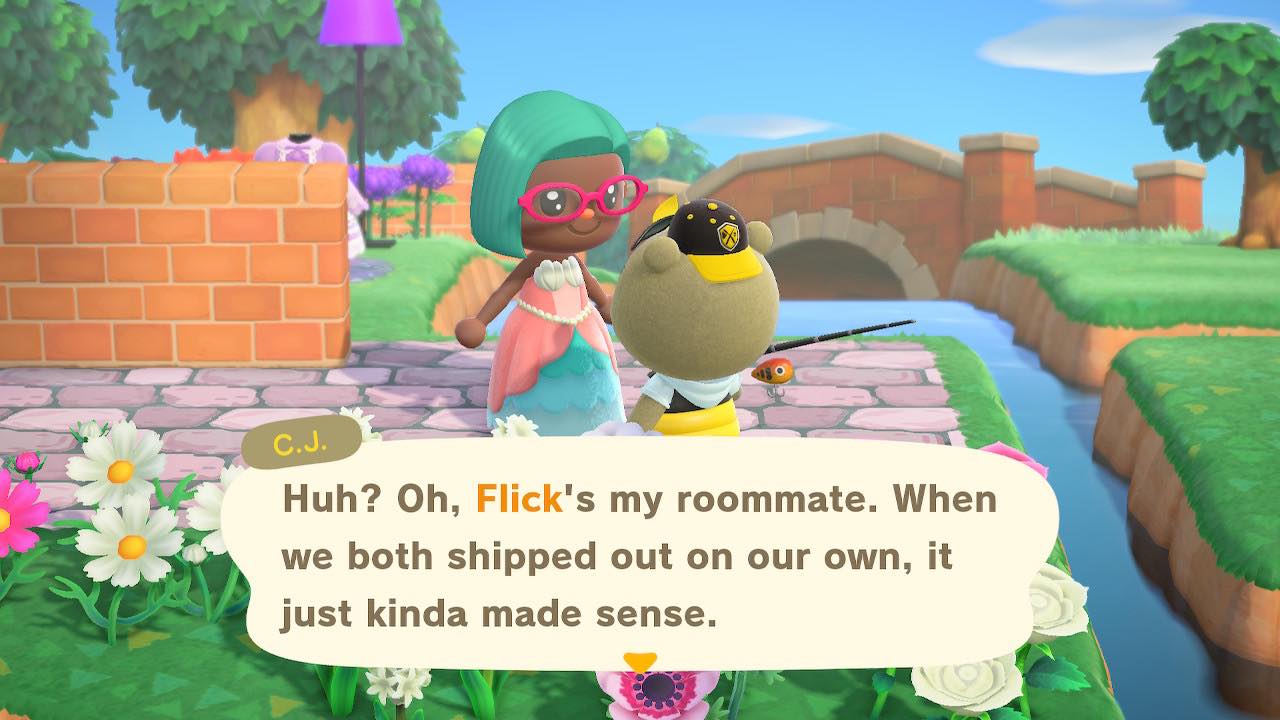 It just made sense for them to become roommates (ayeeeee!)

DINK: I’m adding the “dual income no kids” tag because these two are stupidly wealthy. Like. When the dorado still swam through the rivers they were worth 15 THOUSAND bells. CJ would up it to 22,500 PER FISH. One time I filled my pockets with them (bless the big fish island) and CJ didn’t even flinch. “A whole swarm? Reel nice. How’s 900,000 bells?” Then he had the nerve to ask for more fish because he’s got bells still jingling in his pockets!

And Flick’s the same way! Gave me almost 500,000 bells after my trip to Scorpion Island. “Let me know if you have more,” he said. I should also point out that they aren’t making money off of their side gigs. Flick does those art commissions for free and CJ reveals in his fishing tournament (if you get a gold trophy) that he might get, checks notes, 10 new followers from this. He doesn’t even care. He just does it for fun.

You find out that those commissions Flick does are of the bugs you turn in AND the fish. When you ask CJ for a commission, he proudly proclaims that Flick makes them, then proceeds to compliment the heck out of him. Not only does he call him a genius when it comes to his art, but when you get the commission in the mail CJ attaches a letter that says that his partner just … flows.

In some aspects, it may feel a bit one-sided. CJ’s the one who tells you family stories about Flick and his dad. CJ’s the one who tells you that they live together. But really, it just fits his character to be the more outgoing one. He even stays in one spot when you find him on your island whereas Flick wanders around all over the place, getting lost in his thoughts, and even telling himself to calm down his excitement levels. But we do know that he’s comfortable around CJ, after all, he’s willing to make models for him, and if you run into him the week of the Bug Off he straight up tells us that he’s the only person he really talks to. 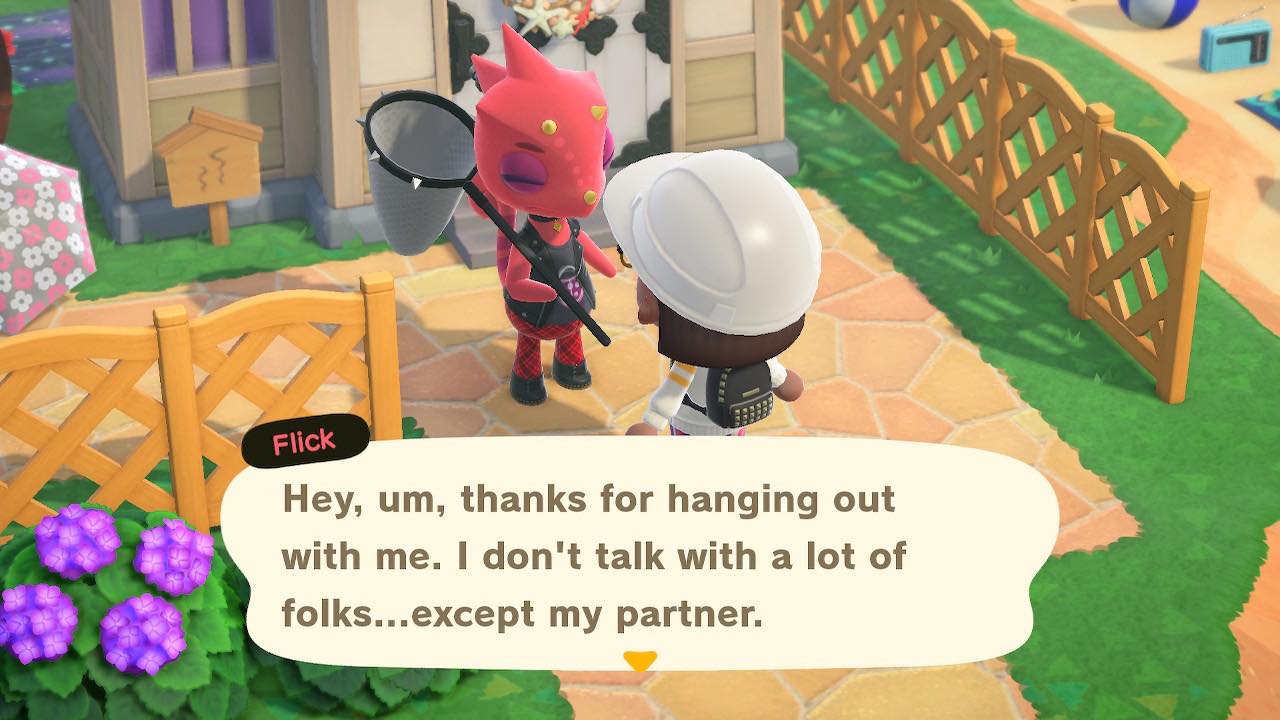 I should also note that according to the Wiki, in the Japanese dialogue CJ reveals that Flick doesn’t get along with the rest of his family, especially his dad. Is that a hint of angst I detect? Guess it makes sense if your family wants to eat the bugs you’re trying to worship.

Also, I’m sorry, but … they CONSTANTLY call each other partner. Not friend, not business partner, just … partner. They’re dating. Thassit!

Flick is clearly an introvert who struggles with having self-confidence. Anytime you get a sculpture, he nervously talks about how he couldn’t capture the exact likeness when he most certainly does. He also lets out a tiny victory cry of “scored a commission” when you ask to have something made. My headcanon says that CJ’s the one who convinced Flick to start offering commissions. CJ’s his number one fan, so he encourages him all the time

Flick does gain more confidence, venturing to islands and talking to the player. He also teases CJ a bit because the fish models never reach the “grand” status that some of the bugs do. Flick has six bugs in particular that he’ll make ENORMOUS models for, but he never makes any of the fish that big (not even the sharks).

Their house is on or near a river, and there’s plenty of room for Flick to have an art studio and for CJ to have a streaming set up. He’s totally tried to stream Flick making models, which makes his boyfriend extremely flustered.

Flick writes sonnets about his love for CJ and CJ responds with “nice” followed by a fish pun. CJ’s able to gush about his boyfriend to everyone else BUT Flick. Flick’s words are so beautiful and CJ can’t even begin to describe how his boyfriend makes him feel … not to his face, anyway.

Coffee shop AU with Flick the barista telling you the theatrical origins to all the menu items. CJ always starts his day with coffee (this is canon, he mentions needing coffee during the fishing tournament) and gets something new every day just to hear Flick’s stories about how the beans from some far off country are ground into hot, liquified perfection before adding rich vanilla creams and decadent chocolate syrups.

That’s all I got for this ship. Let me know if you’re into this ship, too, I know the Animal Crossing fandom is full of different pairings. I also know that most of us have created our own little stories about our villagers, someday I’ll regale you of the tales of Marshall and his various encounters. 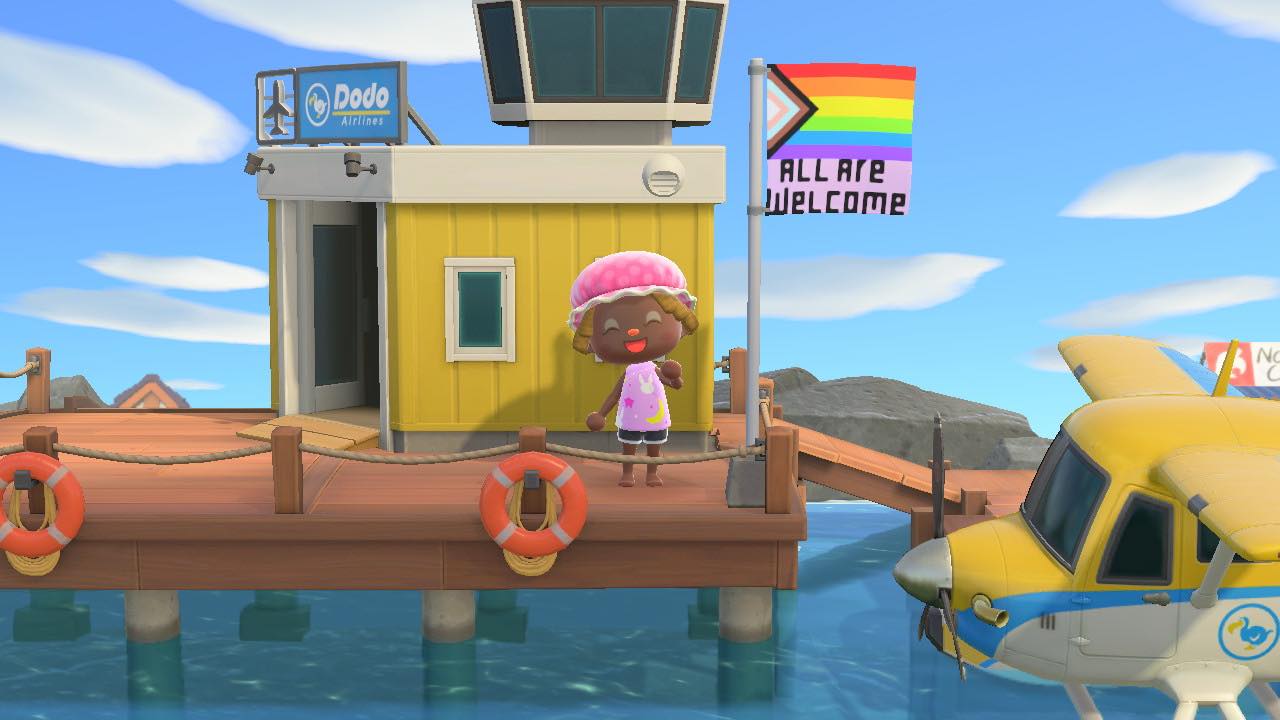 The entrance to my island has a clear agenda :)