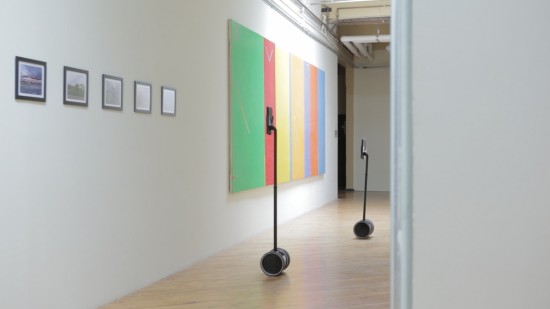 This may very well be the next big thing in remote-conferencing. A small startup located in Mountain View, CA by the name of Double Robotics is looking to revolutionize the way we communicate in today’s world, by strapping an iPad to a Segway. The invention, simply called “Double,” is now available for pre-order and will be shipping in early 2013. So what exactly does it do? Basically, it serves as a body double for teleconferences, allowing users to move around in a room, interact with different individuals, and connect with work, manufacturing, or school environments in a new way. So, a CEO can sit in his office in Manhattan and breathe down his branch managers’ necks in San Francisco.

Anyone who has had to pick up and move their laptop to show someone on the other end of a video chat those great new blinds in the living room knows how much a lack of mobility can make a video call next to impossible. Well, David Cann, Marc DeVidts, and the folks at Double Robotics feel your pain and are working to change video chat and videoconferencing for the better. Double Robotics’ official website unsurprisingly aptly explains Double:

Double is the simplest, most elegant way to be somewhere else in the world without flying there. The minimalist design and intuitive touchscreen controls allow you to freely move around without inconveniencing others. You can stay at eye level, whether sitting or standing, by adjusting your height remotely, which makes conversations fluid and real. Retractable kickstands will automatically deploy to conserve power when you are not moving around. Efficient motors and lightweight design give Double the ability to last all day without recharging the battery.

Double really does look like an impressive piece of technology. What the website’s blurb doesn’t mention is that the device can be charged in two hours using an AC wall adapter and doesn’t need to be plugged back in for another eight. Double is also only 15 pounds and works with every iPad that features a camera. Both the iPad attached to Double and the user’s iPad must be running the same app in order for the device to function. Double’s movement can be controlled remotely via iPad, iPhone, iPod Touch, or even a laptop.

That’s one heck of an iPad strapped to a Segway! Double is now available for preorder here for $1,999, not including the cost of the iPad. That sounds like a lot, yes, but consider this: You’re buying a robotic body double with all the features we mentioned up above that you can control from halfway around the world. See Double in action right below.

Double looks like it could be a radical change to the way we conduct videoconferences. That said, I can’t help but shake the feeling that this could turn into a near-future horror flick. Picture this:

It’s the end of a long work day at the office and everyone’s headed out , but John stays behind to work on the last few earning summaries. “Just try to get out of here and get some sleep, John,” says Trish, a project engineer, with a smile. Cut to later that night. The office is pitch black and Charlie looks up from his computer in response to a soft whirring sound from down the hall. When he goes to check it out, he notices that one of the videoconference body doubles is missing from its charger. He kneels to look at the power cord and a blue-ish light turns on from behind him; he slowly looks back.

Cut to John running into his office.

Cut back to John on the phone: “The body doubles. They came alive. I–” Dial tone.

John drops the phone and looks back to see the blue light slowly getting closer.

I’m pretty sure it would be a blockbuster.