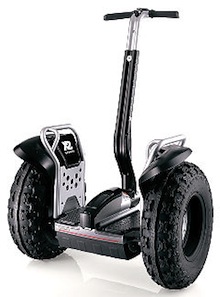 Jim Heselden, who bought the Segway scooter company from Dean Kamen in 2009, was found dead yesterday morning on his British estate. Heselden was at the bottom of a cliff with a Segway x2 scooter nearby; a police spokesperson told the Telegraph that Heselden had “fallen from the cliffs above on a Segway” and that foul play was not suspected.

According to the British media, Heselden, 62, plunged into the River Wharfe while riding a rugged country version of the two-wheeled transporter on Sunday.

“Police were called at 11.40 a.m. yesterday to reports of a man in the River Wharfe, apparently having fallen from the cliffs above,” a spokesman told The Daily Mail.

A Segway was recovered from the scene. “At this time we do not believe the death to be suspicious,” the spokesman added.

Heselden was worth around $265 million and ranked 395th on the Sunday Times Rich List.

Onionesque twist aside, tragic story, especially in light of Heselden’s leadership as a British philanthropist: Heselden had just donated millions to charity days before.