The Walking Dead Is Getting A Spin-Off Series, Unfortunately Does Not Star Daryl Or Michonne 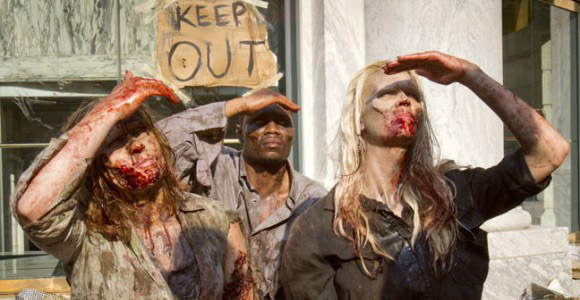 AMC has decided to make another The Walking Dead-based television series but without any of the characters you know. (Is this where I make the joke about that show already being on air?) I hereby dub this new series, Other Walking Dead, à la Coraline.

The original series, based on Robert Kirkman’s comic of the same name, is about to head into its fourth season on AMC and has broken several ratings records for the network. Perhaps that’s why they’ve decided to double down? Kirkman, along with producers Gale Anne Hurd and Dave Alpert, will develop Other Walking Dead.

“I couldn’t be more thrilled about getting the chance to create a new corner of The Walking Dead universe,” said Kirkman. “The opportunity to make a show that isn’t tethered by the events of the comic book, and is truly a blank page, has set my creativity racing.”

Again, one could make the argument of the current show not being tethered to the comic, they’ve certainly gone their own direction a lot of the time, but a second show could create something entirely different. The possibilities are pretty much endless. Kirkman also tweeted, “I hope you’re as excited as I am. I promise this is going to be VERY cool.”

“Building on the success of the most popular show on television for adults 18-49 is literally a no-brainer,” said Charlie Collier, AMC’s President. “We look forward to working with Robert, Gale and Dave again as we develop an entirely new story and cast of characters. It’s a big world and we can’t wait to give fans another unforgettable view of the zombie apocalypse.”

AMC recently announced Better Call Saul, a spin-off (and likely large departure) of their hit Breaking Bad. The Walking Dead Season 4 premieres October 13th on AMC and Other Walking Dead should see a premiere in 2015. What would you like to see from a spin-off?