What Did You Miss On The Walking Dead This Week? | The Mary Sue 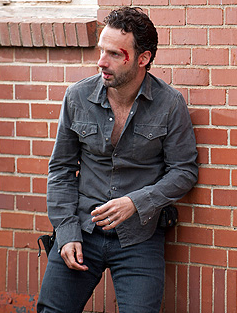 When we asked coworker Sarah Devlin to recap The Walking Dead as a regular feature for us, we didn’t know she was sensitive to violence and gore! Oh well… Needless to say, spoilers behind the jump.

Oh, the rough life of a The Walking Dead novice! I found this week’s episode a bit difficult to follow, and I’m not totally sure if it’s because of my inexperience with the show or a writing issue. This week the episode was roughly divided into two parts — the goings on at the farm, and Rick and Shane’s mission to get rid of the stray human they picked up on their last journey into town. Or, as I like to call them, “Boring House On The Prairie” and “Thelma And Louise — This Time With More Braaaiiiiinnnnns.”

Let’s get the dull stuff out of the way first: Lori is trying to make things on the farm resemble real life as closely as they can, so she’s making a lot of sandwiches and trying to soothe everyone’s anxiety. This makes everyone hate her, as Andrea doesn’t see the point of pretending that their lives are normal when they could be killed/zombified at any moment, and insults Lori for being self-involved and relatively unscathed so far, while everyone else has had to experience the difficult deaths of their loved ones. Beth is feeling so desolate, in fact, that she asks Maggie to join her in a suicide pact. While Maggie is horrified, Beth is determined, and locks herself in the bathroom to make a deep cut into her arm. Lori breaks into the bathroom before she can harm herself further, and she decides that she wants to live. Andrea thinks she needed that experience in order to make her decision, but Maggie disagrees and throws her out of the house. Lori does not object, probably because she is still stewing over Andrea’s comments about her lemonade. I may be new to the show, but I am quickly learning that Lori is the worst.

Rick and Shane are on a bit of a road trip to take the stranger whose injuries they treated at the farm 18 miles away to leave him to fend for himself. On the way, they stop for a bit of a heart to heart in the middle of the road. In the course of their man talk, Rick lays it all out — Shane and Lori’s romance, his suspicion that Rick can’t protect his loved ones, and Shane’s belief that Lori’s unborn child is his. Rick tells him “You don’t love her. You think you do but you don’t. Now, the only way you and me keep on is that you accept everything I just said right here, right now, and we move forward with that understanding.” That tentative truce struck, they return to the car where they were keeping Mystery Dude in the trunk the whole time! How rude. I can’t stop picturing him eavesdropping on their conversation, rolling his eyes.

Once Rick and Shane reach a parking lot that is the requisite 18 miles away, they stop to let Mystery Dude out. He begs for his life, appealing to their sense of humanity, and it isn’t long before Rick decides to take him back to the farm and think it over. An argument over who is better equipped to take care of everyone at the farm ensues, with Shane firmly in the “Who Cares What Happens To Mystery Dude” camp, and it ends, as these kinds of fights so often do, with a fist fight. This important work is interrupted by a horde of walkers who come streaming out of a nearby building, and who separate Shane and Rick. Mystery Dude is able to defend himself from the walkers (he breaks a “female” walker’s arm, and then says “Come on, bitch, let’s see what you got,” which is the moment that put me firmly in the “Who Cares What Happens To Mystery Dude” camp). He and Rick rescue Shane, who is trapped by the walkers in a school bus, and speed away from the scene. Mystery Dude is so annoying about this getaway that Rick and Shane put him back in the trunk, which gives them the opportunity to have A Moment. They are Bros now, and all three of them are heading back to the farm.

Grossest Moment: I’d say it’s a tie between seeing that lady-walker’s arm bones break under Mystery Dude’s foot, and Rick plunging a knife into a walker’s skull (after offering him his bloody finger like he was an animal at the zoo) and seeing it’s purple blood and braaaaaiiiiiinnnnns explode everywhere.

My Anxiety Level In This Episode: 3. My blood pressure kept getting raised by the fight in that parking lot, and then lowered to “Good grief, I need a nap” levels for all the scenes at the farm.