The Walking Dead Creators On Lifting An Episode From The Comic 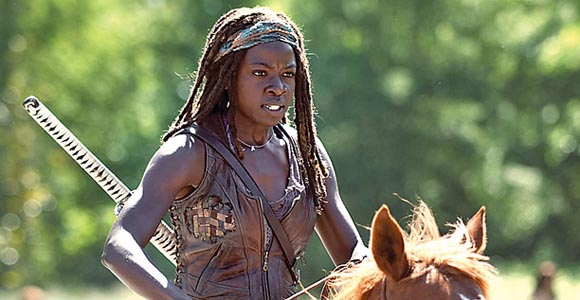 AMC’s The Walking Dead has pulled many characters and plots from Robert Kirkman’s comic of the same name but it’s also ventured into new territory. So what can we expect from Season 4? Hit the jump to find out.

Considering I won’t be returning to watch this season, I’m happy to read any and all information about where they’re taking the story this without ruining anything for myself. Your mileage may vary so beware of spoilers ahead.

The Hollywood Reporter got 14 teasers from the creators. Here’s the one I find most interesting:

While the series is taking the above remix approach, EP Greg Nicotero previewed that an episode coming up later in the year is “almost verbatim” with one issue of the comic. “It’s really fascinating to make those slight departures, introduce new characters and then get to a situation where you take one episode and you really stick to the source material. You’ll be surprised about the way the characters lay out.”

I know others feel differently, but I’m the type of person who longs for adaptations to be translated direction to the screen. They rarely are, so I may just find myself watching at least one episode this season. While Merle has one less hand than he used to, many are still wondering if Rick will share his dilemma, a key scene in the comics.

While Rick and the Governor (David Morrissey) are yet to have their epic face-off — the first of which in the comics [SPOILER ALERT] ends with the former’s hand being brutally chopped off — [Dave] Alpert says that may still be in the cards. “It was one of those things where, given all the other things going on [in season three], we decided it was too much to put on. That’s not to say we’re not going to do it later, but there’s too much of a burden.” Adds [Andrew] Lincoln with a smirk: “I keep saying we should do it, so maybe that’s going to happen!”

And apparently there’s something else looming besides The Governor and walkers in Season 4. New showrunner Scott Gimple said, “It’s someone we haven’t seen before. Someone unusual; you can’t stab them in the face, you can’t reason with it. It’s a force that would be dangerous in this world and in the world of The Walking Dead, it’s terrifying.”