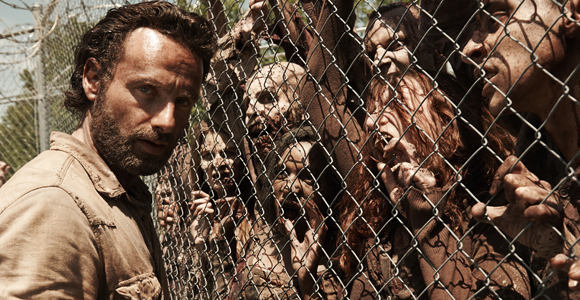 Fans of AMC’s The Walking Dead will be glad to hear, you can expect the zombies to stay hungry for another year.

We’ve passed our The Walking Dead recap duties over to Geekosystem this season (have you been reading them?) but have certainly been keeping up on the latest news. This time, it’s the official renewal announcement.

“We are very happy to make what has to be one of the most anti-climactic renewal announcements ever: The Walking Dead is renewed for a fifth season,” AMC president Charlie Collier said in a statement. “This is a show that has erased traditional distinctions between cable and broadcast. Its expanding base of passionate fans has grown every season, most recently — and most notably — with the season four premiere earlier this month, which broke viewership records for the series and became the biggest nonsports telecast in cable history. On behalf of the incredible team on both sides of the camera, thank you to the fans and here’s to more Dead.”

Not bad, and certainly a boost for current showrunner, Scott Gimple. But has Robert Kirkman’s comic adaptation finally found someone they can live with for more than a season or so? Yes. AMC said Gimple will return as showrunner for Season 5.

While Season 4 plays out, we’re still waiting to hear what Other Walking Dead, the officially announced spin-off, will entail. Last we heard, they didn’t actually have a concept yet.