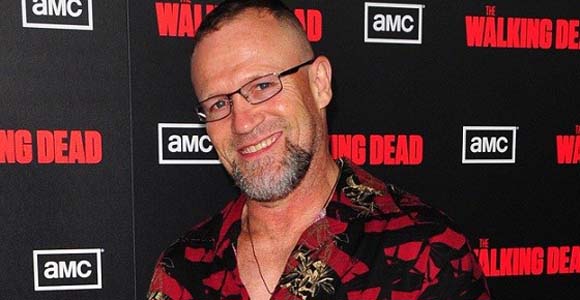 Michael Rooker is headed to space. The Walking Dead star has been cast in Marvel’s Guardians of the Galaxy. So, who will he be playing? Hit the jump to find out!

Many were hoping the actor, who’s good friends with director James Gunn, would voice Rocket Racoon. If you were one of them, I’m sorry.

Rooker will play the character Yondu. If you’re not a comic reader but have been following news about this particular movie, you’ll notice this isn’t one of them names previously announced for the film. Star-Lord, Gamora, Drax the Destroyer, Rocket Raccoon, and Groot are the “Guardians” for the film but Yondu was a founding member of an earlier version in the comics. He’s a blue-skinned hunter-warrior from another world and his people fled when Earthlings started to colonize.

Yondu doesn’t have traditional superhero powers but does have a limited sixth sense that allows him empathic abilities with other beings. Rooker will join Chris Pratt, Zoe Saldana (presumably), and David Bautista in Guardians of the Galaxy.

It’s worthy of noting Yondu lost one of his hands in the comics, much like Merle from The Walking Dead. I wonder if Gunn is going to make him hide a hand for another few months…What do you think of the casting?