The Walking Dead Promises to Completely Gross Out Viewers This Season 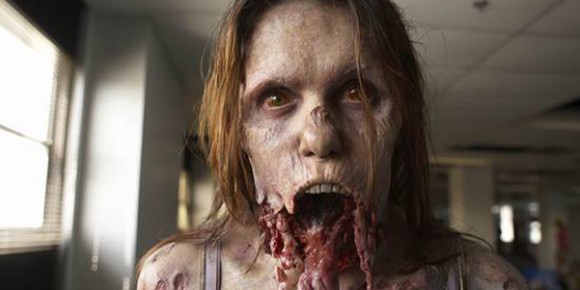 While watching the zombies attack the survivors on AMC‘s The Walking Dead, did you ever wonder what people tasted like? Or maybe why zombies crave living flesh so much, perhaps because it has a tangy, gamey texture, but in a good way if you’re a bloodthirsty zombie. Well, whether you like it or not, executive producer Robert Kirkman, who also wrote the graphic novels on which the show is based, is going to get into the “digestive issues” of the zombies this season. Yay!

“We never really got into all the nutritional components of a zombie’s diet or what a walker eats on a regular basis.”

So says Kirkman, who has apparently spent a portion of time thinking about this, and we think that’s delightful. And it raises an interesting point, like do the brains of certain people taste different than other ones? Is eating a human liver or trachea good for sensing living prey, or have an effect on a zombie’s sense of smell? But more importantly: why do zombies really want to eat us? Are we that much of a delicacy? We will have these questions answered this season, thank goodness! He continues:

“We’re going to learn a little bit more from scientific point-of-view about their nutritional composition. It’s an all-encompassing exploration of the digestive system of a zombie.”

Kirkman also promises that this season might be gross enough to make us puke. The phrases he uses are “cross some lines,” “visceral,” and “punch,” and then he instructs us all to “hold onto [our] seats” after winking at Michael Ausiello from TV Line. After hearing all of this, I’m going to be really disappointed if I’m not completely light-headed after this season of The Walking Dead. October 16, everyone.

(TV Line via The Daily Blam)