Not A Fan Of Blood? AMC Is Giving Us Every Episode Of The Walking Dead In Black and White 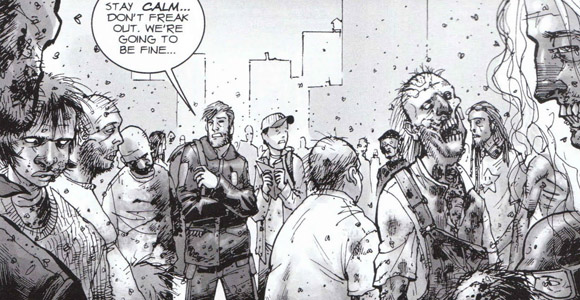 If you’ve watched even one episode of AMC’s The Walking Dead, you know blood is on the agenda. And not just a few drops. Usually it’s spraying or gushing. But unlike the AMC show, Robert Kirkman’s comic is actually presented in black and white. So the channel has decided to give us a special treat by airing the episodes the same way.

You may remember a while back AMC aired the premiere episode of the zombie series in black and white. I didn’t catch that one but I thought it was a cool idea. The announcement for the entire series to be given the old-school treatment came in the official Walking Dead magazine.

But it’s not just for the sake of gore relief (there’s still plenty to see), the network hopes to harken back to a previous era of horror.

It says, “Giving the series a Universal Monsters feel as well as mimicking the artistic style of the comic, this new way of enjoying the TV show ahs been fully endorsed by The Walking Dead creator Robert Kirkman and should prove very popular with fans of the comic book.”

There’s also a planned marathon of the normal versions on New Year’s Eve and Day. Are you excited to watch the series in black and white?