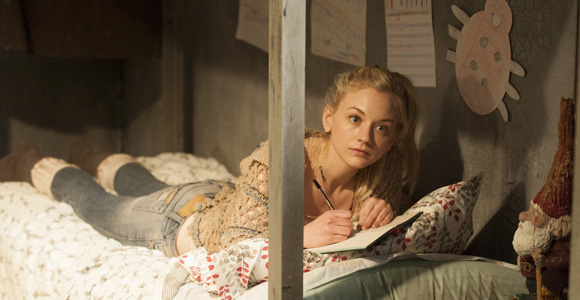 The most recent episode of AMC’s The Walking Dead (recap here!) introduced several new characters. Not ones invented for the show, but transplants from Robert Kirkman’s comic book. It also touched heavily on a topic we made fun of not too long ago with The Walking Dead memes. We’re talking of course about Beth’s diary. Hear what one of the new recruits and the actress who plays Beth had to say about their recent apocalypse activities.

With intention I’m sure, the latest episode began with a voiceover from actress Emily Kinney saying, “Hey, I know it’s been a while. I’m gonna be honest, I forgot about you.” She was reading an entry from Beth’s diary, which we saw earlier in the season, while making an ironic statement on the character who’s often left chewing scenery in the background. But with the prison group now splintered, Beth is getting her chance to shine. The actress spoke with Entertainment Weekly about just that:

It’s nice because the audience hasn’t gotten to know Beth this whole time. She hasn’t been in every scene, she hasn’t been necessarily the focus of the show. And I think that having that moment — seeing that she has been going through all these same things and having thoughts about them and having feelings about what she’s been going through — the audience gets a chance to hear what it is that she has been thinking with those journal entries. So it was very satisfying for me as an actor to fill in some of those gaps. And I’m sure for the audience it’s nice to get to know Beth a little bit better in that moment.

Beth and Norman Reedus’ Daryl are currently paired up for survival, something new for both the actors and the characters. Kinney said it was nice having that parallel of them both getting to know each other. As for the characters specifically? “I think that Beth feels very alone and Daryl isn’t the most open person in the world, so even though she has a partner in this, she still feels extremely alone,” she said. “The journal too is kind of showing just how much she was holding onto this idea of the prison, and during this episode she is still holding on to this idea that maybe there is a way to get back to having that group, or having some sort of family, having some sort of stability by searching for the kids and searching for other survivors.”

Three new characters also entered the series in the latest episode: Abraham (Michael Cudlitz), Eugene (Josh McDermitt), and Rosita (Christian Serratos). Cudlitz spoke with The Hollywood Reporter about how his character will compare to the comic version.

“All three of those characters are going to seem extremely familiar to those who know the comics. They’re almost exact up to the point where we meet them. Where they go from here, we’ll all learn that together,” he said. “[Showrunner] Scott M. Gimple told me that Abraham’s backstory would closely resemble Abraham in the comics, so that was a great place to start my research. A lot of things happen in the comic that affect how he operates and how he moves through this world and the decisions he makes. A lot of that is ripped directly from the comics, as well as the whole chunk of time where the comic left off and where we meet them now.”