The zombie enthusiasts at Geekosystem are recapping season 4b of The Walking Dead so we don’t have to. Feel free to talk about what went down last night in the comments below. Or talk about stuff and things.

Wait — what’s this? Another episode with minimal to no Rick Grimes? The second half of this season is looking better and better all the time.

Last time on The Walking Dead: Rick and Carl and Michonne were all wandering around feeling bad, and it was a lot better than that sentence makes it sound. Also, remember when The Governor totally decapitated Hershel and then the two awesome lesbians freaked out, and Maggie got Glenn on the bus out of the prison but then went back for Beth and it left without her? That’s kind of important.

The episode starts with an odd flashback voiceover of Beth telling her diary about the prison they found and how it’s totally going to be the best thing ever and they’re all going to be a safe happy family full of hope and dreams and magic, or whatever. This is obviously meant to be ironic. Underneath the voiceover, Beth and Daryl are running from walkers. She’s out of bullets, but Daryl protects her with his crossbow until they make their way out of the forest and into an adjacent meadow, where they finally collapse.

After the credits, it’s nighttime. Beth and Daryl have built a fire, and Beth wants to “do something” about the other prison survivors who may or may not still exist. Daryl is non-responsive, so Beth barrels out into the night without him to go tracking.

She’s back at dawn, of course, and finally Daryl puts some of his tracker knowledge to use and comes across a little pair of footprints that might be Lizzie’s or Molly’s (and of course I don’t even remember who Molly is). It means they were alive four or five hours ago, Daryl says sardonically. He also stops to point out that having faith is meaningless and her decapitated father was the only thing holding them together at the prison. Beth does not appreciate this. 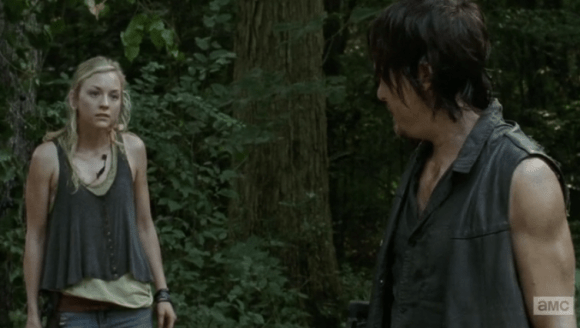 “Make fun of my dead father all you want but don’t talk shit about beliiieving.”