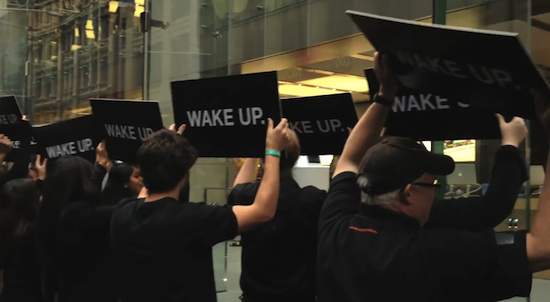 Last weekend, a group of black-clad people carrying pre-printed signs poured out of a black bus outside the Sydney Apple store. They chanted “wake up!” and shook their signs which bore the same slogan. Most assumed it was some kind of guerrilla marketing campaign, with Samsung being a likely candidate. However, the Korean electronics maker has denied any involvement.

According to Slashgear, Samsung is as confused as anyone. Samsung representatives are quoted as saying: “Samsung Electronics Australia has nothing to do with the ‘Wake-Up Campaign.”

Samsung was the presumed force behind the event as their recent ads have portrayed Apple fans as ignorant “iSheep” who ignore the obvious benefits of Samsung ownership. That might be a bit of a sarcastic summation, but the recent ads have poked fun at Apple fans waiting in line for products while touting the enhanced features of the Galaxy phones.

In their original reporting on the Wake Up flashmob, Android and Me says that it was put together by the Tongue marketing group. A website, apparently associated with the event, is believed to be counting down to a date sometime after the unveiling of the next Samsung Galaxy.

It’s possible that Samsung really isn’t involved with the event, and that once the website finishes counting down that we’ll all be let in on the joke. Of course, it’s equally possible that this bewildering event didn’t get the reaction Samsung wanted and they’re simply disassociating themselves with it.

However, someone paid to have those signs printed;those busses rented and customized; and presumably paid those protestors. Like always, we’ll just have to wait and see.

Macworld reports that Blackberry maker Research in Motion (RIM), of all people, might be behind the campaign. They point to a Doubleclick identifier (http://fls.doubleclick.net/activityi;src=2215527;type=black822;);) found in the Wake Up website source code which, when Googled, takes you to the Blackberry Australia website.

And while I thought it was suspicious that the video’s creator Blunty “just happened to be at the Apple store” to film the event, Macworld points out that he’s been extremely friendly to RIM in the past.

What’s more, the Wake Up website appears to be counting down to the day of the Blackberry OS 10 release on July 2. Is this the smoking gun?

(Slashgear via Techmeme, Android and Me)