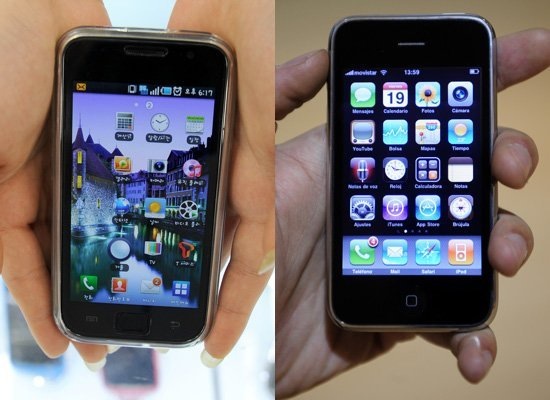 There’s no denying that Apple has been extremely influential in consumer product design, but in a recent lawsuit with Samsung, Apple has accused its competitor of going a step further than merely soaking in vague influences in the air: Samsung, Apple alleges, has “slavishly” copied Apple’s iPhone and iPad. Apple’s suit singles out Samsung’s Galaxy Tab, Nexus S, and Epic 4G as “infringing products,” claiming that they copy Apple’s “technology, user interface and innovative style.” Above: The Samsung Galaxy S side-by-side with the iPhone 3GS.

Ars Technica speculates that Samsung’s TouchWiz interface may have particularly rankled Apple, “toeing the line in its mimicking of iOS.”

If this suit sounds familiar, it should: Apple is also involved in lawsuits with HTC and Nokia over allegedly infringing upon iPhone patents, although the US International Trade Commission recommended yesterday that HTC and Nokia not be found liable. Once again, Apple’s lawsuit could be seen as a maneuver in its cold war with Google for the smartphone (and now, tablet) market: the Samsung devices called out in the suit are all powered by the Android operating system.

(WSJ via Ars. pics via HuffPo)