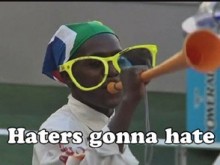 Remember vuvuzelas, those annoying, high-decibel plastic noisemakers that everyone got obsessed with during World Cup season and then promptly stopped talking about? Game maker Ubisoft does, and it’s incorporated them into a Michael Jackson-themed Nintendo DS game as an anti-piracy measure. This just may beat the whole StarForce thing.

If you pirate the game (which Tiny Cartridge says isn’t particularly good, for the record) and attempt to play the ROM, touchscreen cues won’t display, and, more troublingly, the shrill sounds of the vuvuzela will buzz over the music in the game, drowning it out.

Check it out below:

If more DRM was like this, clever and with a light touch, and effective in ruining gameplay for pirates but unobtrusive for law-abiding customers, maybe it wouldn’t be so widely disliked. Right?