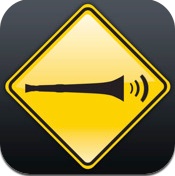 If at the end of a day’s World Cup viewing, you think to yourself, “gee, that was fun, but my life could use a little more of that irritating bee-like buzzing instrument that all of the fans were playing,” has app developer mobilio.nl got good news for you! Their vuvuzela app promises to give you just that, during and after the game.

Available for free for the iPhone, the iPod Touch, and the iPad, “Vuvuzela 2010,” a.k.a. “iVuvuzela,” simulates the buzzy horns that deafen soccer fans, interfere with on-field communication between players, and were considered for a full-scale ban during the tournament by FIFA, who ultimately decided to let them stay.

Lately, the app is a sensation:

According to its app store description, the vuvuzela app has been downloaded more than 750,000 times internationally, and it is the “#1 iPhone Free App in Argentina, Austria, Brazil, France, Germany, Greece, Portugal, Italy, Netherlands, UK and South Africa.” This might be a bit of an overstatement: According to the top app of the world chart, it’s actually #2 in France. But even if it’s largely being used as an annoyance, the app’s international appeal could be just the sort of thing FIFA’s chief communications officer had in mind when he said that vuvuzelas were no longer “a South Africa instrument alone … [but an] an international instrument.”

Vuvuzela 2010 is available for download at the iTunes store.