Star Trek: Voyager Has the Most Rewatched Episodes on Netflix, so We Must Be Living in the Mirror Universe 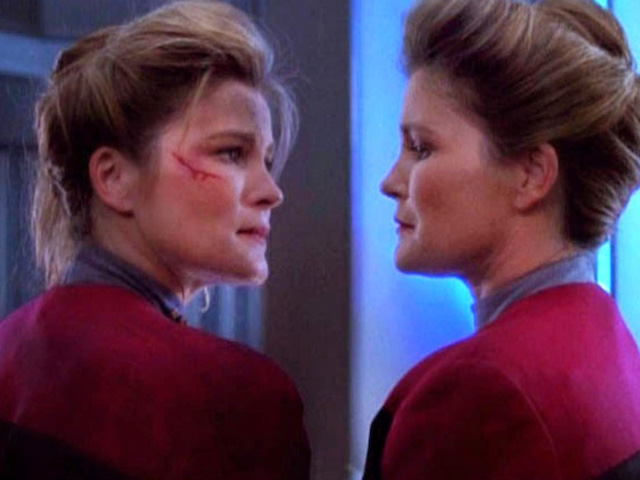 Up is down, down is up, and the Star Trek episode people are rewatching the most—actually replaying because they love it so much?—is the season finale of Voyager, which is … not the greatest. At ease, ensign, I don’t understand it either.

This is not an article that will disparage Star Trek: Voyager. Voyager is not a bad Star Trek series, though it has its flaws, as does every Trek. The best Star Trek is Deep Space Nine. But I recently completed a Voyager rewatch and was surprised how much more I enjoyed the show now than I had in youth. The steely Captain Kathryn Janeway struck me as a feminist revelation, and I would follow my lady captain through all the self-destruct sequences she wants to set. All of Voyager‘s women are incredibly strong and complex, come to think about it. Additionally, The Doctor is one of the better Trek characters written, evolved, and acted (fight me), and I even love the sappy holodeck episodes set in fake Ireland.

What this article will be is surprised that the most-rewatched Netflix episodes are majority (6/10) Voyager—with #1 the two-part Voyager finale “Endgame” that I could have lived for a long time without ever rewatching. Here’s what Trek fans apparently want, per Netflix: 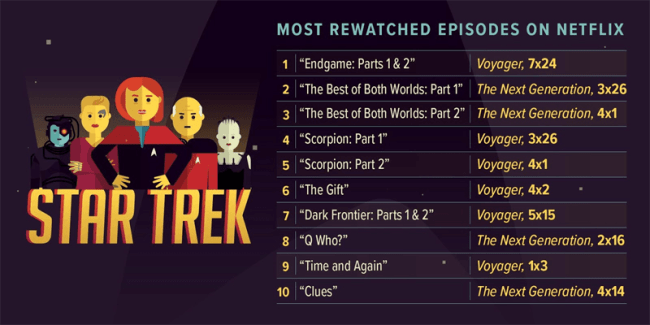 The Next Generation picks here don’t leave me scratching my head. “The Best of Both Worlds” arc is famously some of the better Trek story-telling ever and have been fan favorites since 1990. Captain Picard becoming Locutus of Borg still stands as one of the more masterful season finale cliffhangers of all time (fight me). “Q Who?” is another classic, featuring John de Lancie’s puckish, complicated, omnipotent entity—another fan favorite, plus the introduction of the Borg. And “Clues” is an intriguing mystery of an episode. None of these choices seem out of place.

But the Voyager episodes here, in my mind and memory, in no way number among Voyager‘s finest episodes (maybe “Scorpion” gets a pass?). And most pressing: where is Deep Space Nine, the best Star Trek? Where is the original series? Where even is Enterprise? You’re telling me people are watching “Endgame“ again and again but not “In the Pale Moonlight?” Not “Trials and Tribble-ations”? Not “Far Beyond the Stars”? Not “Improbable Cause”? Not “Necessary Evil”? Not “What You Leave Behind”? (Deep Space Nine y’all.) Not “The Inner Light”? Not “Yesterday’s Enterprise”? Not “The Outcast”? Not “Living Witness”? Not “Deadlock”? Not “Year of Hell”? Not “Broken Bow”? Not “Similitude”? Not “Mirror, Mirror?” Not “Amok Time”? HAVE WE FORGOTTEN ABOUT “THE CITY ON THE FREAKING EDGE OF FOREVER”? WHAT HAVE WE BECOME?

When I first saw this list, I thought that maybe Voyager‘s episodes ranked so high because the series could have more new viewers on Netflix, who were using the streaming service as their first time to watch the show in its entirety. Originally airing on the failed network UPN, Voyager (and Enterprise) didn’t have as large of a TV audience as some of the other Treks, so it stands to reason that it might have more curious Netflixers. But no, this list is ranking rewatched episodes. Meaning people watched “Endgame” and then they watched it again.

Because the only other logical explanation is that we’re actually living in the mirror universe—which actually would explain a lot, especially President Donald Trump—and somewhere, in universe prime, there’s a Netflix most rewatched Star Trek episodes that actually makes sense. Let’s help make it. What’s on your list?

P.S. Your homework assignment tonight is to go home and rewatch “In the Pale Moonlight” as many times as possible.

P.P.S.S. We can talk a lot about Jeffrey Combs, though.